A Snapshot of School and Community – 1970s

The Montville History Group asked pupils from this 1977 School photo to share their memories of growing up in Montville and to tell a little of themselves today. Here is Mark Pobjoy’s contribution. 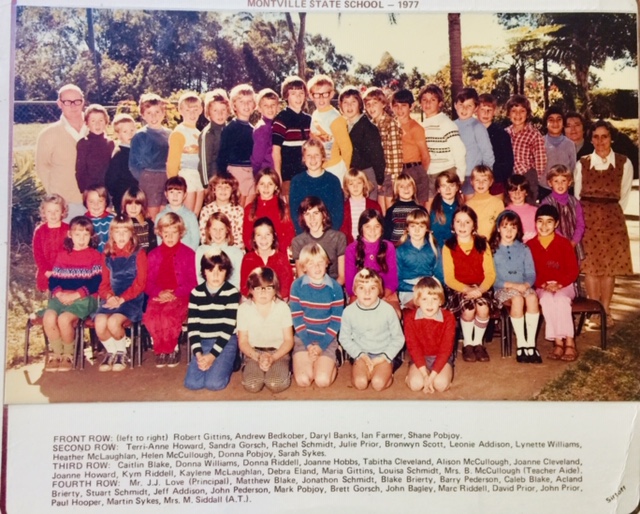 I grew up and lived in a small weatherboard cottage (which is still standing) on 4 acres of pine trees (since sub-divided) along Flaxton Rd (now Main st) 3 doors down from the old dome. My parents are Barry and Joan who have since retired in Nambour.

Dad initially worked at the Sugar mill and was on the cane trains chuffing around the Sunny Coast, later drove the Trittons truck delivering all over the Coast, (Trittons was the 70’s version of Harvey Norman) everyone on the range knew that truck with the big T and was probably furnished by Trittons.  Mum was the domestic commander and chief (housewife) and involved in the P&C.

I lived my whole childhood in Montville 1965-1981 before joining the military for the next 20 years.

My grandparents Dave and Ailsa Shanks lived opposite and operated a Pineapple then Avocado farm during the 1960-70’s. Their old house is now a classy B&B.

My younger siblings (Donna & Shane) also attended Montville Primary and are in that photo. I did all my primary at Montville grades 1-7 (1971-1977) and Joe Love was the principal the whole time I was there and was a fantastic role model/mentor. Ms Walden was my junior grades 1-3 teacher and everyone remembers her VW beetle.

1977 was my final year before starting high school at Nambour SHS. Kids came and went over that time at Montville but the constant trifecta (3 Stoogers/3 Amigos) was myself, Jonny Bagley and Brett Gorsch altogether in this photo in the same year together for all seven years and then continued on at Nambour SHS.

The Bagley’s lived in and ran the local general store/petrol station so Jonny was always in charge of getting 10c lollybags and the Gorsch’s had a big pineapple farm on Western Ave. They also both had siblings that went to Montville primary.

My outstanding school memory has got to be the science lesson with Joe Love, he had 10 of us hold hands as he pull started the mower whilst holding the spark plug lead ⚡️😳. And of course anytime we beat Mapleton in sports 😏

We never had enough kids for a footy or cricket team so would join forces with Mapleton to field teams to take on Maleny, Palmwoods and Woombye. I have some photos and certificates from the inter-school sports days. We were good at tunnel ball!

Another daily game played by all kids often before school and at lunchtime was the Red Rover tag that often had the same hard hits as State of Origin footy.

Other stand out memories was the original Christmas mural with all our names on it done under the artistic direction of Mr Lee and the school dances doing the Maypole, Pride of Erin and many more carefully choreographed by the teaching staff.

I hold only very fond memories of Montville Primary, Mrs Brown the librarian, the roster of mums running the tuckshop (open only once a week) under the direction of Mrs Farmer who also had a tribe of kids at the school.

Growing up in Montville certainly laid a great foundation for life and can be attributed to the outstanding educators that molded young minds and to the whole community who revolved around and supported the primary school and most of that was because of Ol’Joe. I certainly believe it played a big part in my grounding before the 20 years I spent in the Navy & Airforce.

Back then there was only the General store, Pottery, post office and Mr Lee’s art studio. All the houses in the Main Street were homes. Montville has certainly tastefully evolved and grown. Whenever I get back to the Sunshine Coast I always take a drive up to Montville and visit my grandparents plaques in the memorial garden.

I now reside in Perth and work in mining across the Asia Pacific region writing this piece from Colombia, it’s a long way from modest beginnings in Montville.

So many memories of Montville State School

Playing war games under the big fig trees, marching around the oval in time with the drum in preparation for sports day, and our much respected principal,  Mr Joe Love. Also we had Tuckshop on Tuesdays where all the food was made by our Mums. Toasted mince sandwiches cooked in a frypan and Mrs Farmer’s jelly slice.  All 4 of us McCullough kids went there from early 1963ish  to 1980 and our Mum Beryl in the photo is the teachers aide. And yes, we loved beating Mapleton at anything.