A History of Montville Tourism

Timber-getting and agriculture were the first industries here.  From the 1880s the first ‘white settlers’ cut into the rainforest (they called it vine scrub) to build a home.   They sold the valuable timbers – red cedar, beech, hoop and bunya trees. 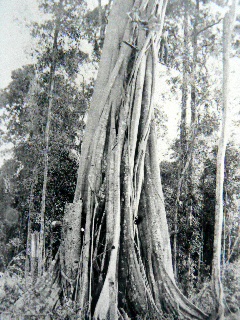 They grew Cape gooseberries in the new clearings after bushfires and by the mid 1890’s, the gooseberries were being harvested and sent to jam factories in Brisbane. Quick growing bananas and strawberries were planted among the slower cropping citrus and pineapples.  Pretty soon these farms covered the plateau from Montville to Mapleton. 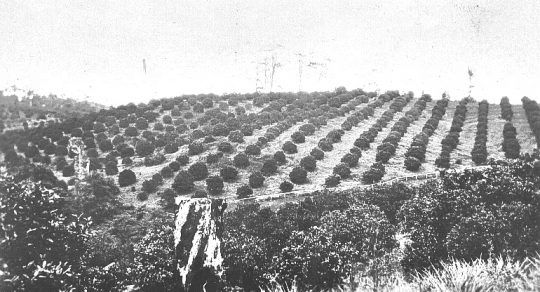 Oranges and mandarins were marketed mainly to Brisbane and the southern States, but some were shipped as far as England. In 1930, the first Queensland nut or macadamia nut trees were planted and by 1945, the avocado orchards were flourishing and continued to until the 1990s. 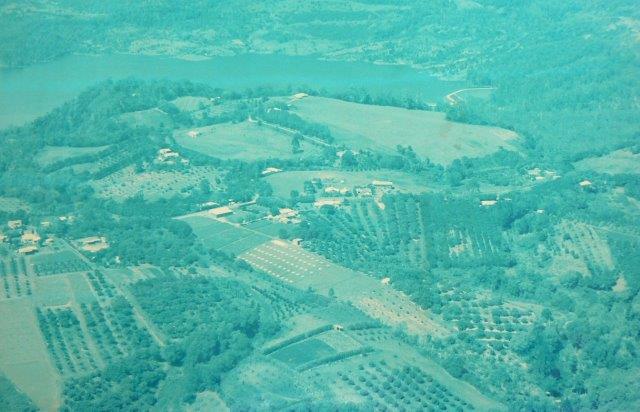 During the first half of the 1900s, Montville, was also a thriving mountain holiday resort, with its cool summers and mild winters. Several guest houses – including ‘Elston’, ‘Manjalda’, ‘Mayfield’, and ‘Belvedere’ – prospered, attracting visitors from all over Southeast Queensland.

Elston was the first of the guest houses – built around 1900 on about fifteen acres south of the village, just this side of where Clovelly stands now. 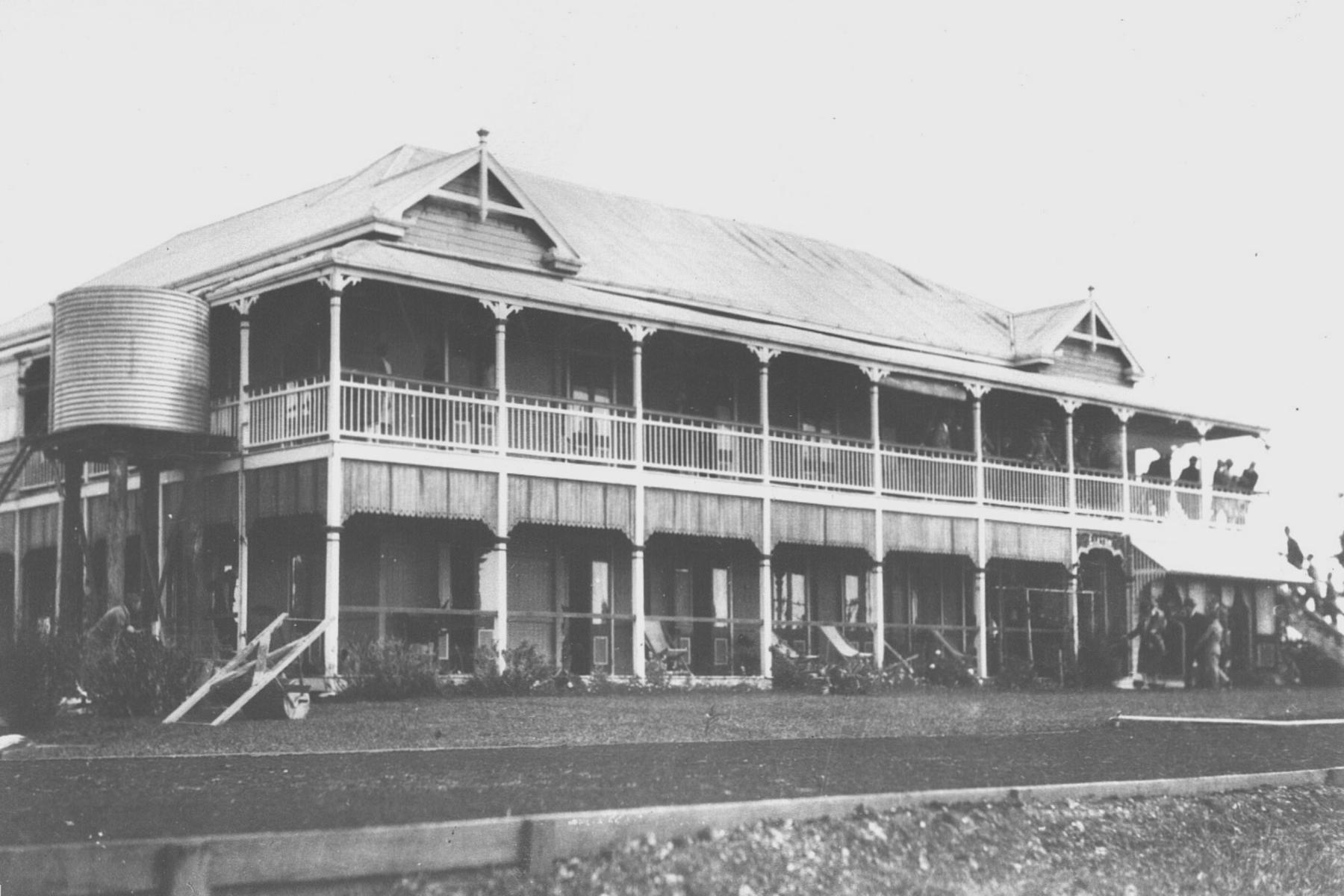 The front of ‘Elston’ Guest house

Originally it was a one-storey building, then in 1906 new owners raised it into a two-storey building, adding a kitchen, dining room, lounge and their own and staff quarters on the ground floor. At peak holiday times, it could accommodate fifty guests and was a major venue for convention groups, Masonic Lodge dinners and large holidaying families and other groups.

It boasted many facilities in its heyday, both natural and man-made. It had a creek with a beautiful waterfall and a swimming pool constructed out of local rock, complete with diving board. 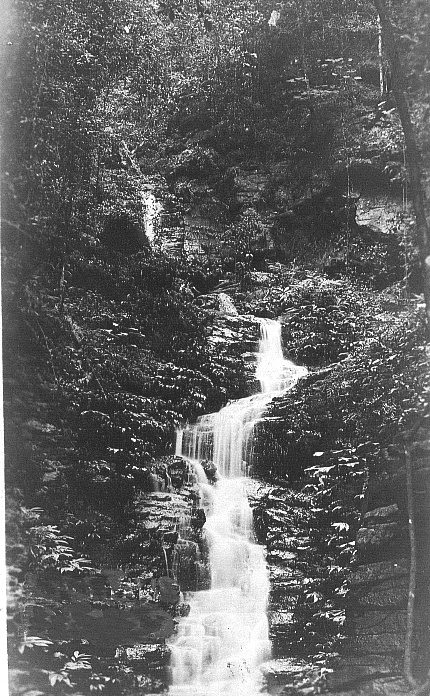 A bowling green and tennis court, horse riding, croquet, table tennis and bush walking completed the activities available to guests and, together with stunning views of the Coast, reportedly good food and comfortable accommodation made ‘Elston’ a very desirable destination for over 50 years.  There are photographs showing advertisements with ‘Elston’ having a milk bar selling ice creams, ice blocks and confectionery.

It was used during the Second World War for soldiers on R&R when the doors were blacked out and special shades were used to cover the lights at night. It was in the 1950’s that ‘Elston’ unfortunately burnt down, a victim of bushfire (or some suggest, an arsonist), and guests at the time were forced to jump from the verandahs as they became cut off from the stairs. Don’t forget that these Guest Houses operated under slightly different circumstances from today.

Telephone came to Montville in 1925 followed by wireless in 1930.  Electricity made it just before WWII in 1939 with the line coming direct from Brisbane.  Farmers were paid a pound per pole to have the line running through their land.

Just next door to the Village Hall and St Mary’s Church, on the site where the Mayfield building is now, the Guest house, ‘Manjalda’, was built in 1915 designed to accommodate about 35 people.

The building was not enclosed underneath when it was first built, and apparently the local echidnas spent a lot of time there digging up ants’ nests.  Because it was dry dust under the building and boarding house scraps were plentiful, it was also a popular camping spot for numerous cattle dogs, being near the bullock teams main stop on what is now the Village Green. But apparently both these animals left their fleas behind.  Now and again the fleas got upstairs, and the owners spent some time spreading “Insectobane” and sump oil to deter the critters.

If you stayed at ‘Manjalda’ you could rub shoulders with the rich and famous, Montville was a major convention centre and a favourite spot for honeymooners.  The area also provided early package tours too.  One caught a train to Palmwoods and was collected by bus or car, then deposited at ‘Manjalda’ to laze around the pool, go bush walking, or enjoy a day trip put on by the bus driver.

All this tourism was undertaken without the mod-cons we have today.  Local Radio 4NA (Nambour) came in 1968, although many families had been listening to the news and stock reports for many years from Brisbane stations. The times they were a changing.

The 1960’s heralded the end of the Guest House era.  Holden cars became affordable and people could travel further afield.  One by one the guest houses closed down – or burnt down!  During the last Christmas holiday period before it closed in 1968, there were reputedly up to 90 guests staying at ‘Manjalda’, with a tennis court and croquet lawn as well as the “pool with a view”.

The ‘Manjalda’ building survived a few more years. It had a few different owners and one of these apparently established a Maritime Museum.  There is a tale that you had to walk through a prawn trawler to get to the front door. It was certainly a talking point!

Then in 1974, the neglected building was restored by the de Lisle’s and they established it as an Art Gallery.  From 1990 Tony and Joan Page were the last owners and proprietors of the Montville Art Gallery in ‘Manjalda’, until the devastating fire on Saturday morning, August 26th,1995, which totally destroyed the building in just over half an hour. 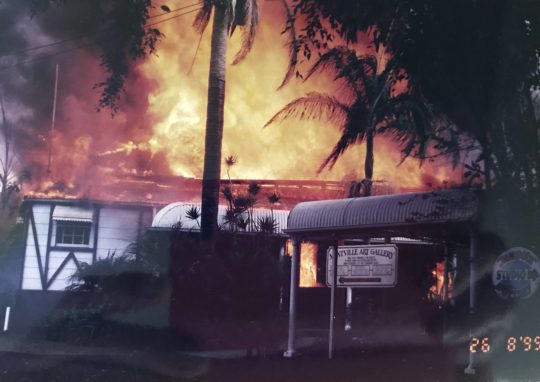 Our local fire brigades were on the scene very quickly, and thankfully were able to save the adjoining St. Mary’s Church.

The Pages investigated the idea of re-building for some time, then decided to sell the site and established Montville Art Gallery across the road.  The site remained until around 2000 when John Hargreaves from the ‘Mountain Inn’ built the complex called “Mayfield”.

The original “Mayfield” was the Guesthouse that was on the site where the ‘Montville Cafe Bar and Grill’ is now. 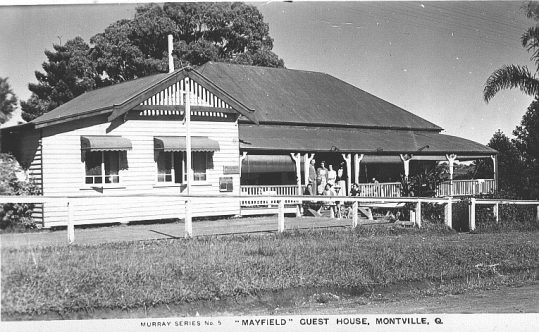 The ‘Mayfield’ burnt down in the late 1930s. The first owner had cut off 37 acres of his original land and built a new home, Braemar, (the grey house which is on the northern side of ‘The Montville Mountain Inn’). 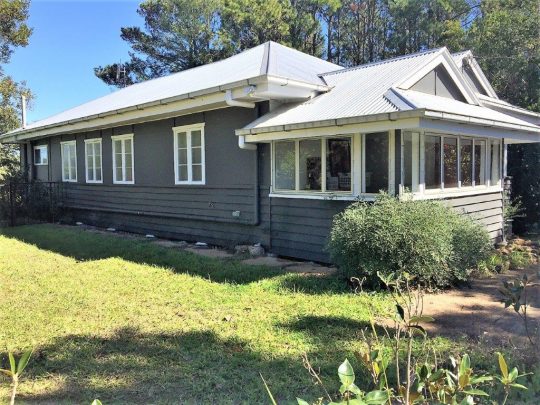 Braemar, in 2017, originally built for the Monte Dart Family

By the early 1930s they had a gladioli nursery of 6 acres. The Montville Golf Club leased some of the land and was officially opened in June 1932 with 20 members.

John Hargreaves purchased 3.5 acres of the original “Mayfield” property in 1982 and built 10 motel style units and then converted the brick house to the ‘Montville Mountain Inn Restaurant’ (now the Bar and Grill) and later added another 16 units.

Development in the Main Street took off after the Montville Centenary in 1987.  Prior to that the Main Street was Just a few houses and a handful of shops – The Russell’s had cattle in the paddocks that is now Russell Family Park and they always got out through the fences and wandered the Main Street. 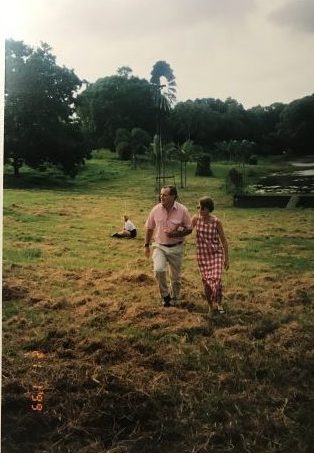 The general store had a petrol bowser, post office and real estate office all in the one building.  It was the hub of the village with drinks on the deck on Friday nights.

The Montville Pottery building was on the eastern side of town in the dip. 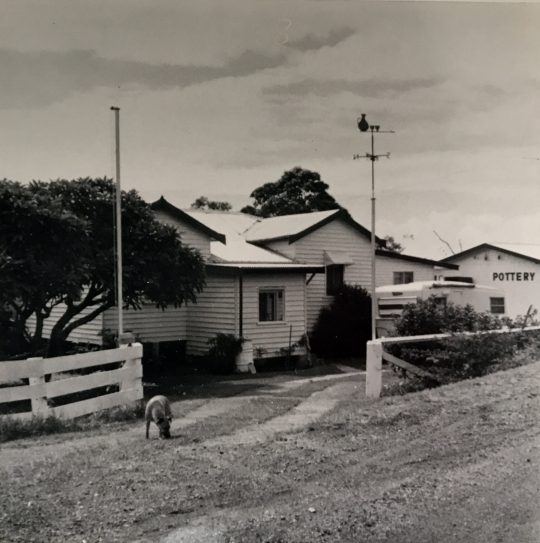 The Pottery on the eastern side of Main Street 1967

‘Connemarra Cottage’ was built in 1984 by Montville residents, Joe and Sue Delaney, who then set up The Irish and Scottish Shop in the building. 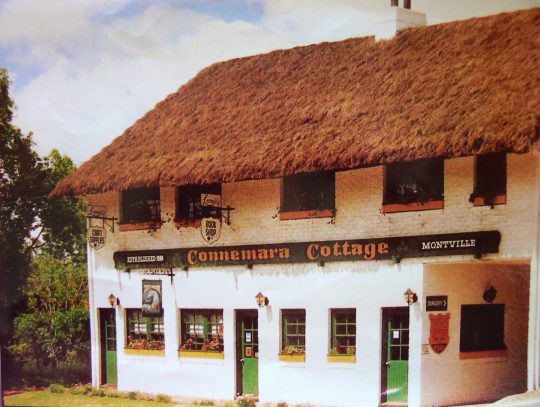 One interesting building ‘The Dome’ was built in 1972 by Roy and Rosalind Hayes. 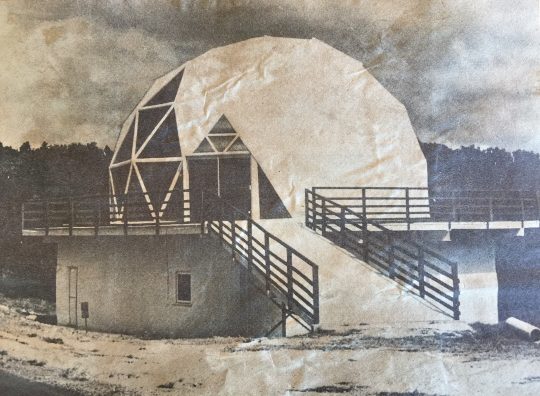 The geodesic design by the famous American architect Buckminster-Fuller was one of the first constructed in Australia.  Originally, inset in the ceiling were rainbow coloured windows that threw colours on the floor and walls. The base was used as a silkscreen printing workshop and the dome was filled with colourful handcrafts made by local residents. Delicious Devonshire teas and wonderful coastal views from the deck surrounding the dome were a great drawcard.

From 1986 the Dome housed Gallery D and Pantano Glass with directors, John and Beryl Davies. The gallery featured works of Queensland and Australian artists. There were also displays of jewellery, pottery, glass, woods and marquetry. Later the Dome housed a model railway.  It was a “must see” attraction for Montville in the early 1990’s. Sadly, the structure is now very forlorn and awaiting demolition. 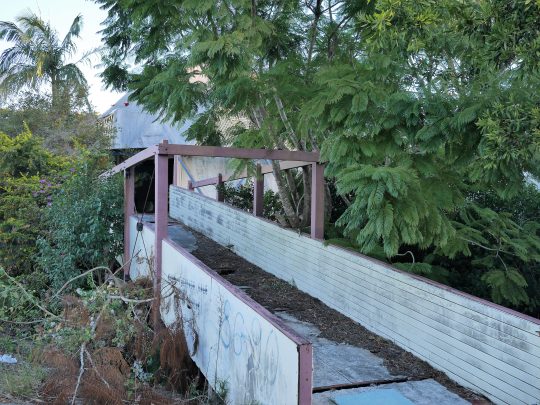 Then in the late 1980’s and early 1990’s the Main Street really evolved into what you see today with more buildings, and a new look streetscape was planned in 1997 and continues to evolve today.