A Point in Time 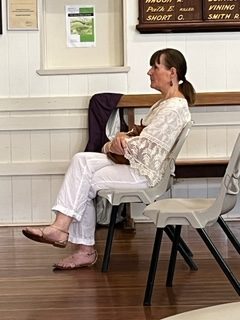 Fiona studied Anthropology and Archaeology at the Australian National University at the time when ‘Mungo Man’ and Mungo Woman’ had recently been found. She was fortunate to be involved in several archaeological field work expeditions to Mungo and the south coast of New South Wales.

The material she is presenting today looks at some of the most important archaeological finds in Australia.

Fiona is not an Indigenous person and does not claim to speak for any Indigenous group. She tells me her hope is that a better understanding of the importance of Indigenous history in Australia will lead us to better respect and value Indigenous Australians.

She is a member of the Sunshine Coast Reconciliation Group and hopes this material is received in the spirit of reconciliation.

Australia’s deepest history begins in the Pleistocene period between 100000 to 10000 years ago. It was an ice age with extensive ice sheets covering most of the northern part of the world. At this time there was a southern land mass including New Guinea, Australia and other islands. A body of water, Lake Carpentaria lay between them, bigger than present day England. This greater Australian land mass was one third bigger than present day Australia.

It had unique indigenous plants and animals. Settlement here came early in world terms -people lived in Indonesia 70000 years ago and there is strong evidence that people settled in Australia 50000 years ago, maybe even 65000 years ago, although evidence for this is inconclusive.

Even with island hopping and ‘glacial maximum’ where the ice sheets reached their greatest total mass, there was still 100 km of water separating Indonesia from Australia. People who left Indonesia, set off to the unknown beyond the horizon. Hundreds of men and women settled in Australia in a deliberate migration and this is the earliest evidence of open water migration. These people had substantial water craft and over a 2000 – 3000-year period the population spread around the Australia coastline and then then up river systems.

The populations became stable then stayed contained around that country. Hence there are more than 500 different language groups. Although these people were somewhat separate, they shared trade routes. At this time mega fauna shared Greater Australia with these people. There were three-metre-tall kangaroos, goannas the size of komodo dragons and there were wombats the size of rhinoceros. People also inhabited Tasmania; they were the southernmost human population in the world living alongside a glacier; so, it was extremely cold. These people would grind seed, haft stone axes, conduct burial ceremonies. For thousands of years they walked lightly on the land, maintaining its natural features.

But then a catastrophic event between 12000 and 10000 years ago meant that much of the coastal land was inundated as the water level rose flooding between Papua and New Guinea and Australia. These people survived that – they developed the most complex kinship system in the world, developed a philosophical and religious system and remained present and active through extremes of climate. Charlie Perkins said that we could all inherit this line of culture – the longest continuous culture until January 26th, 1788.