First, a little history leading up to the establishment of the Soldier’s Memorial Hall in Montville:

During World War One (WWI), delegates from Queensland, South Australia, Tasmania and Victoria, recognised the need for a veteran’s organisation. In 1916, they formed the Returned Sailors’ and Soldier’s Imperial League of Australia (RSSILA). The following year, New South Wales joined and Western Australia became members in 1918 and the Australian Capital Territory in 1927.

The League set out a number of objectives including the promotion of close ties and friendship among its members; to provide for the sick and wounded and their dependants and to preserve the memory of those who served and those who died in conflict. Their constitution included a number of political policies which would later lead to controversy and involvement in right-wing activities.

In 1940, the League’s name changed to include airmen when it became, Returned Sailors’, Soldiers’ and Airmen’s Imperial League of Australia, (RSSAILA).  Right-wing activities prevailed and Fred Paterson, a veteran of WW1 and a politician, was expelled because he had communist leanings. After World War Two (WWII), the League lobbied the then Minister for Immigration to stem the flow of Jewish immigrants fleeing post-war violence.

The vast majority of their members did not concern themselves with these nefarious activities, preferring instead to uphold the League’s more noble ideals. With these in mind, the Montville and Flaxton WWI veterans set out with earnest intent to provide a meeting place for veterans. This was to be tangible evidence of their support for serving members of the armed forces during this time when Australia was under threat of an attack by hostile Japanese forces to our north.

The Montville and Flaxton veterans, under the auspices of the Montville Sub-branch of the RSSAILA, and after much discussion, formulated a plan to build a Soldier’s Memorial Hall. They began the process by applying for a grant of Crown land. They cited the need to provide support for WWII servicemen when they returned home as the need for the proposed building. Suitable land situated on the Montville Village Green was gazetted in 1941.

For the communities of both Montville and Flaxton, 1941 would prove to be a busy year. In April, the Maroochy Shire Council issued a building permit and the Lands Department surveyed the building site.

As part of what proved to be a tremendous community effort, trees on private land were felled, dressed and donated to the project. These were taken to the Flaxton sawmill to be cut into sawn timber. The steam driven Flaxton mill was owned by Hamilton Sawmills and operated five days a week during normal working hours. Volunteers, including three ex WW1 servicemen, Roy Copeland, Frank Hetherington and Ray Plowman, gave up their weekends to fire up the boiler, get the mill running and process the logs into sawn timber.

Frank Hetherington manned the breaking-down or frame saw which cut the logs into flitches of manageable size. These went on to the benchmen, Roy Copeland and Ray Plowman who cut them into the various sizes needed for the project. The sawn timber was loaded on to a timber truck and transported to Montville.

In the meantime, stumps on which the building would be erected were obtained from Mr. F. Phillips’ property who donated them to the project. Those who attended a working bee in June dug the holes, cut the stumps to size and erected them ready for building to begin. By the end of the month, construction was ready to proceed under the control of R.H. Church.

Trustees, Roy Copeland, Trevor Carter and Ray Plowman were appointed and an overdraft of £150, was advanced by the ES&A Bank in Palmwoods.

By October, the building, though not fully completed, housed a meeting of the Patriotic Committee, the first of many to be staged there over the coming years.

By January, 1942, the building had been wired and connected to the reticulated electricity supply. The same month, the club Patron, H. Smith, officiated at the opening ceremony. By August the building had been given a coat of paint and Norm Isaacs appointed as the caretaker, a position he gladly and competently filled for the next eighteen years. The hall served as the home for the Montville Sub-Branch of the RSL and was made available for use by other organisations, including the Patriotic Committee.

Construction of the Soldier’s Memorial Hall during the dark days of WWII was something of a triumph for the Montville and Flaxton communities. During these times of food, clothing and petrol rationing and a general shortage of materials, people from all walks of life rallied around to help. The completion of that little building stands as an example of what can be achieved when a community facing adversity works together. To many it represents a spirit of optimism, of hope for the future and a tribute to the men and women who served their communities in various ways during wartime. All this was made possible with the wonderful support of those many women who worked tirelessly behind the scenes.

Red Cross ladies never failed in their support, often staying up late into the night to knit a jumper or a balaclava or to sew up a pair of pyjamas, little items of comfort for the serving troops to remind them of home.

Whether members of an organisation or not, Montville and Flaxton ladies did all they could to support both serving personnel and the building of the Soldier’s Memorial Hall. Their contribution should never be forgotten.

Post WWII, a number of improvements and alterations were undertaken at the Memorial Hall. Probably the most significant of these was the lining of the back-room with timber donated by Clive Blair. This was sourced from the old Kanaka barracks which had been built on J.C.Dixon’s Flaxton property in about 1910. 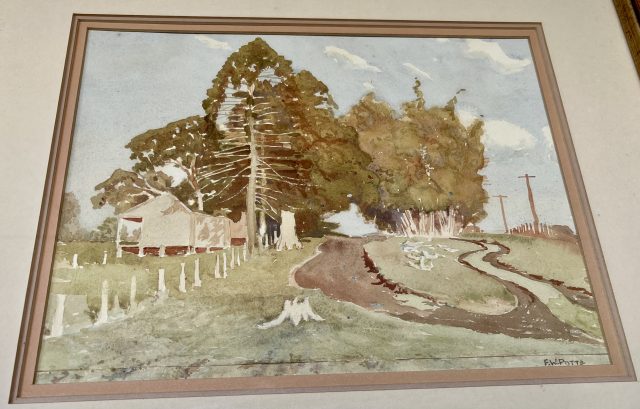 Clive Blair took over as caretaker in 1966 and continued in that position until 1974.

In1965 the League’s name changed to the Returned Services League of Australia, (RSL). 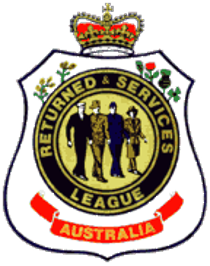 The Montville League’s Sub-Branch closed in 1974 and the South East Branch of the RSL took over management of the hall. They decided it would be in their best interests to hand over the hall to some other organisation who would maintain it and put it to good use.

At a public meeting in Montville in 1977, it was decided to call applications for control of the hall. The only interested party, St. Mary’s Church of England, were granted control of the building on the understanding that it would be held in trust as a church and community hall. They have administered and maintained it ever since. Among the trustees appointed for St. Marys Church and Community Hall was Marjory Copeland, wife of one of the original Trustees, Roy Copeland who had died in 1969.

The Soldier’s Memorial Hall, renamed as, St. Mary’s Church and Community Hall, still stands proud on the Montville Village Green. It remains as a memorial to those whose lives were interrupted or cut short by war. It remains also as a tribute to the men and women who built it all those years ago and who have maintained it ever since. The communities of Montville and Flaxton can rejoice in the knowledge that the many hands that made this icon possible did so with honour and respect and hope for the future for both veterans of war and the communities who made this edifice possible. 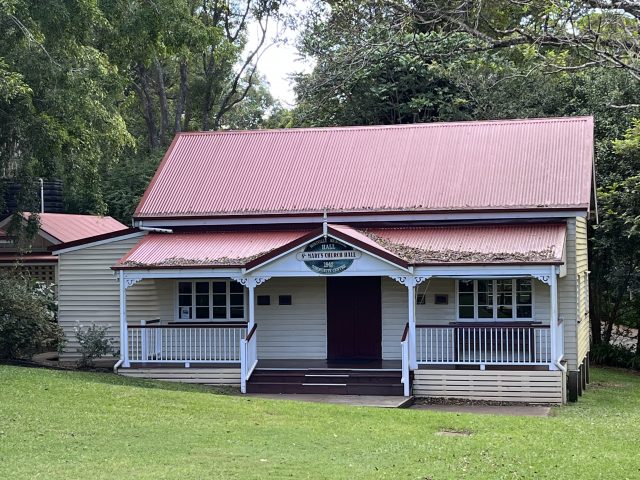