Cricket at the Sports Ground

Doug Patterson asked Terry Glover what he remembered about cricket at the sports ground. Here is what he wrote in 2019. 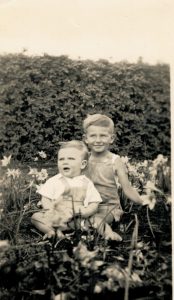 Peter and Terry Glover in the garden, 1952

I did not play cricket but took interest in the activities. Bruce (Moll – next door neighbour) was a good cricket player and was involved in Queensland Country events. Actually Bruce was good at a lot of sports including tennis, rugby and cricket. He also won the cross country race when he went to Nambour High School.

The main thing I remember about Montville cricket was cleaning up cow manure on a Saturday morning. The property on the south eastern side of the sports ground was owned by Mr and Mrs West-Newman. They had a dairy farm and there must have been some arrangement for cows to feed on the sports ground. I went over and helped out with the clean up so that the oval was ready for play on the Saturday afternoon.

The pitch was concrete and mats were put down to provide a playing surface. The oval was not what you could regard as flat and was a bit uneven. Teams came from other towns to compete against Montville. I don’t remember what Grade cricket was played but maybe C Grade. I was just a spectator but I do remember being asked to field now and then, when numbers were short. By some miracle I managed to take a catch on one occasion. My only other involvement was searching for balls that got hit for six.

Tennis at the Sports Ground

My playing involvement with tennis was as a school kid. We played against teams from other towns and I remember going to places like Palmwoods, Buderim and Mooloolaba. One week we played away and next week it was at home. The home team provided the afternoon tea.

The main competition at the courts was for the adults and I remember some good Montville players like Joan Brown, Bo Brown, Dawne and Tony Barnett. Competition was on Saturday and Sunday was a social day.

The courts were maintained by the local players and Bo and Tony would turn up on Saturday morning to prepare the courts by rolling and marking. There were three courts. Two were sand based and the other was a type of bitumen compound. 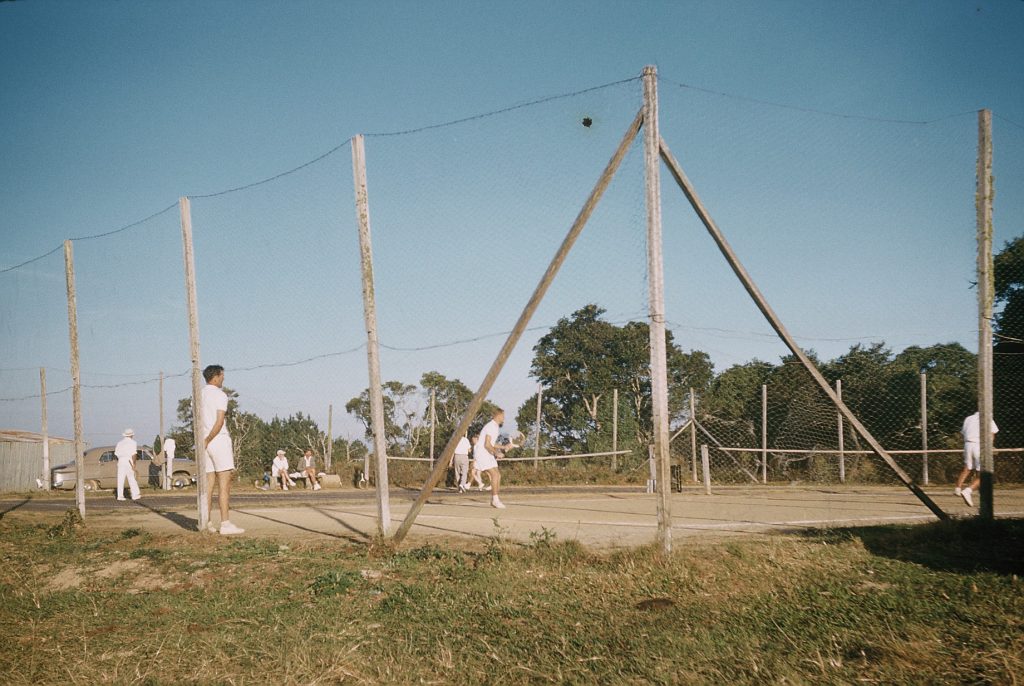 Tennis at the Sportsground, June, 1960

There was a little club building that I think is still there today. Afternoon tea was a part of the afternoon and I remember that they had a large drum that was hung over an open fire to boil the water. Once the water was heated they threw in the tea.

One of the interesting aspects was the lack of toilet facilities. There was an old out-house between the courts and the cricket shed but it seemed to be for the ladies. The guys had to sneak off into the scrub on the southern side of the courts if nature called. Fortunately a toilet block was built in later years.

The courts were neglected for a while as the members got older. Fortunately there was some renewed interest.

I was very fortunate to grow up in Montville and live in a farming community where there was lots of space to play and explore. Mill Hill road was a dirt track in my early childhood as was the road from Montville to the turn off on the Maleny/ Landsborough Road. When I first started school the main street was dirt.

There was a group of parents in and near Mill Hill Road who took turns to drive us kids to school but we had to walk home unless the weather was really bad. We had lots of fun walking home except when a car drove past in dry weather and it took quite a while for the dust to settle so we could see the road again.

A big part of Mill Hill Road before my time was the old mill right at the end of the road. As a child I remember seeing the old remnants of the mill. The old boiler containers and remaining parts of the building were eventually pushed over the southern escarpment and I am sure something would still be there today.

Mill Hill Road was part of the Montville farming community. Families got along well and helped each other if needed. Farmers had to deal with drought, too much rain, hail storms, low produce prices and bush fires. But we all survived.

Tom and Dulcie Brown operated a farming business. Tom had a horse called Nugget. The horse used to pull the cart around the farm and Tom would put his produce in this cart and bring it to the packing shed. The cart had no wheels and was somewhat like a sleigh. Dulcie was a hard working woman but on Sunday she was always at Church where she was the organist and also in charge of Sunday School. Tom and Dulcie eventually retired and that property has been owned by the Jackson’s and then the Pappas’.

There were not many tractors in Mill Hill Road in my early days and farmers used to hire contractors to do hoeing and ploughing.

The Williams Brothers moved to Montville during the 50’s and established a large pineapple farm on the corner of Mill Hill Road and Balmoral Road. My father converted his citrus orchid at the western end of Mill Hill Road to pineapples. My brother, Peter grew pineapples on the family property opposite the plantation owned by Don and Evan Williams. 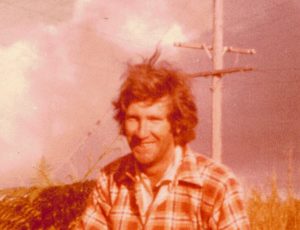 Macadamia farms were also scattered along Mill Hill Road. Godfrey McCullough bought his property opposite Macadamery Montville from Mr and Mrs Thompson and established a fine plantation of macadamia nuts.

After the 60’s some of the farmers grew avocados and the large pineapple farm owned by Don and Evan Williams was sold to Mr Strong and subsequently subdivided. This and other development has allowed a lot more people to be able to appreciate the benefits of living in Montville.

There were other interesting people who lived in Mill Hill Road. The Australian historical novelist, Eleanor Dark and her husband Eric once owned what is now called The Macadamery Montville. For a numbers of years they would come north each winter from their home in The Blue Mountains. Her book titled The Timeless Land written in the early 40’s was made into an ABC television series in 1979. Novels written in 1934 and 1936 both won Australian Literature Society Gold Medals. Her last novel published in 1959 was called Lantana Lane. That novel was of interest to people in Mill Hill Road and the wider community because the story line was based on the people who lived in Mill Hill Road.

Eric and Eleanor Dark were also friendly with another couple from the Blue Mountains named Eric and Margaret Lowe. Eric Lowe was also a novelist and had some books published. The Lowe’s owned property opposite the Sports Ground in Balmoral Road.

Another interesting property in Mill Hill Road is known as the Smithy. I remember as a child this property was owned by Mr and Mrs Wiles but the little shed adjacent to The Macadamery subsequently became the site of the Smithy.

Mill Hill Road was home to characters in the 50’s. None more so that the man who worked for my father. His name was Martin Winner. He was part of my life for many years and very kind to me. Although he had a pocket watch, he seemed to base knock off time on the aeroplane that flew over around 5 pm each afternoon. Locals would see him walking to Montville on Sunday morning to get his supplies. He lived in the old shack on our property. Eventually he left and went back to Sydney.

Living in Mill Hill Road allowed me to be close to nature. There was always some fascinating creature to catch my eye. It might have been a black snake, a koala bear, native birds, a goanna or a bush turkey. Perhaps my favourite was a one eyed kookaburra known to the locals as Nelson.

Life is different now and farms have mainly made way for lifestyle living. The once dirt road is now sealed and putting chains on the wheels to get through the mud is a distant memory.