Des arrived in Montville in 1953 as a 14-year-old with his parents who had bought a pineapple farm on the southern side of Western Avenue. Some four years later, they rented another farm just down the road on the northern side which Des and Bev later bought. Once settled, Des got work chipping pines (pineapples), earning £1 ($2) for an 8-hour day, which he handed to his mother to help with housekeeping. He can remember joining the Junior Farmers and going with his Dad to Fruit Growers Meetings, but his most vivid memory of those early times was riding his bike with his Dad in the dark down to the Memorial Gates for the Montville ANZAC Day Dawn Service. He also enjoyed playing cricket and tennis at the Montville sports ground.

Bev Duhf’s family had a mixed farm and a timber mill at Kiamba, west of Yandina. Bev helped out on the farm, milking 30 cows by hand and sometimes using the docking saw to help her father and brother cut boards for pineapple cases. Bev was working at Coles when she caught the eye of Des’s younger brother, Trevor, who asked her out. She was allowed to go only if her younger sister, Margie, went too, and since Des was the only one with a car, he had to be chauffeur. The foursome went to the Alex Surf Lifesaving Club for a dance, Des recovering from a broken foot just out of plaster. That first date had an unexpected outcome. The younger brother and sister shared the back seat on the way home and Des and Bev had the front seat to themselves. This became Bev’s permanent seat and Des says that that was the best thing his brother ever did for him. Bev remembers that Des wooed her not with flowers but with baskets of big sweet strawberries which made the other girls extremely jealous; but the courtship was longer than they wanted because Bev’s Dad needed her on the farm.

Then Des’s parents moved to Sandgate as his Mum was not in good health and Des batched for 18 months on the rented northern farm. Finally, in 1964, Bev’s Dad agreed to their marriage. The first thing Des and Bev did was to get a bank loan to buy the farm. Des worked out that Bev was actually making more money at Coles than he was bringing in from the farm so he went to work with his uncle, Henry Richings, who built farm sheds, cow bales and pig sties out of concrete blocks. 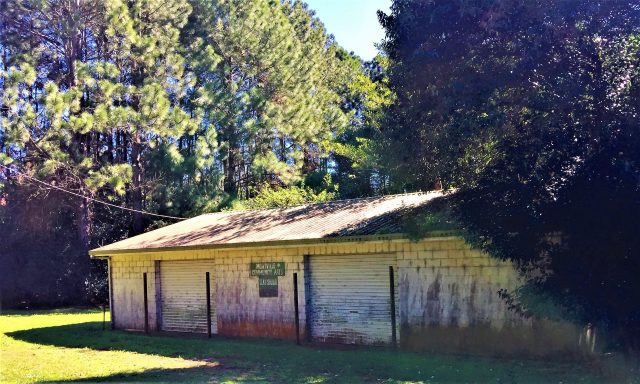 After five years, Des left Henry and went to work with a Buderim builder, Peter Bevis, and later with Jack Sneddon, Jeff Wright and others where he learnt a range of new skills in the industry, including tiling. With the idea of having a family on hold, Bev continued to work at Coles where she was promoted to Head Girl, and Des partnered with Arthur Walker to work as a builder from Monday to Friday, farming over the weekend, and tiling for other builders at night – often for another eight hours. (He says, a bit ruefully, that some weeks he made more tiling than building and farming combined.) From the 70s to the 90s, Des and Arthur built houses across the Sunshine Coast hinterland, including Montville homes for Mrs. Sydell, Tommy Neve, Peter Glover, Lyndon Dewitt, and Mr Taylor. He also carried out a number of home renovations and helped re-build several places infested with white ants including the School of Arts Hall and St. Mary’s Anglican Church. He remembers that, before they worked on the church, they had to remove three large gums. They quoted £400 which they thought was fair only to learn later that there was an earlier quote of £600. They could have done with a bit of extra money. It took Des and Bev eight hard years but eventually they bought the farm and started their family; Michelle and Michael.

Both Des and Bev shared the values of living in a small community. Through his work, Des had come to know Jim Hooper, who had established the Montville Rural Fire brigade. Jim had set up two – gallon drums with pump and hoses on a carryall on the back of his tractor. Jim asked Des to take on the role of First Officer of the brigade and he accepted and held that position for 10 years. During this time, Bev became the unofficial telephonist for the brigade as all calls came to their home. Des and neighbour, Len Gorsch, outfitted their 4×4 tractors with 500 litre spray units with hoses for fire-fighting and control burns and these were Montville’s first fire engines. Des oversaw the acquisition of Montville’s first official fire truck in 1986 and soon after a trailer with a 500 litre tank of back-up water. 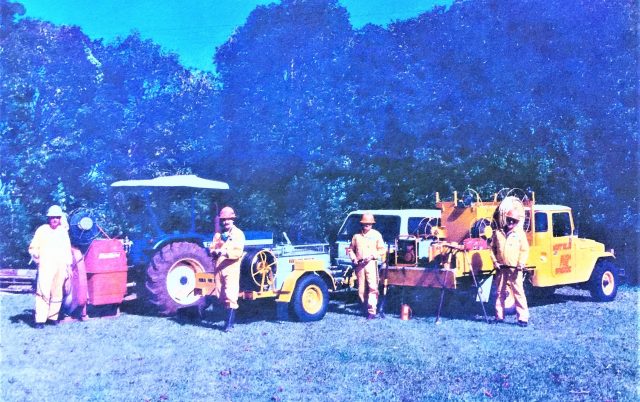 In the early 1970s, Des joined the new hall committee when it was discovered that the old School of Arts Hall needed a lot of work. It had white ants, needed re-stumping and had developed a precarious lean. Jim Hooper donated the steel for the stumps and Des made up the posts with plates top and bottom after work. Then Jim and Des, with community help,  made steel rods and mounted them below the ceiling to pull the sagging eastern wall in and hold it in place. They got rid of the white ants which had progressed into the ceiling and Bev swept it and then hauled the vacuum cleaner up for good measure. Then they painted the interior at night under lights. Concrete steps were added to the porch entrance and Des buried a penny, wrapped in plastic, under one as a mini-time capsule. (He is pretty sure it wasn’t a 1930 penny.) This voluntary work kept this invaluable community asset viable for another 50 years.

Des was involved in another community project with Jim. They made the bell tower for St. Mary’s Church of England Church in Jim’s foundry, loaded it on to Des’s tip truck, and installed it on site by raising the back and sliding it into place. Jack Warren built the flagpole for Village Green and Des helped him stand it. Although Des was more of a hands-on man than a committee person, he did become a trustee for the sports ground and was active in improving its facilities in the 80s and 90s. 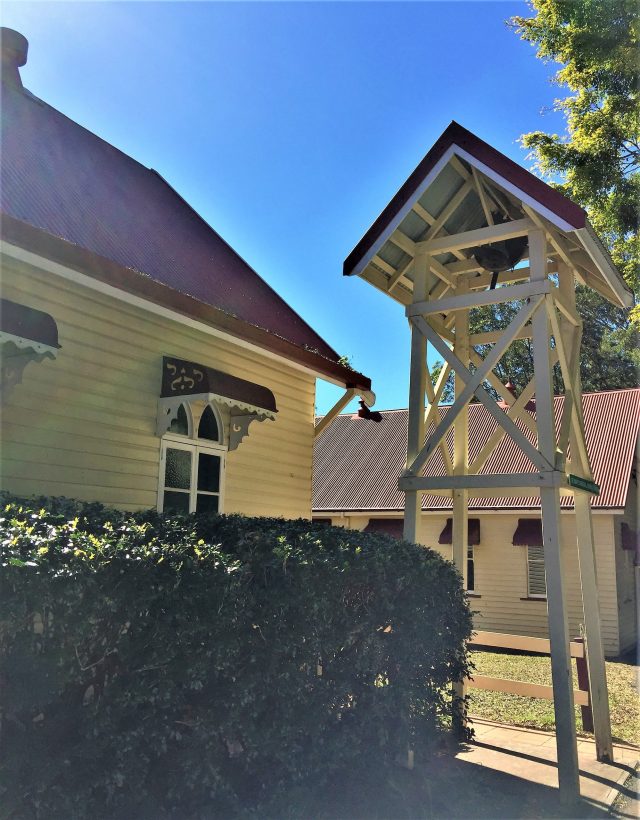 Bev and Des also played an active role in setting up for the Easter Dawn Service in Carpenter Place and the Carols by Candlelight Service in the Village Green where  Des’s flatback truck was a useful stage. Bev enjoyed music, dancing and singing and was a member of the Montville Choir. She is particularly proud of her involvement in re-introducing Montville’s ANZAC Day Dawn Service after it had lapsed in the late 1970s and in organising a number of concerts and dances at Montville, Eudlo, Landsborough and Palmwoods to raise money for extensions to the hall. The dances, with music provided by the Crow’s Nest dance band, The Silver Tones, were particularly successful. All up, Bev raised $11,500 for the hall work. 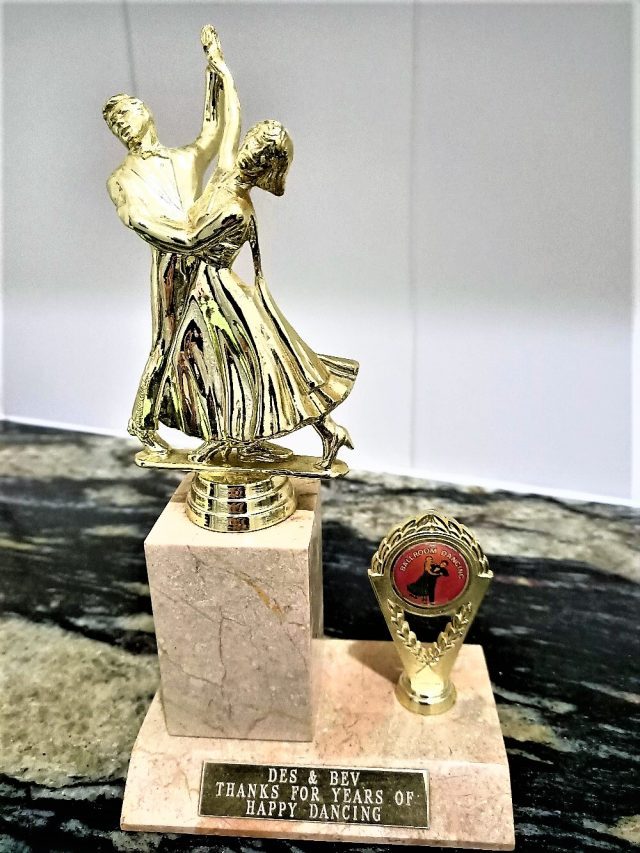 With an increasing number of sub-divisions happening along Western Avenue, there was a shift in population from a predominantly rural community to more of a suburban one. They had gradually shifted from pines to avocados and had shipped the last commercial load of pines (13 bins in two trucks) with Bob Bagley. Avocados, however, were susceptible to red shoulder beetles and required spraying. The best time to spray was at night – less wind meant minimal overspray and bees were protected. However, night spraying meant tractor noise and lights. While this sort of activity was quite an everyday occurrence in a rural, farming community it was less acceptable in the suburban community developing along Western Avenue. Neighbourhood protests led to a community ban on night spraying. With the farm still too small to be economical, Des and Bev decided to move to a larger farm in the rural farming community of Blackbutt. MVA President Ian Russell acknowledged the 14 years of service Bev had given to the Montville Community in the President’s Report to the 1997 AGM of the Montville Village Association and The Montville Gazette ran a front-page story highlighting her “outstanding dedication”. In 1999, Des and Bev were jointly presented with Montville’s Citizen of the Year Award for their service to the community over four decades. Montville had lost two of its most active and generous citizens. 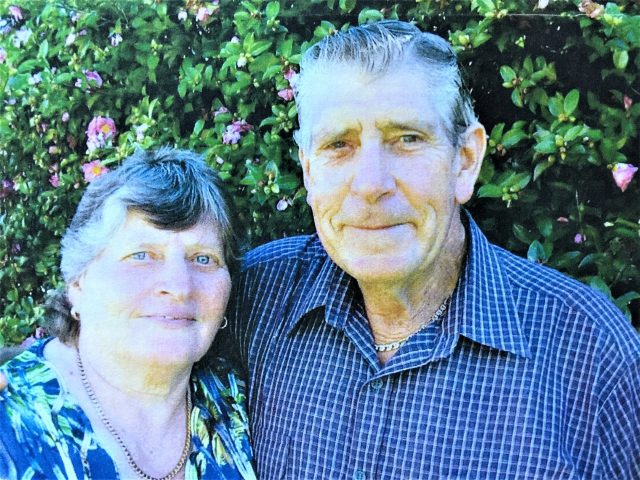