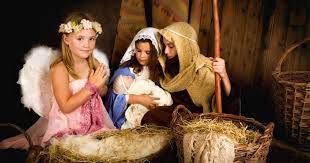 by Kyleigh Simpson            It always starts out with the best of intentions. The ‘Montville Kids Club’ Christmas break up party is planned for weeks, if not months ahead, and afterall it follows a similar plan to previous years, so how hard could it be?

The nativity play is rehearsed. The notes have gone home to parents about costumes.

The Bush fire brigade is lined up to do the barbeque sausages and a handful of venerable Maleny Uniting Church volunteers are coming over to help prepare the food. Like many local events, Australia Day, Anzac Day etc. it’s ‘all hands on deck’.

The Village Hall has been booked and the jumping castle will inflate at 2.30 just in time for the children to arrive.

The Christmas craft activities are arranged, and all manner of unlikely materials gathered to make useful crafty Christmas things to take home. A retired Minister who happens to be one of the grandparents is coming down from Hervey Bay bringing his dog who is a bit of a star to do some tricks, and then to give a message (the Minister that is, not the dog!)

So, this sounds pretty organised, and we troupe up to the Hall to get it set up early only to find that the hall has been booked for ‘important Council strategic planning deliberations.’ I peer in through the door at this secret meeting and see a man equipped with impressive lanyard and extravagant telecommunications reading from his power point to a handful of deeply engrossed locals. They seem stuck on some point and enter passionate discussion while we wait, sweating on them to hurry up and finish.

Oh great! We are relegated to the side of the hall and start setting up tables from the debris and unswept chaos left behind by someone else. We are going to run out of time.

Suddenly the jumping castle is up and the children are running across the old footbridge from school. Right in the middle of the large old hall the handful of locals and the Council team are still engrossed in their discussion, so we need to drive them out by making lots of noise.  Thanks kids!  Crash! Bang! Yippee! Thankfully the Jumping Castle pump has a hole in the Muffler!

They’re out with the bum’s rush!

Several forlorn children come up to tell us they have left their costumes behind, and we placate them with news of pizza for afternoon tea, a treasure hunt and secretly hope their parents will remember to bring something up. Older children offer to do face painting on younger ones! Off you go, do your worst!

Children are already jumping in the castle and there are shoes scattered everywhere and I can already hear the parents asking about lost shoes as if we have been able to keep track of 35 + single shoes and discarded socks. Hello!

Some parents start to arrive, and they have other children in tow as this is a family break up party and we always welcome adults of child rearing age to add to the octogenarian leaders of Kids’ Club. Some parents reluctantly join the craft table with their kids and struggle with staplers and tying bows. Ha! Welcome to our world. Mostly the parents are far busier chatting amongst themselves. Everyone seems more than happy to be here which is nice. A couple of the older leaders sit slumped in a cool corner and maintain an oblivious stillness while all around them is chaos, like a scene from a Pieter Bruegel painting. Montville children’s events always take on that sort of wild appearance where a hundred vignettes are taking place simultaneously but unlike the Flemish artist there aren’t any horrid things going on and it is all good fun. Very little blood shed so far.

The minister, his wife and his dog have arrived, and they want to do their act in the hall. So, we move all the already arranged tables and chairs so we can bring in the children to sit in a circle on the floor. Hells Bells! Anything for peace.

An assortment of props like trolleys, hoops and toys are required and the quietly spoken old guy begins the show. In comes “Scruffy” or was it “Scrumpy”? I couldn’t quite catch it. Not the svelte dog I was expecting but a rotund short black and white hairy Labrador x Collie waddled in. (He gets a lot of treats and must practise a lot!)

In any case he was a very smart dog, and everyone enjoyed the performance, and then it was time to do a noisy rehearsal of the nativity play before all the parents arrived.

Shepherds, angels, wise men, inn keeper, Mary and Joseph and the star went through their undressed rehearsal in quick time as the Jumping Castle was beckoning just outside the door.

Michael and his 200 watt P.A. system have been roped in to provide enough volume to give some announcements over the din and to help the Christmas play narrator be heard when the curtain goes across. With resigned looks the leaders could do nothing but pray and cross their fingers that it would all be alright on the afternoon. Break a leg!

The Christmas craft, face painting and games were in full swing and weary parents were arriving after work. The November sun was still high, but it was time for the children to disappear out to the back of the hall to get into their costumes for the play. They poured over the front of the stage and under the curtain, up the stairs on either side and appeared to be like a noisy stream of energy in a scatter of discarded plastic bags, bits of craft, tinsel, fake beards and yet more socks.

After asking parents to make their way to the tables and chairs and sit down in anticipation, the “feedback” whistle from the PA dies down again. The big, old, wooden Hall thundered with voices, crashing chairs and running feet.  I joined the leaders who were helping out the back only to be met with the usual piles of sheets, old curtains, strewn fake beards and checked tea towels. Some children obviously had delivered the note because they had lovely angel dresses, with wings and halos or dressing gowns and shepherdy outfits. The star was a cardboard cut out with a hole for the face and the three wise men had gold gifts from Crazy Clarks to carry.

We mustered everyone into position.

The angels were in the scruffy old lunch room, the inn keeper, Mary and Joseph all wriggled and jumped up and down in position. The narrator fiddled with the microphone and dropped it. BANG!

An army of shepherds with their trusty cut-outs of sheep and a donkey (who can only be walked one way because the other side of the cardboard donkey says ‘Kellogs Cornflakes”) were poised ready for the starter’s gun.

I check on the angels when the star looks up at me and says,” I’ve got to be at the other door.” I race around with her, and we wait at the front door of the Hall.

I am running through the play in my head when I realise someone’s missing, three in fact. I turn around expecting them to be behind me. But no, it is not the three wise men, but three older men at the door, a couple of off duty Church Ministers and a Rural fire brigade bloke in fire blackened orange overalls. I say, “I’ve lost the three wise men. If they don’t turn up, it’s you. Get ready!” They look around for the three wise men.

The parents are entranced as they watch the play and mobile phone cameras are snapping away. All the children are on the stage and take a bow and excitedly run off while shedding costumes to a great applause. This is what it is all about.

Just when you think it’s all over the old Reverend takes the stage for a Christian message. Short and sweet would be best, but no. Oh no!

We stand patiently, politely, and I look out on the blank parent’s faces and their stunned mullet, sweaty children and know we’re losing them. If only we’d held back the performing dog for the parents and used the old reverend and his message on the children. There’s only one thing can save the situation…….it’s sausages!

“Right, we’re serving up. Let’s get the food out there now!” I say. “The Rural Fire Brigade blokes have already brought in the blackened sausages (including the vegetarian ones now hopelessly mixed up with the 40% genuine meat ones) and the onions, so we are set.” I point out with a rising pitch in voice and hands waving urgently. There’s a Hall full of people at tables out there.

It suddenly dawns on me that oldies from Maleny while great at slowly shredding lettuce and quietly chopping up tomatoes are stumped by the scale of the serving task ahead. Two ladies stand behind the bowls and I demand of them accusingly, “What’s the system?” Silly me, imagining there would be a system! You know 100 meals, 20 plates set out at a time sort of thing. But no. Single plates were handed down, one at a time, geologically slowly, and there would be few “Master Chef” points for arrangement on the plate. Parents and children looked greatly relieved to focus on the food while the Reverend droned on. Inside my head I am spraying personal invective and waving my fist, “Gordon Ramsay” style. Outside I appear serene. I am serene.

Finally, the message was over, and it was time for our local Rev to put in his two cents worth. Luckily, he kept it down to a short message, a couple of thank yous and the evening wound down naturally with people chatting over coffee and dessert, while children ran wildly in the hot dusk outside the hall.

We started to clear up the tables and I wandered out to the back stage area to be confronted with a tangle of discarded sheets and cast-off beards, a crumpled star, angel wings and piles of sheep ready to be packed up for next Christmas in Montville.