Rob Muirhead recalls growing up on his Dad’s Farm

I received a rifle for my 12th birthday with the instructions from Dad that “anything I shot must be a pest or suitable for eating.”  I roamed the scrubs using old logging tracks, visiting the Obi to fish and getting to know the many tracks that existed through the scrub from the back of Hiftons to the Obi and the scrubs below Kondalilla Falls to the junction of the creek with the Obi.

I have drawn up two maps of the Montville roads system which I have entitled Early Days and Later Days.  The early sketch does not show the new road to Palmwoods or the access road to the bowling club. 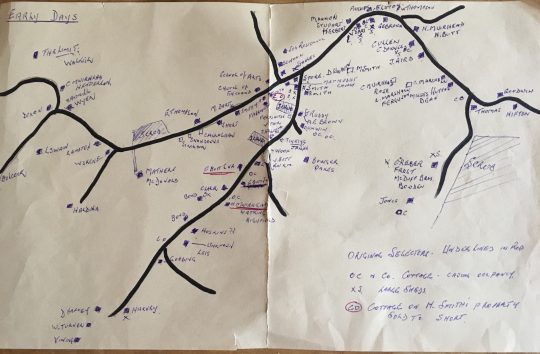 The houses have been named as memory dictates location and ownership.  Where two or more names appear, the first is the original owner followed by subsequent owners.  Some names appear in both sketches, while some appear in several locations.  This is due to the selling and purchasing of properties, eg. C. Muirhead appears on the early sketch at Flaxton, selling to Henderson and at Montville selling to Rose.

My earliest memories of Montville are of when we lived at Mill Hill at the end of the road.  On the left of the road was scrub and on the right was Grebers Farm.  There were at least two cottages on the site.  We occupied one, the Jones family lived in another, while I think there were one or two more.  These cottages apparently had been built for the employees of the sawmill that had operated there.  The mill was supplied with timber from Baroon Pocket and the surrounding area.  The logs were snigged to the foot of the hill and hauled up a wooden railway by a steam engine to the mill.

Dad bought a farm, a subdivision at the back of Mr Cullen’s farm.  This property had a very narrow access to the front road, now Balmoral Drive.  The property had a few acres of bananas and there was an area where the timber had been cleared but not stumped and no house.  The house was then built but lacked today’s conveniences.  Lighting consisted of kerosene lamps which required wick trimming, filling with kerosene and glass cleaning.  Cooking was done on a wood burning stove.  Wood had to be cut and kindling gathered for lighting the stove each morning.  Bread was home made – dough was mixed with yeast and set in a container, wrapped in a blanket and placed under the stove to set and to be made into loaves and baked next day.

The Laundry consisted of an open fireplace, constructed by assembling stones to support three iron bars that were held above a fire pit.  The containers were two or three kerosene tins, the rinsing dish was a kerosene tin cut diagonally.

The preparation for plantings must have been a tedious task.  I was too young to participate but I remember how it was done.  Dad would dig round the tree stump exposing the roots, then he would either cut the roots with an axe or he would collect wood and make a fire and burn the roots.  A wallaby jack was used to remove the roots and push the stump over.  Roots and stump were then burnt, the land was ploughed and pineapple suckers and citrus trees planted.  The pineapples provided an early income while the citrus trees were developing.  As the citrus trees grew, the pineapple plants were removed.  The development of World War 1 soldier settlements as pineapple plantations at Beerburrum provided a market for unwanted pineapple plants.  Thousands of bags of suckers were supplied from Montville.  Though only a child I remember helping bag the suckers.  Workmen used to break the suckers from the parent plant, trimming the plant by cutting back the leaves.  Large knives or a reaping hook were used for this task.  The plants were then packed into sack or chaff bags, 100 suckers to a sack, 150 to a chaff bag.  The bags were transported to Palmwoods and railed to Beerburrum.

At that time Blackall Range was a leading citrus producing area in Queensland.  A few years later major citrus supplies came from Gayndah. Dad sold this property and bought another farm on the back road, now Western Avenue. This new property was producing citrus and bananas.  There was a large area of scrub.  There was no house.  Dad built a new house – three bedrooms (Mum and Dad’s, the girls’ and mine).  There were still no modern conveniences but the house was built on high blocks enabling the laundry washing and rinsing to be done in tubs on benches under the house.  The clothes were boiled in a copper outside.

As the bananas were getting old, Dad decided to fell more scrub for bananas and replace the old area with pineapples.  About this time (1923) I left school and helped Dad, gaining valuable experience that assisted me in later life.  A lot of work was involved in preparing the land for bananas. Firstly, we brushed the scrub using a brush hook and cutting any vines at ground level to clear the undergrowth before starting to chop down the trees.  After cutting, the tree trunks were then stacked and burned three or four months after felling.

After this came the planting.  Our plan was to plant trees 8.5 feet apart.  A stake used as a sighter or a marker was placed at what was to be the end of the row.  A measuring stick was cut to a length of 8.5 feet and the first row of holes was dug.  The sighter was then moved to the second row.  The second and subsequent rows were measured toward the marker and away from the previous row.  One day was spent digging the holes. The next day was spent collecting banana suckers for planting.  After the fires, the weeds germinated, principally inkweed with scatterings of cape gooseberries and passionfruit plants. Both passionfruit and cape gooseberries provided an early income.

The harvesting of cape gooseberries was a tedious operation.  The day was spent collecting the gooseberries, the night was spent husking them and the berries were placed in cases ready for market.  When the crop was finished, the old plants were removed at the next chipping.

The old bananas were cleared, the land ploughed, and pineapples planted with strawberry plants inserted between the rows of pineapples.  These also provided an early income.

There were several ways of packing bananas – either in hands, in sets of four bananas or singly.   Bananas in cases were always sent to the southern markets, ie, Sydney and Melbourne.  For the Brisbane market, the bananas were either cased or sent loose in bunches.  When sent loose, the stem was marked with the grower’s initials and the number of dozens on the bunch recorded.

Palmwoods was the railhead for Montville.  Dad told me of the early days when the approach to the Range from Hunchy was on the crest of the ridge, arriving at the top at a spot near the school residence.  In the very early days, goods and chattels were carted to Hunchy, then taken up the Range on a pack horse or carried by hand.  Later a new track to remove the very steep pinches was cut into the side of the ridge below Razorback, while above Razorback the track was diverted to the top of the Range near the top of the present cutting.  Later again, the new road as it was referred to was developed.  This included the cutting at the top of the Range and a road from Razorback via the Devil’s Elbow, a very sharp corner, to Hunchy.  This road allowed horse wagons, carts and bullock teams access and was used until the new road was opened in 1928.

Dad told of riding to Palmwoods with punnets of strawberries balanced on the pummel of his saddle.  I can recall only one serious accident on the Range.  A wagon driven by Brian Watkins ran off the road near Razorback, capsized, the driver being seriously injured.