My years in Flaxton began in 1942! My father, Bill, and his Dad were farmers on Kingview. I have followed happenings in Flaxton since that time and I attended Flaxton School through all my primary years and sat Scholarship at the school. My memories of Flaxton School are that they were very good years, even if we had forms to sit at and desks to write on. I remember learning to write on slates and later in writing books. The desks even had ink wells for the ink pens we wrote with! 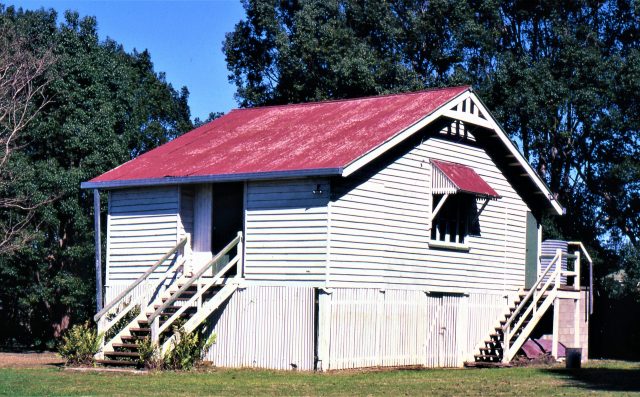 Flaxton State School after it closed as a school in 1968

In my time as a student, the grounds and school were well cared for. It was beholden to the community to mow and maintain the buildings and equipment, since it was owned by the district and many events were held there. That included the care and upkeep of the boys’ and girls’ toilets at the back of the school. These were the old Dunny types, No Sewerage there!

The school was the meeting place for Fruit Growers Association Meetings, CWA meetings (Marian Collins, the President), District Fun Events & Dances, School Christmas Break-ups (all children taking part). I do recall singing solo, “There’s an Old-fashioned House in an Old-fashioned Street” at one Christmas Concert. The tennis association gathered regularly at the school, maintaining the tennis courts, resurfacing, levelling and rolling both courts. Mrs. Joe Dixon held Sunday School on the school verandah during my years at the school. This happened every Sunday morning. I know because I was a regular attendee.

Saturday district events included, tennis, of course, nail driving, clock golf, cricket and games for the Children. Another school year exciting event was the Break-up Picnic at the beach, either Cotton Tree or Mooloolaba. Don Verrill, the local carrier for all in the district, supplied the truck into which all the kids bundled and sat on forms from the school. What a great time was had travelling to and from the beach and then enjoying all things beach.

A favourite place for most of us was the back fence along which grew a mighty hedge. The entrance was via a style across the fence to the Dixon’s property at the back of the school. This hedge had a walk way along the top. It was a great way to while away the dinner hour. We also played Brandy (now banned by some fools in Government) and Poison Hole under the school in the dirt; it’s a marbles game with the last (poison) hole in the locked tool room – just close enough to retrieve the marbles! The girls played their own games where they threw balls over the floor joists under the school.

Herb Bell was the teacher for all grades at the school. He lived with his wife, June, and their children in a smaller second house on The Limit – a property opposite the school.  I loved this man, who used the cane when necessary and rewards as well for excellent effort and behaviour. He was responsible for all activities other than sewing classes where Mrs. M. Collins was the teacher. We had craft each week and a few I remember were basket weaving with blady grass, book binding, using oils to pattern paper for wrapping etc. Every Wednesday afternoon all pupils took part in working the school gardens. I recall being rewarded for good workmanship by being let off early. During one gardening session one of the girls was teasing Joseph Rook! He was so angry he flung the garden fork away and chased this girl (who will remain anonymous). I found myself flat on the ground, speared by a tine of the fork! Needless to say, I pulled it out of my leg. The tine had penetrated my leg at the knee cap and travelled down the calf muscle! Ooh, I spent another 3 weeks in hospital being speared in the buttocks twice a day by the nurses. Some of us keen gardeners were found many dinner hours scratching in the soil by the second tennis court. We were rewarded with juicy white potatoes that grew in profusion in that area.

I think all pupils walked to school; the longest walk was for the Gallagher kids. I walked one mile to and from school. I passed many homes and one I visited regularly was Darcy Hetherington’s house. It was the main attraction, Darcy, and Mrs Hetherington (what a darl) feeding us afternoon tea, and then there was Enid, a heart throb as well as a great table tennis player. We had many enjoyable games. I passed the Cogill’s property, Ron was a higher grade than me. His dad, Doug, was the local grader driver upkeeping the roads. Ron went on to become a school inspector, then retired to a Newsagent’s business.

A few other memorable events include the older kissing couples at the School Christmas Concerts; climbing the gigantic Black Bean tree out the back of the school; picking blackberries, raspberries and peaches in season on the way home from school; duster duty by the senior grade students; and hanging on the back wall – 4 foot-long mounted crocodile. I always wonder where it went when the School was so unceremoniously torn down! 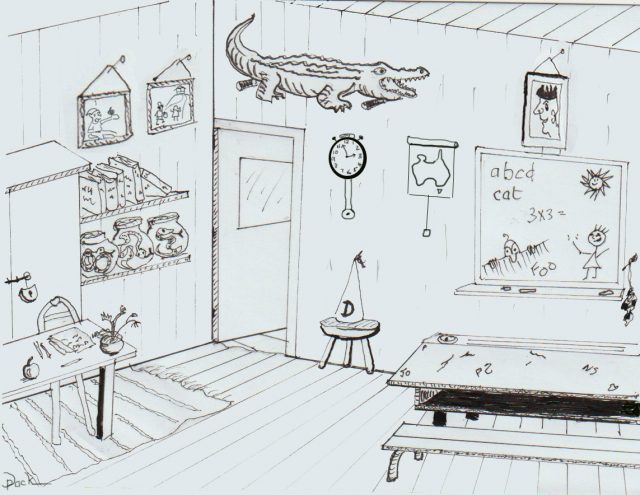 A lighthearted interpretation of the Flaxton School Classroom  – A sketch by Pauline Jack, 2020

Some of the students I remember well, and in no particular order are: Mona Clague and brother Douglas, Carol and May Wright, Bernice and Marlene Appleby, The Hetherington clan, Bert and Patrick Gallagher, Grace Perkins, Jeff Copeland, Ron Cogill, Laurene Rattle. These spring to mind immediately.

The Flaxton Provisional School was established by the Flaxton community in 1922. Now almost a century later, though the building is gone, the fond memories live on. There is a history of the school and more schoolboy anecdotes available in Silky Oaks and Camphor Laurels: Centenary of the opening of the Flaxton Provisional (State) School, 1922 – 2022 by Gordon Plowman.