In the process of time and human endeavour, and when reflecting on grand pioneering achievements, we ponder on how success was achieved in the opening up of thick dank vine scrubs, to make possible ultimatelv the flourishing rural areas with their fertile soils. Such is the scene at Montville the contiguous range areas, and the farms that now line the mountainous yet evenly-graded and sealed surface road connecting Montville with the rail-head at Palmwoods.

The official opening of the last section linking Palmwoods takes place on December 4.

Montville, or as it was first named, Razorback, was originally settled about the year 1890. Like many other places in this new country, it first came under notice on account of its magnificent timbers, including cedars, pine, beech, etc. The hardy and resourceful timber-getters of the pioneer days performed wonders in hauling the logs out of well-nigh inaccessible places. Their difficulties were not at an end when they had got them out of the gorges, and then down the eastern spurs. These spurs were so steep and narrow that it was necessary to pit saw the logs into flitches before any attempt could be made to transport them down the spurs.

The first road used was that which was at the top of the spur which runs from the Montville State School to Hunchy. This was very steep, narrow and rough in places. Later as the district developed it began to become a fruit-growing area. The main drawback was the difficulty of transporting the products to the railway. It is related that the late Mr. W. J. Butt (father of Councillor C. Butt, of Maroochydore) took the first load of fruit over the road per medium of a horse and slide. It is reported that the slide was so worn out when he reached Palmwoods that he considered it of no further use and discarded it. Messrs. Remington, Harry and Fred Smith, H. Muirhead, J. Hallett, W. H. Harvey and others set out to improve the road down the spur. Working hard for an improvement and with the continual increase of settlers in the meantime including Messrs. A. Bowser, R. and W. Dart, F. Brown, E. Vining, the settlers left no stone unturned to satisfy their needs. 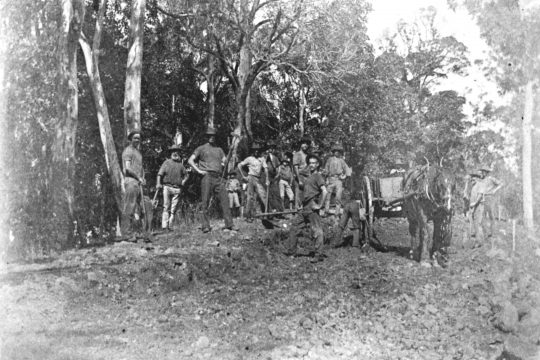 About the year 1910 another scheme to put a cutting on the western side of the spur from Hunchy to Montville was considered. Maroochy Shire Council let a contract to Messrs. Bowsers Ltd. (Brisbane) to construct the cutting for a total distance of approximately three-quarters of a mile to the top on an average grade of 1 in 7 ½ to within about 150 yards of the top and then a grade of 1 in 5 to the top. This road was to have a metalled surface and was constructed, for about £1,100. This proved to be the outlet for the district until the opening of the mountain section of the Montville-Palmwoods main road on 23rd November 1929.

The name of the district had been changed to Montville from Razorback in 1899. In the meantime, the district had become one of the best known fruit-growing areas in the Commonwealth for citrus and pineapples. By this time approximately 25-30 horse drawn fruit waggons were carrying almost daily the produce of the district to the railway. The return trip was still an arduous and, at times (in wet weather), a dangerous one, and occupied usually from 7 a.m. to about 3 p.m.

Agitations were active for the construction of narrow gauge tramlines to the outlying producing areas and already Mapleton and Buderim Mt. had moved in this direction. The Montville fruit-growers moved in the matter and approached the Council and the Government. Approval was given for the necessary survey to be carried out. The route was from a point on the road in the hollow to the west of the Montville store following the gully in the south west direction and crossing the Montville-Flaxton road in the hollow at the foot of the hill known as the Red Hill. On the front of the range it ran in an easterly direction down the slope of the range until it came into Hunchy near the hall. Skirting the road from there almost to the Parson’s Knob the route continued in a northerly direction and wound its way to the Woombye railway station. The length of this route was 9 1/4 miles. The Treasurer (the late Hon. W. H. Barnes) received the request very sympathetically and promised his reply in a few weeks’ time. That was in July 1914. Before the Treasurer’s reply was due, World War I was declared and so the whole proposition was shelved. If I might be allowed to say so, it was a lucky day for Montville so far as our transport troubles were concerned. There was nothing left for the time being but to patch up the road and carry on. The Government had created the Main Roads Commission under the leadership of Mr. (now Sir) John Kemp. A strong committee with Mr. L. G. Swain (chairman) and Mr. T. H. Brown (secretary) was appointed to approach the Commission. Of the original committee the only surviving members still resident in the district are the two afore mentioned officers and Mr. G. E. Brown, who was the auditor of the committee. The only other member of the committee surviving is Mr. S. M. Dart (Kenmore Brisbane). Messrs. T. H. Brown G. E. Brown, J. J. Thomas, R. H. Goodwin and Councillors (the late) H. Lingard, all residents of the eastern end of the district, subscribed the sum of £8 and engaged Mr. Vernon White surveyor of Buderim, to run a trial survey of a route which they thought would meet the requirements of the Main Roads Commission.

For two days Messrs. T. H. Brown, J. J. Thomas and Mr. White scrambled over and under lantana to see what could be done, and it was gratifying to hear at the end of the task Mr. White’s assurance that a grade of 1 in 25 could be obtained that way. This report was placed before a meeting of ratepayers who instructed a deputation to approach Mr. Kemp and to seek his approval for a trial survey. This Mr. Kemp agreed to do and Surveyor Foster was given the task of locating the route which the road follows to-day. On the 14th November 1922, the Maroochy Shire Council was advised by the Commission that it was their intention to declare the road under the Main Roads Acts. To this the Council gave its consent and on the 31st March 1923 the road was proclaimed and gazetted as a main road. This was for the mountain section, including the section from the old Montville road near Remington’s property to the foot of the range, a distance of 5 miles. Subsequent gazettals (the latest being on 11th June 1949) increased the length of the road to 6.51 miles.

Twenty-five years have passed since a disagreement arose among interested landholders at Palm woods as to the route that the road should take through that town. Now the final section of the road has been completed and will be officially opened on December 4 next. The thanks of all are extended to the present Shire Chairman (Mr. D. A. Low, M.L.A.) for the great help and push he gave the project and to the Main Roads Commissioner (Mr. E. R. Williams) for his agreement to the proposition and to his promptness in having the work carried out. Mr. Williams also agreed to an 18-ft. width of bitumen for the construction of this road. The foresight in allowing such width will save the Commission and the ratepayers a great deal in future maintenance. With the opening of this splendid road, the people of the Montville district feel that their efforts over the 64 years of the district’s existence have now been crowned with success.