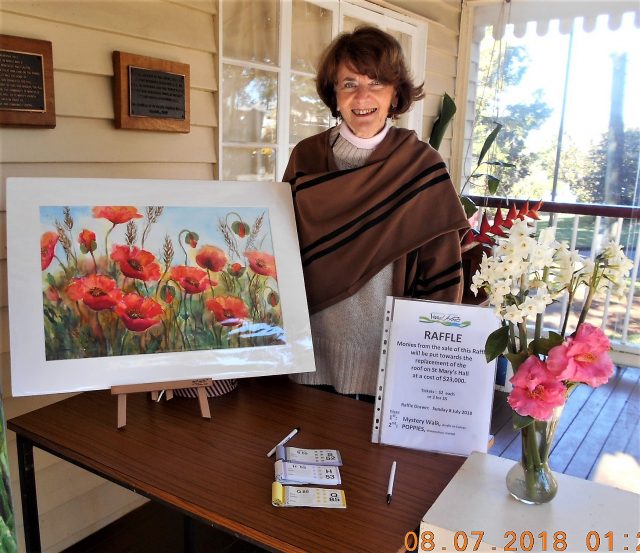 NO matter where Jocelyn Bannister goes in the future, she will always be a Montville citizen. Joce was presented with the 2020 Montville Lifetime Citizen Award in recognition of her contribution to the community. A local resident  for thirty-six years years was a little embarrassed by the accolade. “I haven’t done anything on my own – it’s always been with other people,” she said.

Joce’s connections with the Montville community have been through owning and working in various businesses in the town and involvement in different community groups. However, some of her most important work has been in steering the renovation of St Mary’s Hall, the former RSL hall. Joce originally hailed from a cattle property about 90 minutes from Eidsvold, and worked in a stock and station agency, as a governess in western Queensland, and as a nanny in Tasmania. After meeting and marrying Allan, the couple moved to a property near Biloela where they farmed for 16 years, initially they were dairy farmers, but then they moved into lucerne, wheat, cotton and beef cattle. After briefly dabbling in a motel, they bought the Montville Village Store with Jocelyn’s brother and his wife, and quickly got to know the area and its residents.

After some time working long hours in the store, they sold and Joce had a year off before purchasing the post office, where her old school friend, Gillie Warren came to work for her, eventually taking it over. In semi-retirement, Joce relieved at other post offices and businesses and worked at a clothing store, at The Bowerbird, and at a gallery.

She began volunteering in the 1980s with Meals on Wheels, but also became involved with Neighbourhood Watch, St Mary’s Church and St Mary’s Hall. These days, she volunteers one afternoon a week at the Range Care Op Shop.

The Bannisters have moved several times since they came to Montville but have always remained in the area.

In Joce’s eyes, Montville has the perfect combination of small town, natural beauty, green trees, and temperate climate. “It’s a nice community. We like the small, village type of area,” Mrs Bannister said. “We have thought about moving but if you look around, there’s nowhere else that has everything we have here on the Range.”

This is a lifetime citizen whose heart will always belong in Montville.

Based on an article in the Sunshine Valley Gazette, 2020