A Family who shaped early Montville

Edward William (Bill) Vining selected Portion 143 V (Survey Plan M37.1168 – Selection No A. F. 2598) on the 14th January 1895. The deed was prepared on 22nd March 1901. The block was 86 acres at the end of what is now known as Western Avenue. It was a steep block with the western side running down to the Obi Obi Gorge. The northern side included Pulpit Rock and the escarpment overlooking what is now Kondalilla Falls. On 13/9/1895 land was leased for 2/6 (two shillings and sixpence) an acre. The family called the block “Lands End”.

Edward William (Bill) was born on 26 June 1858 in Sherborne, Dorsetshire, England. His father was John Vining and his mother was Elizabeth nee Diment. At this time Edward William’s father was a road labourer. His younger sister, Elizabeth (b1861) was a boot fitter and his brother James (b1864) was an Agricultural Labourer.

As a young 22 year old, Edward William married Caroline Elizabeth nee Bignall on 22 July 1880 at Wincanton, Somersetshire, England. Caroline was born 18 August 1858 and was from Stetham, Surrey, England.Their first son was born on the last day of 1880 followed by a daughter two years later. Their third child was less than a year old when Edward William decided to establish the family in Australia.

Edward William sailed from London on the S.S. New Guinea in 1885 arriving in Brisbane. Two months later Caroline arrived with young William, Rose and baby Thomas John. Along with her mother, Eliza Bignall they had sailed on the “Duke of Sutherland”. They lived at Toowong and later Goodna. Their son, Charlie, was the first of their children born in Australia. Two girls after Charlie died in infancy. By the end of 1891 the family had eight children, so it was quite a decision to move to Nambour where Edward William worked for Queensland Rail as a lengthsman between Nambour and Woombye. He worked alongside Mr Cronk who later purchased Portion 80V and became a near neighbour along the Western Road. On January 14, 1895, after three years at Nambour, Edward William applied to select an agricultural farm before survey at Montville. The accidental death of their son, Thomas John just a fortnight earlier must have been a sad time for the family.

Edward William accepted portion 143V and set about clearing the land, living there from July 1895. The Deed of Grant issued in 1901 details a house 24 ft by 20 ft built of sawn hardwood with a 7 ft verandah, a kitchen ( 13 ft by 13 ft) and a shed (for the cart) with loft, five acres cleared and planted with bananas, corn, strawberries and green feed and 8 chains of fencing erected. A new Deed was issued to Edward William in 1904, showing an area of land 1 rood and 26 perches taken from his property for a road. Edward William signed the new Survey Plan stating that the land was to be used for the new road for public use. 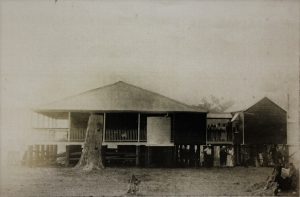 When Caroline Vining settled in Montville she had 6 children aged from 15 years to 6 months.  The two older children were considered too old to attend the new Razorback Provisional School when it opened in 1896, but the next three, Charles, May and Daniel were enrolled. Another four children were born at Montville between 1895 and 1900. Maud started school in 1900, Lottie in 1902 and Joseph attended what was now the Montville Provisional School in 1904 while Polly and Anetta were enrolled in 1906. 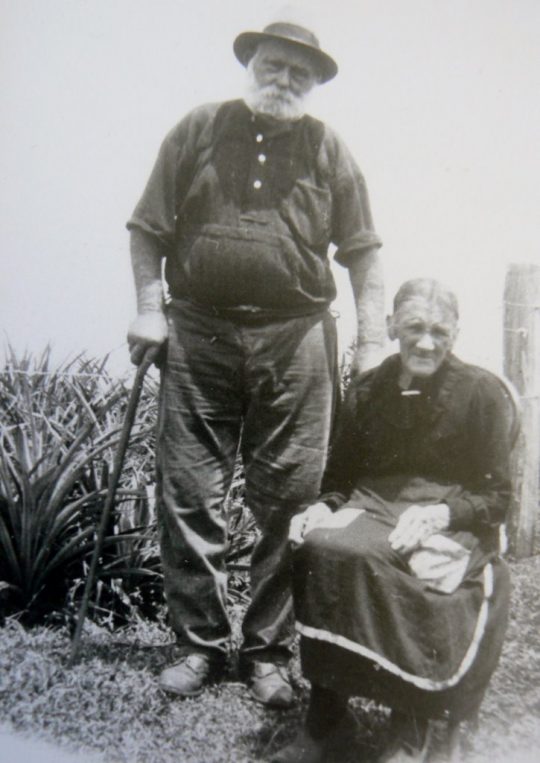 When Edward William (Bill) moved to Montville he gave his occupation as a labourer. He helped build the road now known as The Razorback along with other local menfolk. He established his farm and built his home, raising a large family and supporting his extended family – his mother-in-law, Eliza Bignall, lived with them. Edward William’s and Caroline’s daughters were married at the family home and remained quite close allowing many family occasions where the couple could enjoy their grandchildren.

Edward William had a licence to make 80 gallons of wine per year – 40 gallons of grape and 40 gallons of orange. Although he did not drink himself, he took great delight in getting visitors a little tipsy. He even had a cellar under the house. 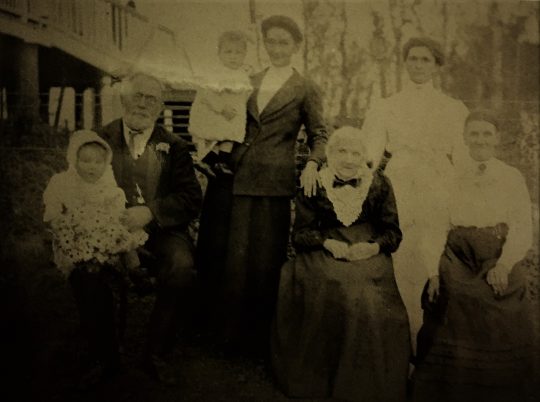 Caroline nursed her mother for four years until her death in 1924. Granny Bignall was almost 94. Caroline and Bill lived in Montville for 32 years before selling their home to Mrs Alice Acton in 1927. Along with Netty, they moved in with their eldest daughter Rose and her husband, Bill Jones who worked as a clerk at Montville. Caroline’s health deteriorated and she had been unwell for a long time before her death on 20 May 1928.  At this time Caroline and Bill Vining had 38 grandchildren. Their children had married locals and made lives for themselves in Montville and the surrounding Districts.

Edward William Vining died on September 26 1937. He had moved to Windsor, Brisbane a few years before his death. Caroline and Edward William Vining are both buried at Woombye Cemetery. The Vining family are remembered with great respect in the Montville community for their hard work in clearing the land, establishing early farming, volunteering for War, and raising a family who have inherited their pioneering spirit.

This article is based on research by D. and C. Vining.