Louie made me a cap – More on our POWs in Flaxton

Gordon Plowman remembers a cap made by an Italian POW for him. This one memory has helped tell the story of the Italian POWs at Flaxton.

Flaxton is a farming district between Mapleton and Montville on the Blackall Range in the Sunshine Coast hinterland. Bananas, citrus fruit and later pineapples were the main crops of the district.  The other main industry was sawmilling.  Gordon’s father Ray in partnership with other locals set up a small mill making cases for the fruit and then later established a hardwood sawmill.  During the war, they also became charcoal producers, as charcoal was in demand for the charcoal burners to run vehicles. It was a small community, with a population of 155 in 1947.

Gordon relates, “I was born in 1940 and vaguely recollect ‘Louie’ who worked on a pineapple and citrus farm.  He made a little cap for me and I well remember the tassel which hung down the back.  He gave it to my mother and said, ‘For the Bambino’.  In later years I tried to find Louie through the National Archives but was told without his family name, this would be impossible.”

But this project Footprints of Italian Prisoners of War in Queensland ¹  is about making the impossible, possible. And Gordon has now ‘found’ Louie.

Louie was Luigi Caputo a young farmer from Montagna di Basso Potenza. He is seated in the photo below, first on left.  His military record highlights he was married with a daughter.  Louie was sent to the farm of F.W. Potts and D.B. McHaffie, Flaxton on 5th March 1944 together with Francesco Tozzi from Reino Benevento. 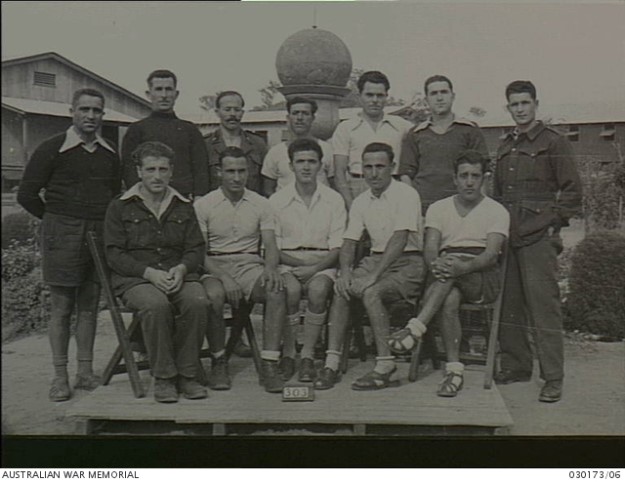 “My brothers Harold (13) and David (16) would take these POWs swimming in Bon Accord.  They would come over of a Sunday afternoon, Mum would give them a drink and some cake and they would battle their way through the forest with my two brothers to cool off in Bon Accord rock pool.  In the 1940’s it was hidden away in thick scrub with no walking tracks,” Gordon adds.

Three other Flaxton farmers employed POWs and snippets of memories are remembered by Gordon and his brothers.  There is a memory of the wine made with pineapples by the Italians at Frank Mayne’s farm.  Quinto Bernacchi, Giuseppe Berrettini, Ippazio De Blasi and Carlo Maffei all worked on this farm.  Most likely Quinto and Giuseppe were the wine makers as they were on the farm for  seven months while Ippazio and Carlo had a one week placement.  Norm and Honour Mayne also welcomed the Italians onto their farm in Flaxton with Biagio Peluso and Pasquale Serafini spending eight months at Flaxton.

J.R. Perkins employed Guerrino Fregni, Giovanni Isopi and Guerino Lombardozzi.  Gordon adds another memory about Mr Perkins’s POWs: “I remember that a heavy hessian curtain at the end of his packing shed was out-of-bounds because this was the entrance to the POWs living quarters, which I imagine would have been very basic.  At that time we had no electricity, sewerage or reticulated water,” Gordon reminisces.

Another recollection of the Flaxton POWs is about church.  With no Catholic church at Flaxton, the Italians would be picked up by the authorities and taken to the Catholic church in Nambour.  Gordon mentions, “According to my brother, one of them was not a catholic and used to object most strongly at being taken to church.  The Italian POWs were respected and made generally welcome in the small Flaxton community and I recall by mother speaking highly of them.  I never forgot the little cap Louie made for me.”

¹ The Footprints of Italian Prisoners of War  project is an ongoing free service.  Gordon Plowman’s story appears in Walking in their Boots by Joanne Tapiolas.  His story is reproduced here with his kind permission. Joanne Tapiolas has also invited MHG readers to view the story at https://italianprisonersofwar.com/2019/10/30/louie-made-me-a-cap/