An explanation and description of the memorial Gate and Pillars to remember those who fought in World War 1.

These gates are located at the front of the Montville Hall in what is now named Memorial Close. They are the site of the annual Montville ANZAC Day Dawn Service held at 5.30 am on 25 April. 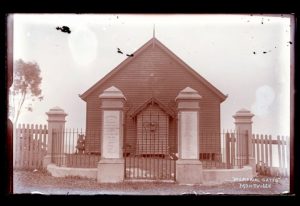 These gates were erected in 1921 and Jane Smith who was on the Montville Patriotic Committee who designed the Memorial was asked to unveil it as she had six sons who had enlisted or attempted to enlist. These records come from the A.L. Petrie Papers, Fryer Memorial Library Brisbane    Letterbook, 29 Sept 1921   Mr Petrie’s Account to the Montville Patriotic Committee: For supplying and erecting two stone pillars with marble panels in face, total height 7½ feet, with 4 feet entrance gates, 2 stone pillars, 6 feet high at sides £116/-/-  Plus   15%  17/8   Cutting and Lead inscription, 415 letters at 7d each

ERECTED BY THE RESIDENTS OF MONTVILLE DISTRICT IN APPRECIATION OF THOSE RESIDENTS WHO ENLISTED IN THE GREAT WAR 1914 -1919.
FALLEN (6 names listed)

These Memorial Gates were unveiled on 11th November 1921. The pillars are made of Helidon sandstone. They were purchased by the people of Montville and built by Mr W. Scott for Andrew Petrie, stonemason. This memorial is unusual in that Rejects are listed-those who enlisted but for varying reasons were not accepted. 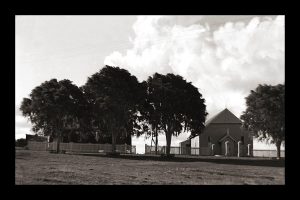 In 1923 six Ficus benjamina trees were planted to commemorate the six men who had fallen.

In 1935 a seventh tree was planted outside the gates of the Montville State School for Charles Smith who had died in 1922 from emphysema, a condition he developed during the war. Plaques were attached to each of these trees.