Montville Memories by the Moore Children

Our parents, (Cecil and Dorothy), moved the family to Queensland from Victoria in October, 1955, ostensibly for our mother’s health.  She had not long been diagnosed with Diabetes, and the doctor claimed a move to a warmer climate was the way to go.  So we were packed up into a truck, carrying our belongings and a caravan towed by our second hand, “guinea gold” Holden Sedan, of approximately 1950 vintage.

We arrived on Wednesday, October 5.  It was to a small crops farm of 17 acres on Western Road.  (Not Avenue as it is today). It consisted of 80 Macadamia Nut trees, 30 in the top section and the remainder in a paddock below – which Brian had to mow with the Allen mower.  It also had many pineapple plants, a Loquat tree, a Custard Apple tree and several Banana trees – and acres of Lantana.  The property had a high hedge bordering the road, which became very threadbare when the Westerly winds prevailed.   Dad named our property “Dunrovin”.   The house had three bedrooms, and a verandah on three sides, closed in on the eastern one, to make room for more bedrooms.

We all had fond memories of the Yellow berries which grew on the side of Western Road, opposite our house.  They looked just like Raspberries, but yellow, and oh, so delicious!  It is a great shame there are none left.

Not long after we arrived, a landslide in the pineapple patch took many of the plants away.  The family had to live on the proceeds from the Macadamia nuts, until new pineapples were ready for harvest.  That is where we children had to help out.  The nuts had to be picked up, then poured through a husker to remove the woody “shell”, and then bagged up to be sent to the Buderim Ginger Factory.  Dad also tried his hand at growing beans, sending most of them to Southern Markets. – market prices were often disappointing.

The Habgood Family – of parents, Frank and Dorothy, and their children, Raymond, Alan, Rosemary and Margaret, had come to Montville from Sydney, a year or so before we arrived.  Our two families became firm friends.  They had several large Pecan Nut trees in the front yard, and a pineapple plantation at the back.  They also had banana trees, and as children we would pull sheets of “bark” from the trunks and toboggan down the hill to Cuthbertson’s house.  On Guy Fawkes night they always had a monster bonfire and of course, fireworks.

Frank drove us all to Sunday School in his vehicle, kids would be hanging off it all the way.  He was the Superintendent of the Sunday School at the time.  We children have remained in touch over the years.

Each year a Sunday School picnic was held at Alexandra Headlands.  We travelled on the back of Mr Tom Brown’s truck which had seats placed on the tray.  Ice creams in little tubs were issued out from the tall green canvas containers filled with “dry ice”.

When pineapple prices were low, Dad planted Strawberry runners.  Some of the fruit was picked for the Brisbane and southern markets.  These were put into punnets with pieces of fern or banana leaf to enhance the appearance.  Others were “topped” (removing the top greenery) and put into tins approx. 12 inches by 8 inches and about 4 inches high.  These were destined for the Northgate Cannery, Brisbane, to be made into jam.  We would ring the Hansens and pick up their strawberries to be taken with ours to the train at Palmwoods.  Both families took turns to make the trip.

One day, Gwen, our eldest sister, was asked to clear the undergrowth from the paddock on other side of the gulley – the fire crept towards McCulloch’s property and set fire to his pineapple patch.  Otherwise, Gwen was of great assistance to Dad on the farm, helping to plant and spray the pineapples, plant and pick beans etc.

We children also had to make the crates for the pineapples destined for the Brisbane and southern markets.  Dad had a metal frame on the bench to hold the end pieces firmly, in order to hammer in the nails. There was another frame to hold these ends pieces, to facilitate attaching the sides.  The components all came from the saw mill at Palmwoods, including the woodwool to pack between the fruit.

White’s owned the General Store at the junction of the main road and Western Road.  It had a Post Office attached.  We think Mr Cuthbertson was the Post Master.  (He flew Typhoon fighters in the War.)

Mum had some Jersey cows, and sent the separated cream to Maleny Butter Factory.  When Brian was asked to bring the cows up for milking, he would chase them so quickly, they would not let their milk down!

On one occasion, one of the cows got Bloat, and Dad had to stab her stomach to let the gas out.

Heine Venske had a bull which was agisted in a paddock beyond our place.  On one occasion he was moving his bull, but our front gate had not been closed.  The bull entered our property and came round the side of the house just as Mum was on her way to the milking shed.  She threw her boots and bucket at it.  Brian’s dog, Spats, was barking furiously from the safety of underneath the house.  Fortunately Mr Venske soon arrived to retrieve his bull.  (Mr Venske has a son Paul, whose nickname was ”Punwan”.) 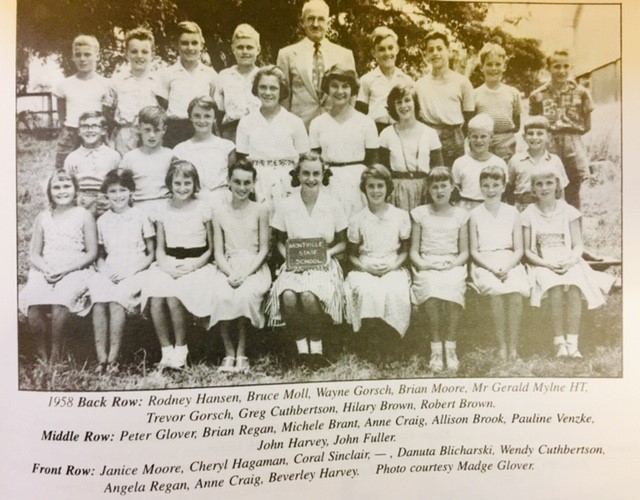 We rode our bicycles to the State School.  Brian says Chubb (Patricia) Harvey’s younger sister rode a horse to school.  It was kept in the paddock below the school, which later became the sports ground.  (“Busy” Doessel and I usually vied for first place in the running races.) 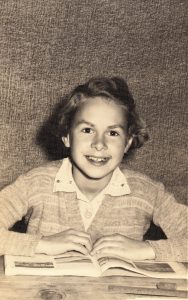 I remember the bell ringing to get us lined up to march in to school, to the tune of “Colonel Bogey” played on the gramophone.  On Brian’s first day at the school, he was put in the rubbish bin, bottom first, by Royce Williams, and needed  to be extracted.  (Brian’s nickname at school was “Brindle”.) 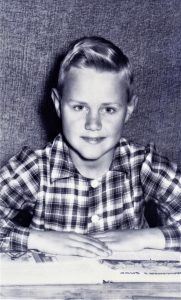 He remembers that the Senior boys had a club in the hedge, until the hedge caught fire!!

(Principal) Gerry Milne used to keep the kids in after school, especially if there was a storm brewing.  Mum would sometimes turn up to have us released, much to his embarrassment.

While still at Montville State School, the senior students would travel once a week to Nambour High School to attend ‘Rural School’.  This consisted of sewing lessons, and on alternate Thursdays, we would spend half the day in cooking lessons. I enjoyed the cooking but my sewing left a lot to be desired.  The boys did manual arts, woodwork etc. 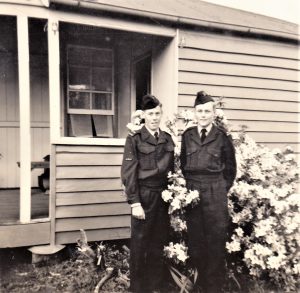 Some of us also did a type of work experience by travelling to Roy’s Orchard at Palmwoods, to learn how to pack oranges into cartons.  Pam was very neat. 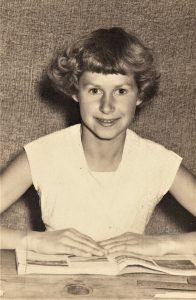 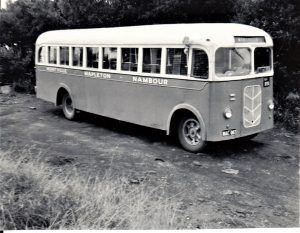 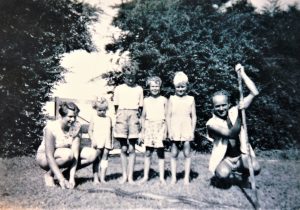 The Moore Family with their First Carpet Snake

Carpet snakes were a new experience for us. At first we were very wary.  Dad caught one and believed he had killed it.  We were poking and examining it closely, but next morning, it had vanished!  Eventually, Dad kept a carpet snake in his shed in order to keep the mice population under control.    Unfortunately, it gained access to the chook pen on one occasion – we could see how many it had eaten by the number of lumps in its length. One day Brian came home with a ten foot one, wrapped around his shoulders.  He came into the kitchen and nearly gave Mum a heart attack.

Because we lived in the country, a long drop toilet was a necessity.  We children were engaged several times in digging a new one.  I clearly remember climbing up the ladder to get out of it as it became very deep.

One thing that has affected me ever since my stint at Montville, is a fear of fires.  So many buildings burned down while we were there.  Gwen remembers sitting on our back steps and seeing smoke billowing from Smiths Workshop.  Other buildings that went up in flames, were Manjalda and Mayfield Guesthouses, and several residences.  The school bell was rung to alert the residents.  (White’s General Store and Post Office also burned down eventually, and, indeed, 10 years after we left the district, our old home suffered the same fate.)

Dad drove Brian out to William’s home one day to bring the Draught horse, “Dolly” back to our place.  (“Dolly” did all the ploughing until Dad bought the Massey Ferguson tractor.) 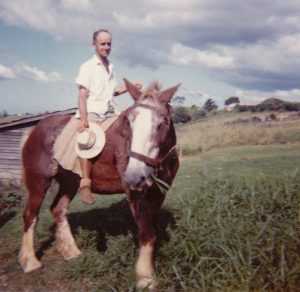 A pillow was strapped to the horse’s back and Brian set off.  Unfortunately for him, the road had been changed since the horse was last on it, therefore she set off through the bushes and trees of the original road.  Brian arrived home very scratched and bruised.

Alan Harper, our next door neighbour ran a pineapple farm also.  He became our tennis coach when we formed the Panorama Club and participated in matches as far afield as Yandina.  Tennis practice was on a Saturday morning.  Dad started to build a tennis court next to our house, but it was never finished.

Gwen says, Alfie’s shop had a telescope on a top floor.  He claimed it was so powerful, he could see a man reading a newspaper in Maleny, or the names of ships going up the coast.  Alfie sold lollies, cigarettes and general goods.

Cedric Deane lived next to Alfie’s shop.  He had a large Butterfly and Beetle collection – all skewered to the boards with pins.

We learned to dance in the School of Arts (Hall) for the Debutante Balls – Pride of Erin, Gypsy Tap and Progressive Barn Dance.

Mr Hooper invented an automatic pineapple picking machine – they had to shorten the rows in order to make it work.

We all remember the cute little sugar cane trains crossing Currie Street, Nambour, on their way to the Sugar Mill in Howard Street.

The Habgood and Cuthbertson Families moved back to Sydney.

By 1965, Janice was the last one still living at home – the rest of us had started our careers.  She moved with Mum and Dad to Clontarf and attended the High School there.

These memories are as we think we remember them.

Dad finally gave up work on the farm and went to work in Ford’s Motor Factory in Brisbane and commuted each week to Montville, until the move to Clontarf.

Gwen worked as a nurse at the Selangor Private Hospital in Nambour and later joined the Air Force as a medical orderly.  She has three children and lives in Queensland

After a stint as an Air Hostess with TAA, Pamela became Personal Assistant to a Chanel 7 executive in Sydney.  She now lives in Victoria

Florence Kaye worked in the office at Nambour Hospital for seven years then moved to NSW, and into customer service/sales. She lives again in Victoria

Brian joined the Navy for 12 years, and became a Mechanical Engineer.  He is married and lives in Queensland

Janice trained as a dental nurse.   She married Thomas, her long time Swedish penfriend, and continued her involvement in Dentistry as a Dental Hygienist for 36 years, in Sweden, until retiring two years ago.  She has two children.