The Story behind the Name: Marshall Road.

Alfred Marshall came to the Blackall Range around 1905. He purchased some 608 acres along the Eastern escarpment between Montville and Maleny. His home, ‘Highlands’, was situated opposite ‘Craglands’, formerly the home of the G.E. Brown family; more recently the home of Dawne and Tony Barnett. 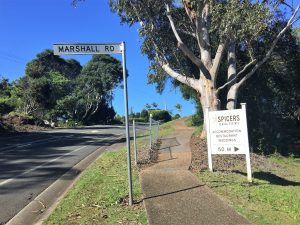 Marshall was born on 04/04/1858, in Brisbane, the seventh of 10 children, most of whom predeceased him. One of these was his late brother, Mr. W.G. Marshall formerly Town Clerk of Brisbane. His parents,William H.C. Marshall and Emma Elizabeth nee Fairfax, had been selected for migration to Moreton Bay by J.D. Lang¹ and arrived in Brisbane in the Lima in 1849. Marshall was educated at the Normal School in Brisbane.  He was always a bachelor and lived in Mackay for a number of years where he was Manager of the Australian Joint Stock Bank before moving to the Blackall Range and taking up Portions 127v (134 acres), Portion 1 (157 acres), Portion 124v (160 acres), Portion 116v (154 acres), Subdivision 1 Portion 45 (2 acres) and subdivision 1 of Portion 236 (14 acres). This latter was the land where Marshall built his home. He also owned Portion 133v (123 acres) in County March of unimproved land watered by the Obi Obi Creek and suitable for dairying. It was situated about a mile south of the Obi Obi township near the junction with Baxter Creek.

Alfred established pasture of paspalum and clover, wonderful for dairying on his Balmoral properties. In 1926 he made an exchange offer to Council for some of his land to become a road. 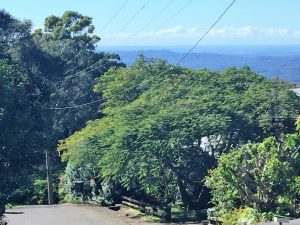 View to the east from the top of Marshall Road

Alfred Marshall was buried on his property on the Montville Balmoral Road with Rev. J. de la Perrelle officiating. He died without a will and it was left to his brother, George Edwin Marshall to manage his affairs as his executor. When George himself died on 01/01/1940, the properties (approximately 608 acres) were auctioned by T.H. Brown the local auctioneer, and later sold to Mrs R.J.E Murtagh of Kenilworth in September 1940. In December 1940, subdivision 1 of Portion 236 (14 acres 25 perches) was again advertised for sale as prime land with commanding views of the coast, suitable for residential, sub-division and fruit growing with permanent water and electricity).

Part of this land is now the small subdivision of 7 houses on Marshall Road.

¹ John Dunmore Lang has been called the Father of Queensland. He wrote a book entitled “Cooksland in North East Australia, the future cotton field of Great Britain, its characteristics and capabilities for European Colonization with a Disquisition of the Origin, Manners and Customs of the Aborigines.” Lang was a self-appointed emigration promoter. Lang sought to bring out free colonists from Scotland rather than populate the area with more convicts, Chinamen and Coolies. One of his ships was named Fortitude, the origin of the name Fortitude Valley in Brisbane.