MONTVILLE PLACE NAMES – The Other Road

First Nation people of the Kabi Kabi Group walked the Tarrawonga Track from the waterholes in what is now called Russell Family Park to Baroon Pocket to participate in the great Bunya Feasts celebrated up until the mid-1880s. The track followed the ridge line west until descending to the Baroon Pocket roughly where the Narrows Road is today. It was logical that when George Butt put a road west to his selection in 1887, that he followed the Tarrawonga Track. In 1893 Henry and Fred Smith selected along the eastern end of Butt’s Road. As others selected lots further west, including Edward Cronk, Hamilton Muirhead, William Harvey and William Vining, the road was gradually extended to where the current bitumen ends – at Vining’s original home. Initially, it was a dirt track, dusty in the dry and muddy in the wet.

The early 1900s saw a second wave of settlers. The Smith and Butt families expanded and were joined by Joe Farrington (Montville’s Smithy), the Gaden Family and the Negus Family amongst others.  By 1925, a personalized telephone line was erected to replace the original ‘party’ line along Butts Road. Then, in 1926/27 a cutting was constructed to join the Eastern Road¹ to Main Street and the Western Road.  In 1932, 5 chains at the far end of the Western Road was laid with metal by a Relief Gang² aided by a number of local farmers led by William Harvey. Finally, in 1940, a power line was erected along the full length of the Western Road.

In 1944, the Rate Payers Association and the Fruit Growers Association both complained to Council that the Western Road was so potholed and overgrown with lantana that it was ‘barely trafficable’. After continued pressure from the Fruit Growers Association chaired by Joe Farrington, work commenced to lay metal (gravel) along the full length of the Western Road which was described as having axle breaking holes and uncontrolled runoff that was eroding farms. It was suggested that POWs might be conscripted to do the work but that did not happen. The road now served 50 farms with later settlers including the Sinclair, the Manley, the Gorsch and the Watkins families. 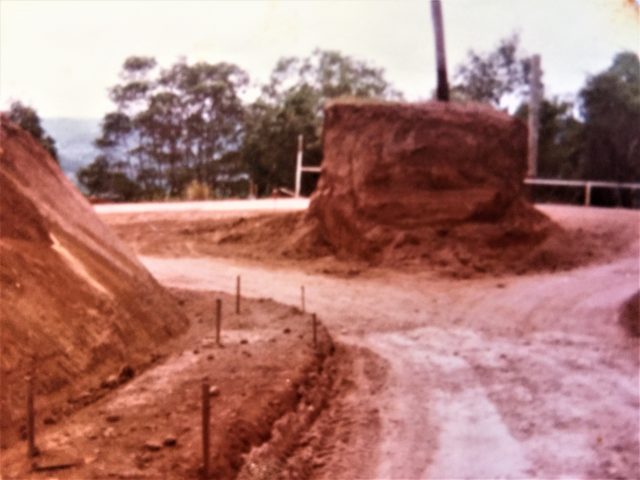 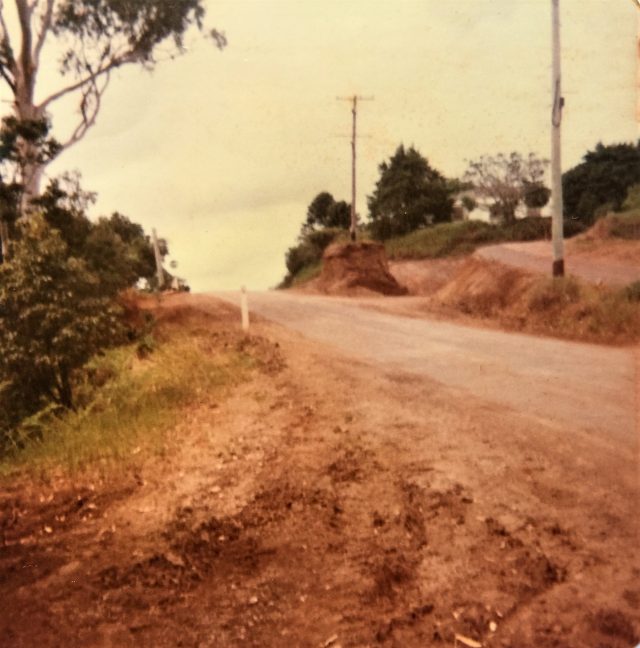 By the 1950s, the Maroochy Shire Council enacted a policy to seal its country roads and work began on the Western Road in 1952. By 1954, the bitumen had been extended as far as the Narrows Road. When Eleanor Dark published her novel, Lantana Lane, capturing the life of the Mill Hill Road community on the southern side of Montville, the Western Road acquired another somewhat parochial name – the Other Road. Dark caught the competition that existed between the two western roads. It wasn’t until the 1980s that any major changes to the road occurred. With work starting on the Baroon Pocket Dam, the road had to be straightened in parts, widened and re-bituminised and formally re-named Western Avenue. Council had also budgeted for a footpath along Western Avenue from Main Street to the Narrows but the Montville Village Association (MVA) successfully argued that it was greater priority to build a footpath from the village to the Montville Sports and Recreation Ground on the much busier Balmoral Road so the Western Avenue footpath was postponed. Forty years later it still hasn’t been built. These last decades of the 20th century saw another wave of newcomers to the road including the Russells, McClennans, and the Delaneys.

The last 50 years has seen the gradual urbanization of Western Avenue. There are only half-a-dozen operational farms left and 157 residential homes plus many more on the four side roads off Western Avenue. The rapid growth of holiday accommodation including B&Bs, holiday cottages, holiday homes and the development of tourist attractions like ‘Secrets on the Lake’, the Great Walk and the ‘Flamehill Winery’ reflect the changing economic focus of the area and contributed to the transition of Western Avenue from the pioneering Butts Road to the country Western Road to the modern and desirable Western Avenue of today.

However, the road still holds glimpses of its past. There are still Aboriginal sites and stories in and around Baroon Pocket. Henry Smith’s first home (with post office and store), Eastnor, is still there, now called Belbury; sensitively restored and holding pride of place over the waterholes of Russell Family Park. Right down the other end of Western Avenue, the original Vining Residence has also been restored as had Bianda, another early Vining home. A later home, also sensitively restored is Fig Tree, the home of the Manley Family for almost 50 years: while in the middle of Western Avenue, Len and Val Gorsch’s home is an historic gem of egalitarianism – a worker’s cottage that is a sturdy, comfortable and stylish example of early 19th century innovative Australian architecture.