2022 marks 125 years of history for the Montville Post Office.

Today residents are particularly grateful to have retained the Montville Post Office.

Its future was in jeopardy when in November 2013, residents were informed the Post Office would close because of low commercial viability and that the Post Office building would be onsold. Local Federal  MP, Mal Brough and local organisations, including the Montville Village Association and the Montville Chamber of Commerce, along with individual residents all advocated strongly for keeping the Post Office. 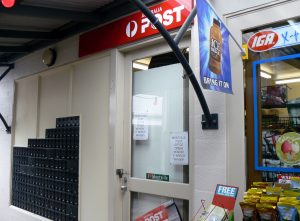 The first P O boxes to be re-sited as part of the IGA Express in March, 2014

After vigorous campaigning the Post Office was re-established as an integral part of the Montville IGA Express owned and managed by Chris and Ann Wells. It is largely thanks to their commitment that Montville still has a Post Office. It was opened in March 2014 and is a landmark in the Village Square where its window features pioneering photos of early settlement life supplied by the Montville Historical Group. 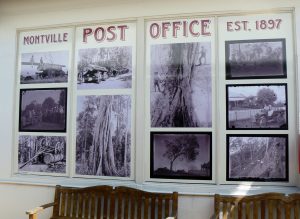 The New Post Office Window in the Village Square

Montville Post Office today provides excellent service through the benefits of air-freight, tarred roads and highways, and of course through the benefits of modern day technology and communication. Life at the Montville Post Office wasn’t like this in the past.  The narrow spurs coming up the range from the coast provided Montville’s first name, Razorback, by which it was known until November 1897 when the first Receiving Office, as they were then called, was set up by Henry Smith.  The first mailman to deliver mail to what was then Razorback, was Mr. Williams of Mapleton, who walked from Mapleton to Palmwoods, three days a week. Later on Mr J Wyer of Flaxton opened the Flaxton Post Office in his home and also brought the mail up from Palmwoods three days a week.

A daily service began when Mr. Seneschall of Hunchy opened a post office there and brought the mail up on horseback on a daily basis. Following the introduction of the Cobb & Co coach to Palmwoods, then the railway, Henry Smith realised the benefits of having a Receiving Office in the village of Razorback linked to Palmwoods because Palmwoods was linked to Brisbane. He selected land on The Back Road, now Western Avenue, and built the first cattle dip, opened the first shop and applied to the Post and Telegraph Department in Brisbane on 16 Oct. 1897 asking permission to establish the Receiving Office. He gained the approval providing the Department was not involved in any expense and providing he changed the name, as there already was a Razorback Receiving Office elsewhere in Queensland. 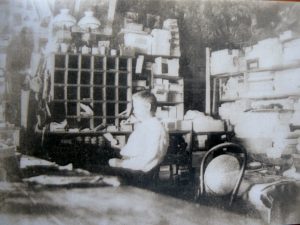 The early mails and other goods came from Brisbane to Palmwoods and then by foot and horseback and later by coach up the Razorback track. Mailman, Owen Callaghan faithfully served the communities Hunchy, Flaxton and Montville for 28 years from 1910 to 1938. 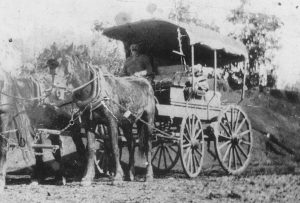 Owen Callaghan with his coach and four horses c.1915

Some say the first office was attached to a stable opposite what became the Village Green. 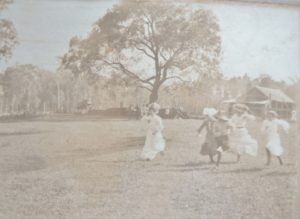 By the early 1900s Henry had built a small store on the side of his house Eastnor on the Back Road (Western Avenue) and moved the Receiving Office to that. 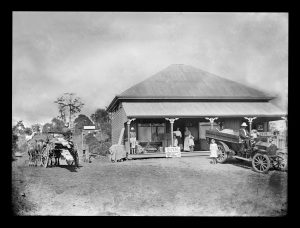 The Store and Post Office when it was first built c. 1912

In 1912 he built a separate combined store and post office on the corner of Western Avenue and what is now Main Road. He sold it to David Unwin in 1913 and it was then owned by a number of others, including the White family over the years. 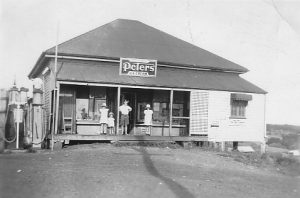 The post office and store soon became the centre of the community. Petrol bowsers were added and it was also where the public phone was sited before many people had phones. The Commonwealth Bank Agency was transferred to the post office in 1923 and the first telephone exchange was operational there in 1925. It was where the first electricity was connected in Montville.  In the 1960s a spate of fires hit Montville, lit by persons unknown. In 1965 after two attempts, the store and post office was burnt to the ground. For a short time the post office was run from the home of the Post Master, Bob Cuthbertson in Western Avenue. A post office was rebuilt on the old site within the month and Mrs Joyce Cuthbertson ran the post office for the remainder of 1965. 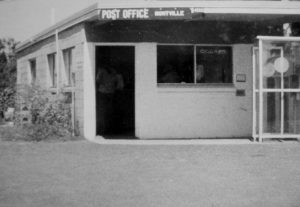 Mr Clive Blair began his 16 year commitment as the Montville postmaster at the beginning of 1966. A new besser block post office was built in 1975 down the hill in Main Street to what was becoming the main centre of the little town (where Fudgyboombahs is presently located). 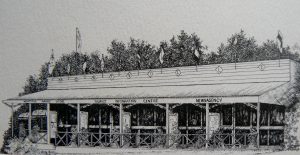