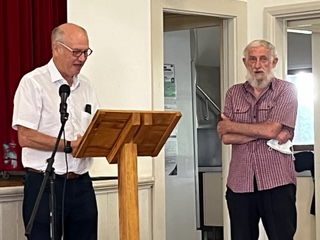 Jim Cox being presented the Montville Citizen of the Year 2022 by Michael Bradley, MVA President

Jim started out as a teacher but moved into his lifelong joy of painting in the 1990s. He moved, with his wife Pam, to the Range for space and inspiration. In 2002 they moved into their present home overlooking Lake Baroon to establish amongst other things a magnificent rainforest garden and two studios. In addition to establishing a great garden and much painting he became a strong supporter of community initiatives especially in the arts. As a regular MVA member Jim brings the strength of calmness exhibited in his wonderful wildlife paintings, to community matters always seeking positive solutions that enhance our community. 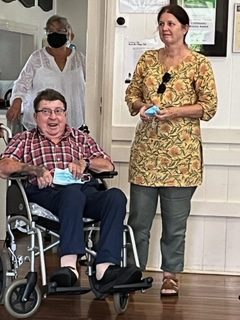 Kyleigh and Michael arrived in Montville in 1992 so I think they can truly be called worthy recipients of a Lifetime Award having contributed so much to the community over 30 years.

Their contributions to the community are legendary: creating gardens for the Uniting Church and Village Hall, fund raising at the Open Garden at the Shambles for many organisations including the Montville State School, the Rural Fire brigade and Western Queensland Drought Appeal.

For many though the most memorable legacy is the Simpson Family Bush playing for over two decades at the Montville Australia Day event as well as at other times. Much appreciated.