Montville has had a unique Australian attraction for the past century.

Secluded in the village is a war memorial which publicly reveals six Montville men who were rejected for service during World War I.  The Montville Memorial Gate, unveiled on Remembrance Day 1921, carries names under three distinct headings:  Enlistments (33 names), Fallen (6 names), and, at the bottom, Rejects (6 names); L.Swain, C.Court, T.Smith, J.Smith, C.Vining, D.Vining. Even more astonishing is that the six men almost certainly requested to be recorded as rejects.

Researchers agree the Montville memorial is one of only a few in Australia, to identify rejects.  So why were these men recognised publicly?

While no official records are known to exist, Victoria Barracks History Society Queensland curator Leo Walsh provides an account he considers close to the truth.  The six men, Walsh says, would have volunteered.  It was the Australian thing to do at wartime.

Some would have been rejected on medical grounds.  Some would have been rejected because their jobs were essential to the war effort at home.  Dairy farming and droving would have been among them.  Some would have been rejected because of the number of other family members already enlisted.  Whatever the reason, Walsh is certain the six men requested they be recognised as having volunteered.  There were extreme social pressures at the time on young men to volunteer, and it was common, both in Australia and the UK, for men who refused to volunteer to receive a white feather from some disenchanted person in the community.  The white feather was a symbol of cowardice.  It was always presented in a public way so that others knew, and the objector was recognised for the rest of his life as a man not prepared to defend his country.  The stigma stuck.  To protect men who volunteered but were rejected for legitimate reasons, small communities around Australia formed “associations of the rejected”.  They recognised these men in many different ways.  One common way was a badge the men could wear to identify themselves as willing, despite their rejection.  Rather than being disgraced by being publicly identified, the Montville men were given a salute for their willingness to enlist and serve their country.

History professor Ken Inglis also refers to associations of rejected volunteers in his book, Sacred Places:  Monuments in the Australian Landscape. He says the associations petitioned committees to put (the volunteers’) names on their tablets (memorials), but with little success. 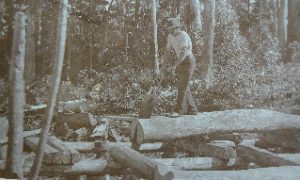 Elmslie Vining’s father, Daniel, was one of Montville’s famous rejects.  So was his Uncle Charles, Daniel’s brother.  Elmslie Vining, who left Montville at the age of 11 says his father told him both he and Charles had volunteered, but were rejected on medical grounds.  “Dad told me that he had rheumatic fever at 20 or 21,” recalls Vining, “But the main thing that kept him out (of the war) was that he had osteoarthritis or osteoporosis, or something like that, of the left heel.  The back of the heel had to be removed.  So he couldn’t wear boots or shoes without getting horrific blisters.  He was disappointed.  He didn’t want to be seen to be shirking his share (of war duty).”  Vining says his Uncle Charles had a spinal condition from a horse riding accident as a young man and spent the rest of his life “bent almost double”.  “I never heard any derogatory remarks about the men who could not serve,” he says, “It seemed to be acceptable to the community.” 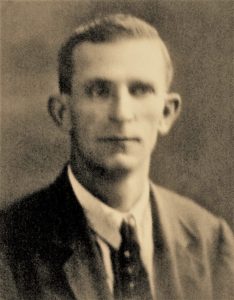 One of Montville’s oldest residents, Madge Glover, recalls Tom and John Smith were brothers from a large family.  Four sons (Alf, Bill, Bob and Charlie) were accepted for service, two were of school age. Tom was rejected because he had lost the sight in one eye after being stung by a citrus bug when working in his father’s orchard and John was rejected, probably because the farming family had already made a big enough contribution.” Bob in fact had enlisted stating he was 21 when in fact he was just 17. It is believed his father intervened and he was discharged with good character.

Charlie Court was an older brother of Bert Court, a school student for some time at Montville, and later a pupil-teacher.  The Courts had moved to Palmwoods in 1909, but possibly Charlie stayed in Montville; there is a Mrs C. Court listed in the 1925 Montville telephone directory.

Leslie Garforth Swain was a young farmer at Flaxton.  His two older children, Janet and John Swain were enrolled at Montville school in 1920 and 1921 and later attended the newly established Flaxton Provisional School in 1922.  In 1922 Les Swain is noted as the local President of the Fruit Growers Association. He was also on the Provisional Committee of Direction for citrus growing in formulating the Fruit Marketing Organisation Act.  Maybe because of his farming responsibility in the community and his young family he was rejected. In 1939 Mr Swain was President of Montville Bowling Club in 1939.  (Gillie Warren, the then local Historian researched this for journalist, Bill Simpson.  A version of this article was published in the Courier-Mail in June 2003 and was reproduced with permission as part of the Adopt A Digger Project)

The badge shown is a reject medal badge.  This could be worn by those whom the Army had not taken up for various reasons so that all would know they had tried to enlist. 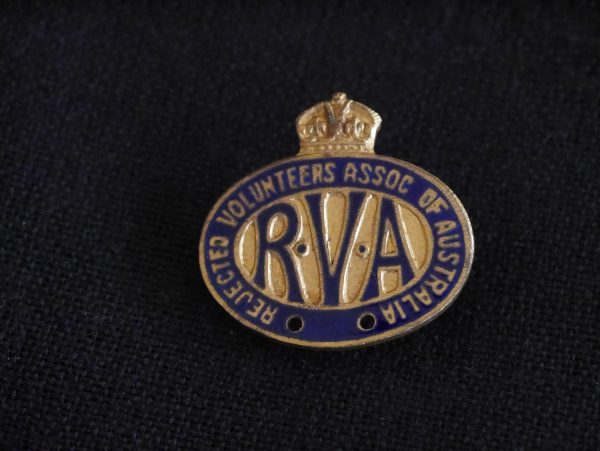