By the late 1970s the Pocket had changed. The dairy industry had collapsed and the community had moved on to mixed farming, hobby farming and some highly specialized light industry, including the manufacture of X-ray screens. In 1977, George and Aldy Johnston purchased 50 acres in Baroon Pocket from Och Wilkins, calling the block Obiwater. It was part of A J Thynne’s original selection and the silo he had built was still standing. George and Aldy realised it could form the centre piece of their new home and in doing so created a stunning home for their 3 kids to grow up in.

Their daughter, Cath Johnston writes, “as a child of the 70’s, Baroon Pocket was an amazing place to grow up. I have so many happy memories of those 50 acres with the Obi Obi Creek running through Dad’s fruit and veggie farm. Every year or two he would wedge a plank into a perfectly formed crevice in the rock face on the far side of our swimming hole and it was ’the’ hang spot for local kids and their mates. Every other big  Maleny flood would wash the diving board away and we would pester Dad until he replaced it. After a hard hot day helping Dad on the farm picking tomatoes or watermelons or kiwifruit, we would often head down to this spot on the Obi and cool down in the crystal clear waters. A couple of times Dad blew up our lilos and we started from the creek at Rassmussen’s place and floated the whole way down the Obi and its many waterfalls, through the Narrows cliff faces and were collected by Mum at Kondalilla. Glorious Days. 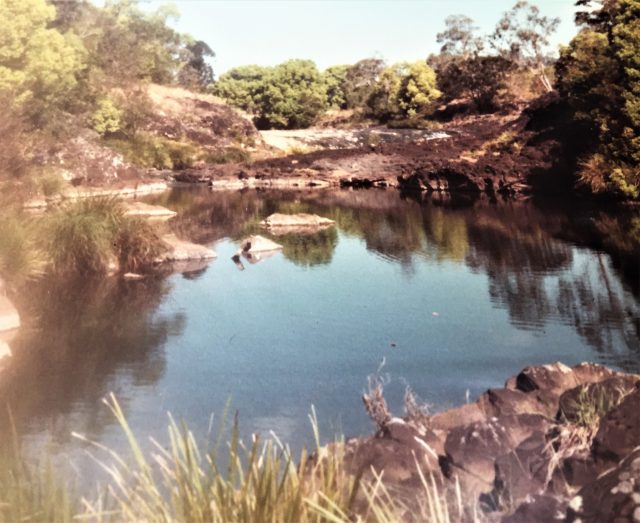 My brother Rob and I spent hours and hours down there by ourselves and memorised and named each rock, bend, cascade and waterhole of that creek… and if I close my eyes now I could still tell you how many seconds and in what direction to kick off to find ‘underwater rock’ just high enough to stand on and poke your head above water in the middle of the swimming hole. Baroon Pocket is now Lake Baroon, so I have saved long and hard to create that childhood for my kids now and have just bought a place in Flaxton with a creek and waterhole. I get nervous when they are off exploring for hours on end, but we grew up with that freedom and independence encouraged and nurtured by real life experience… and I can think of no finer way to grow kids into independent practical adults.

Another childhood highlight is our huge Camphor Laurel tree about 50 metres from the back door of our silo house. Dad spent some time building us the most amazing 2 story treehouse with fireman’s pole, trapdoor, and lookout roof. He wedged railway spikes as foot holes on most branches leading through and around the treehouse and the tree was so big we could play tiggy hide and seek for hours without being caught. It wasn’t just us that used the treehouse. When other local kids came back from playing in our swimming hole, they would often stop off at the treehouse and use its shelter against the rain that seemed to happen every other day or for weeks on end when we were kids. I remember looking out the window at Tony and Wesley Bryce’s drowned rat faces looking back at me from the treehouse window! When those rains happened, we would pull each other along the drain ditches by the side of our road on a little plastic toboggan… covered in mud and screaming like Banshees! 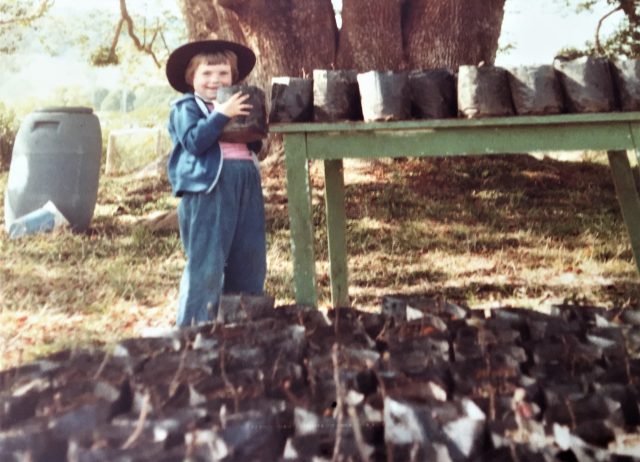 Helping with the kiwifruit plants 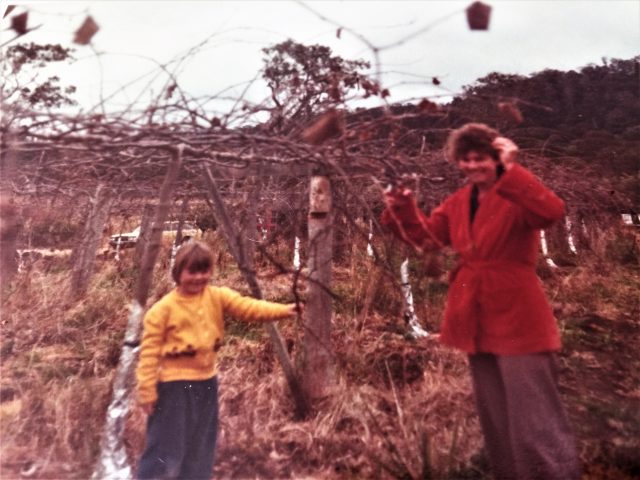 Helping with the kiwi fruit vines 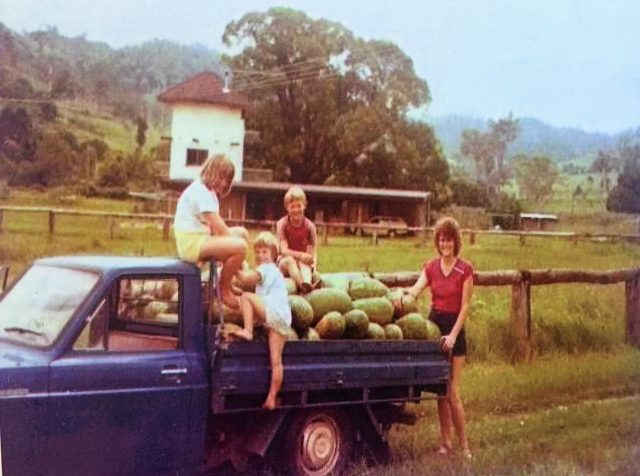 Aldy with her three children and a load of melons

We had to work hard on the farm, something not expected of many kids of this generation. But we weren’t wrapped in bubblewrap and played hard like only Aussie kids can. We would walk up to the old milk shed at the crossroads to catch the bus to school each day. When swim season began, we would walk up there to be collected by 6am. They were cold mornings and I remember lying on the bitumen road to warm myself up. Luckily there was never a car at that time of the morning or the body on the side of the road would’ve given them a fright! Dad also installed an old red telephone box for us to shelter in at the crossroads. We thought it was pretty funny when tourists would stop to use the phone and not find one in his box. There were always lots of laughs growing up in the Pocket, occasionally some tears when a rotten tomato was aimed perfectly at my head or my brother kicked up mud from his back wheel as we roamed the hills and paddocks on our little 120cc motorbikes… but now all I have is happy memories. I guess that is all any of us have of Baroon Pocket now, and they are blessings to be treasured and shared.

From 1977 to 1986 George and Aldy ran a mixed farm. Their primary crop was Kiwi Fruit but also grew tomatoes, beans, cauliflower, broccoli, peas and corn; and ran a small herd of beef cattle to supplement their income. Then, in 1986, the decision to finally build the dam was made and 12 properties were resumed, including Obiwater farm.  George and Aldy wanted to stay in the Pocket to farm and started to build a tourist/outdoor education centre facility. They were able to negotiate some land swaps with the Water Board and secured acreage above the dam that was made up of segments of Bob Rough’s and Frank Roberts original blocks. The farming here didn’t work out and in 1995 they aborted plans for a school camp/outdoor education centre and applied to Council to build cabins. ‘Secrets on the Lake’ was conceived. 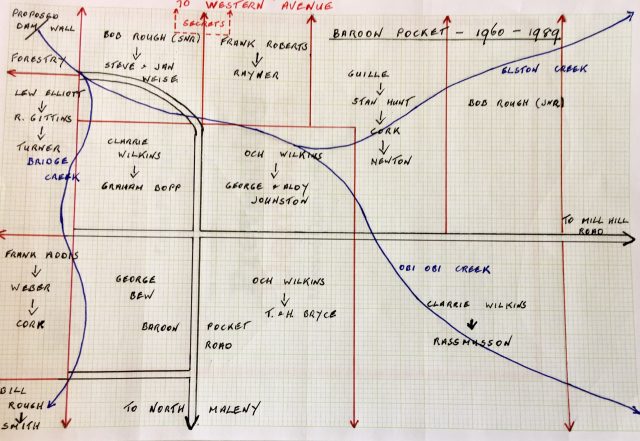 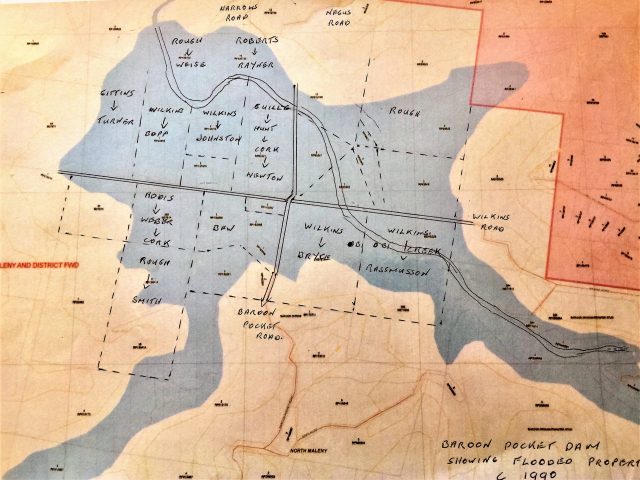 This story was the result of interviews with George and Aldy Johnston, material and photographs supplied by them and includes their daughter, Cath’s, memories of an idyllic childhood growing up in the pocket.