George Land and Jane Ann Bury – Pioneers, Landowners and Builders Extraordinary of the Near North Coast

What’s in a street name?  For some signage nothing of particular importance but for other streets the name represents a feast of history and provides a snapshot into the early settlement of that area.

Bury Street, Nambour runs off Currie Street and ends where the old Moreton Central Sugar Mill was once situated. Today it is the site of Coles Supermarket.  Bury Street was named in memory of George Land Bury one of the district pioneer settlers, landowners and builders. The image of George Bury (above) is taken from an excellent mural on a wall opposite the Nambour Council Chambers that depicts some of Nambour’s early pioneers.

George was born in Yorkshire, England in 1851 the son of George Butt and Sarah (nee Land) Bury. His father was a soldier in the 6th Dragoon Guards, and lost his life in the Crimean War.  George immigrated to Brisbane, Australia with his mother and sister in1869 in the sailing ship Light Brigade.

George was a ‘goer’ in today’s language. As a young man on the move, accompanied by his youthful bride Jane Ann they embarked on a full and successful life together.

In 1870, the year, after he arrived in Brisbane, George travelled to Nambour and selected land at Petrie Creek. He worked as a builder and erected the first sawn timber house for Mr. W. Samwell at Old Nambour. It was a six-roomed homestead on a ridge situated on his 1625 acre property which he’d selected in March 1870, to the west of Gympie Road, overlooking the Petrie’s Creek Valley. Namba was a successful cattle property, although the animals were sometimes disturbed by travelling Aborigines passing through in the bunya nut season, on their way up to Baroon Pocket. The land covered by this cattle-run has now become the residential areas of Burnside and Nambour Heights, stretching west as far as Highworth.

In 1880-81 George acquired land on the Mooloolah River, where he was a storekeeper, butcher shop proprietor and publican. During the late 1880s and 1890s George also selected land at various localities including Yandina, Palmwoods, Eumundi and Woombye.

During this period George and Jane resided at the Old Coach House (so-named as it was built in time to see the first Cobb and Co. Coach come through Mooloolah in November 1868.) The Bury family lived in this pit sawn timber home from 1878 to the early 1900s.

A son and two daughters were born to the couple before 1878. During their occupancy of the Old Coach house Jane gave birth to another seven children, from 1874 to 1892 – 2 daughters and 5 sons.

The pit sawn house stood on the corner of what is now known as Gympie Road and the Mooloolah Connection Road. In 1997, the house was removed to the Ewen Maddock Reserve and restored. It stands where the original Maddock home, Koongamoon, was built.

The Burys also owned several properties in Nambour, building a number of hotels in the town. He also constructed the Mooloolah and Maroochydore Hotels. In 1898 the Court House and stables at Woombye were relocated to Currie Street, Nambour, where a house he owned was rented as a police station.

In the late 1890’s the couple built a house on the site of the buildings at the corner of Currie and Mitchell Streets, which was then occupied by Dr. I. Charles. The family later moved into the Royal Hotel and then to their last home in Price Street, Nambour.

George and Jane retired in 1910 and in September 1923 they reached their Golden Wedding Anniversary. Family and friends gathered privately to celebrate this milestone but the public also wanted to pay tribute to this popular couple who had been beneficiaries to many public institutions including the Ambulance, the Maroochy District Hospital, the Show Society and the Churches. A committee was formed and a public function organized.

Eighty people attended the evening with catering supplied by Williams’ Cafe. Cr. W. H. Harvey, (chairman of the Maroochy Shire Council), as chairman, opened the proceedings. After the loyal toast Mr and Mrs Bury were then toasted with Mr Harvey detailing George’s work in establishing the Moreton Mill and honoured one who had served the district with his outstanding public service. He trusted Mr. and Mrs. Bury would ‘be spared to attain their diamond wedding celebrations ten years hence. Mr. A. Bennett (manager of the E. S. and A. Bank, Nambour while congratulating Mr. and Mrs. Bury, regretted that he had not heard mention of Mrs. Bury, whose assistance could be counted as a large factor in Mr. Bury’s success, and the efforts of the early pioneering days. Mrs. Whitecross, responding, eulogised and thanked Mrs. Bury for the many acts of kindness and good works rendered. Throughout the evening musical entertainment was provided.

On behalf of his wife and himself, Mr Bury thanked the speakers all very heartily for their good wishes and congratulations. Mr and Mrs Bury were each presented with  an umbrella and cane rocker. Mr. Bury expressed thanks on his and Mrs. Bury’s behalf.  Mr. P. M. Murtagh presented a box of cigars and a cigar holder to Mr. Bury from his fellow-directors of the Moreton Mill. The proceedings closed with- ‘Auld Lang Syne.’

During a director’s meeting of the Moreton Mill on the 28th February,1925, George, who had been in indifferent health for some time, collapsed and four days later, on the 3rd March passed away at the age of 74 years at his residence in Price Street, Nambour.

The funeral the next day, held at the Nambour Town Hall, was attended by many residents from all parts of the Near North Coast and flags were flown at half-mast from the Shire Council and other buildings.

Departing from the Town Hall the funeral procession proceeded to the cemetery. The cortege was headed by the Nambour Town Band, of which the late Mr. Bury was its first president, and also one of the first guarantors, followed by many employees of the Morton Central Mill and Maroochy Shire Council. Some forty-three motor cars followed the hearse, and behind them again were vehicles and a few horsemen. At the cemetery gates the Band formed a guard and played the ‘Dead March in Saul’. At the graveside some three hundred and fifty persons gathered.  The late George Land Bury leaves a widow, Mrs Jane Ann Bury and a family of six sons (two deceased), and four daughters. There are 53 grandchildren, and two great grandchildren.

THE DEATH OF JANE ANN BURY

Jane Ann Bury continued to live in the Price Street, Nambour residence after the death of her husband. She survived him by over eleven years, dying on the 24th August, 1936. She was 80 years of age and had achieved a full and rewarding life as a mother, beneficiary and charity worker. Her obituary of Friday, 28th August, 1936 which was published in the Nambour Chronicle wrote glowingly of her good works.

There was no public movement of a social and charitable nature that did not have as its ardent supporter Mrs G.L. Bury. Both her efforts and her financial aid were always disposed to assist any genuine request and many of the early settlers of the various localities in which the late Mrs Bury resided remember with gratitude her generosity and kindness. Her activities were found in all phases of charity and church work and she was also one of the earliest members of the Nambour Methodist Women’s Church Help Society in which she was keenly interested. In various ways the highest ideals of mother hood were characteristic of her life and her kindly disposed nature, together with her example had endeared her to her numerous acquaintances and friends. Until Saturday last she was able to converse with her family who were at her bedside when the end came. The last function connected with the Methodist Church which the late Mrs Bury attended was on the occasion of the dedication of the ‘Roberts’ memorial gates.

Jane Ann Bury is not mentioned in any publicized achievements relating to her husband, except for being recognized for her charity work at the couple’s 50th wedding celebration dinner and her obituary.

By all accounts the marriage of Jane Ann and George Land Bury was a happy and fulfilling union with George a man content with his life and without a doubt very fortunate with his life’s companion. From the little information gleaned from the few sources Jane Ann was a supportive loving wife and mother who complimented her very busy and ambitious husband in all aspects of their life together. Two lives well lived.

What a pity there isn’t a Nambour street named for Jane Bury. It would have completed a fitting memorial to a great pioneering couple.

Mr. Alfred Bury, third son of the late G. L. Bury, and Mrs. G. L. Bury, died at Nambour on July 16, aged 47 years. He was a native of Mooloolah, and after marrying a daughter of the late Mr. John Murtagh, of Dulong, followed  farming in that district at Dulong, but latterly had lived in Nambour, and  was in the employ of the Moreton Sugar Mill. His widow, four sons, and three daughters survive him. 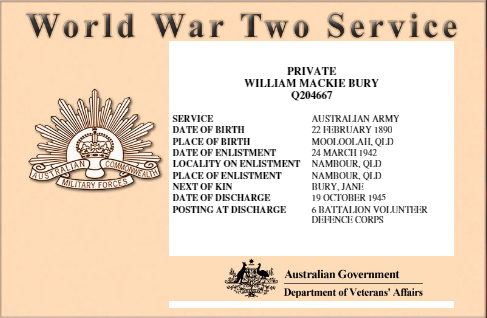 The First Settlers of Petrie Creek