When long term Montville resident, Les Gittins, told local historian and Montville Village Association President, Deb Davis, about getting into trouble for learning Italian better than English as a two- year old in 1944, she smelt a story.

Les’s parents, Reg and Molly Gittins, farmed Baroon Pocket, Montville for many years but it was on their earlier dairy farm carved out of the rainforest west of Conondale, that Les encountered the POWs who taught him Italian. Reg had applied to use Italian POWs as labourers on the farm. The deal was that he housed and fed them although they did receive rations of bedding, clothing, toiletries, preserved food and snacks from the army.

From 1944 to 1945, Antonio De Lycia, Antonio De Stefano, Vincenzo Guercia, Giovanni Crescenzi, Antonio Arru and Diomede Del Romano all worked on the Gittins’ farm in pairs. As a two year-old, Les doesn’t remember much about them but the family memories are of hard working, happy-go-lucky men who much preferred farm work to POW camps. Apparently, they were also fascinated about how Australian farmers used the axe as the universal farm tool. Molly was not impressed that Les’ Italian was better than his English so his contact with these sociable POWs was restricted.

Les Farmer, Tinned Peaches 2017, was a young teen and so remembers more about the Italian POWs on Montville farms. He remembers them as being regarded as good workers on Montville’s pineapple farms, good fellows who were story tellers and good singers. He recalls listening to their powerful tenor voices from his home as they drifted across the Montville night. He reflects that they moved through the community with freedom and weren’t seen as dangerous. They claimed to be reluctant soldiers who never supported Italy’s involvement in the war and celebrated the peace along with the locals. 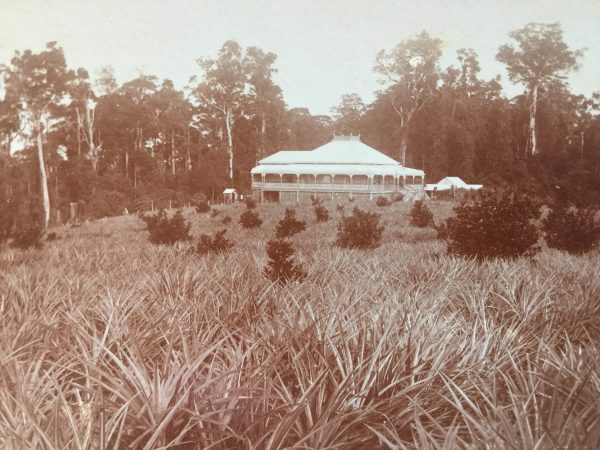 One issue of potential friction was that they received as rations things that locals could not get, like tinned peaches and chocolate. However, they traded these for fresh fruit like bananas and shared the sweets with the local kids. Farmers also received a ‘fuel ration’ to transport them to the nearest Catholic Churches which were in Nambour and Palmwoods. This was reputedly a very generous ration at a time when fuel was in short supply for civilian farmers so many were more than happy to take advantage of this.

The table below lists the Montville and Flaxton farmers who used Italian POWs between 1944 and 1945 as indentured labourers, and the names of the POWs themselves who were billeted on their farms. (Australian War Archives)

Italian POWS based in Montville and Flaxton 1944/45

The Montville Historical Group is keen to contact any descendants of either group to flesh out this intriguing but little-known war story that helped shape the community we have become. If you can help, please contact Cate Patterson at cate.patterson@jayb.com.au