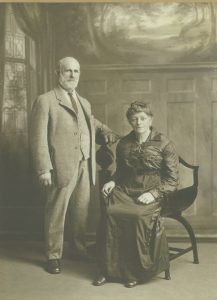 I remember Montville when the access road from Palmwoods was ‘The Old Road’.  We would travel by mail coach and later through The Cutting to Razorback, and around the Devil’s Elbow and Hunchy to reach Palmwoods to catch the Gympie train to Brisbane.  The coachman waited for the north bound train for mail and passengers.

Montville then had two guest houses – Manjalda and Elston – and later Mayfield.  Despite sometimes being flooded, and very slippery, our mailman could always be relied on to deliver the mail to the Post Office.  This road, dangerous and inadequate as it was, was a decided improvement for the residents.  When my grandparents selected and settled land in Montville, they had no roads and simply followed the ridges to reach their destination.  We all felt proud when ‘The New Road’ was opened, with its much improved gradients – albeit with horseshoe and hairpin bends!

The school and house probably remain much as they were then though the school paddock would not now cater for the ponies the lucky children rode.

Mr Smith’s shop (Alf’s to all) was opposite the school where one could always spend time and consideration on 1/2d and 1d lollies.  The School of Arts and Church of England were there and the Methodist Church, and a little nearer were the General Store and Post Office.  The library in the School of Arts was well patronised.

Montville then, as now, had a varied and interesting population.  The Progress Association was very active and concerts by gifted musicians, singers and comics were first class and enjoyed by all, as were dances, balls (some fancy dress), the occasional play, and travelling picture shows.

Cricket, football, tennis, and basketball were all available, and most residents enjoyed these either as players or on-lookers.  I remember Sunday School picnics – mostly to Maroochydore where parents made sure a good time was had by all.  There were school break up days, with picnic and races on the village green and prize giving in the hall. Every child received a book prize – the advantage of first selection for class books was given to the child who came first in class.  Our mothers provided veritable feasts on these and other public occasions.  Looking back, we who ran in the races could be deemed professional as first prize was 6d, second prize was 3d and third prize was 1d – mostly spent immediately at Alf’s shop!

After school, children would pick up mail from the Post Office for one’s own family and possibly several neighbours.  I can remember delivering mail to four families after school.

We as a family were particularly fortunate for our parents took us on frequent picnics to the Obi River or Bon Accord Falls (now named Kondalilla Falls).  I wonder if today’s residents know of and visit some of these idyllic spots.  The ones that readily come to mind are Thynne’s Pool in Baroon Pocket, the Beech Log, Isaac’s Pool (with a bat cave jutting into the pool), The Narrows and below them The Cliffs.  All these had swimming and fishing holes.  Between Thynne’s Pool and the Beech Log we sometimes came across an old gent who panned for gold and evidently found enough for his needs.  Also this was where, if one was lucky, we could see platypus.  We could swim through the Narrows if our father came with us, when we were young. I used to take a log for support because I wasn’t a strong swimmer and was the youngest member of our family.  Pulpit Rock, on private land at the end of Western Road, is also a wonderful vantage point for the outstanding scenery that is a feature of Montville.  Our father knew the forests well and we would make detours to view orchids in bloom, staghorns, etc.  There was also a beautiful flame tree – red amid the green of the forest.

My childhood memories would not be complete without mentioning rides around the Range.  The road to Maleny – across Balmoral – was surveyed but could only be used by riders.  The scenery was breathtaking.  We used to view the Glasshouse Mountains from Maleny, through Witta and home through Baroon Pocket.  Lovely memories!

Not to be forgotten were the mothers who helped develop Montville.  They baked their own bread (we were rather sorry when we had bread delivered – it was never as delicious as home made), we had meat twice a week, and there was huge laundry days using a wood burning copper, two rinsing tubs, a bluing tub and then starching, and of course the ironing with flat irons heated on the stove; later there were petrol irons and finally electric irons.  Kerosene lamps were the norm, evenings talking and laughing after dinner, playing cards and/or singing or ping pong.

I’m always grateful for the privilege of this upbringing, and was and still am appreciative of the sheer beauty of the Blackall Range.