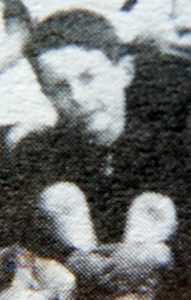 Richard Courtenay Haynes was born in Montville on 6 August 1918. Along with his sisters, Kathleen and Marjorie, “Sonny”  attended school in Montville from 1923 to 1930 and his family were strongly involved in both the school and the wider community. As an adult, writing as Richard Courtney, Rick Haynes recalled his boyhood in prose and verse.

“During my boyhood, the 40 km of dense rainforest beyond the scenic rim of the Blackall Range towns of Montville and Maleny, became my playground.”
Around 1928 Sonny Haynes met Burrendah, an Aboriginal man, down the Obi. Burrendah wore only possum skins and although he spoke only his own native tongue, he and Haynes were able to communicate. It is estimated that Burrendah was about 70 to 80 when he died in 1930. He would have been born around the late 1850s.
“Here in this uninhabited, but beautiful and incredibly rugged, wilderness area, bounded on the north by the tiny settlement of the Obi Obi, and on the south by the unique Thynne homestead, silos included, located in Baroon Pocket, below Maleny, Burrendah knew only two whites, Bulcock¹ and ‘the beardless boy’.
To get to know Burrendah cost me infinite patience, days and months of waiting, knowing I was always seen by the unseeable – finally he met me half way. I sincerely believe, as he said, he was the last of the Koolwanni, which means ‘people of the Black Swan’.
The poem, Burrendah identifies Burrendah as the last of his tribe left alone in this area. The others have moved inland but he remains from his youth to his old age and although he acknowledges the Obi Obi is now white man’s country he asks that his spirit be allowed to run free.
Haynes explains, “The expression, ‘The Old Man’s Eye also, in the language of the Chingali of the Northern Territory means ‘a sacred place’. ‘Gyark’ is a cry of frustration. ‘Kadook’ means lost in the spirit world, without rest.” 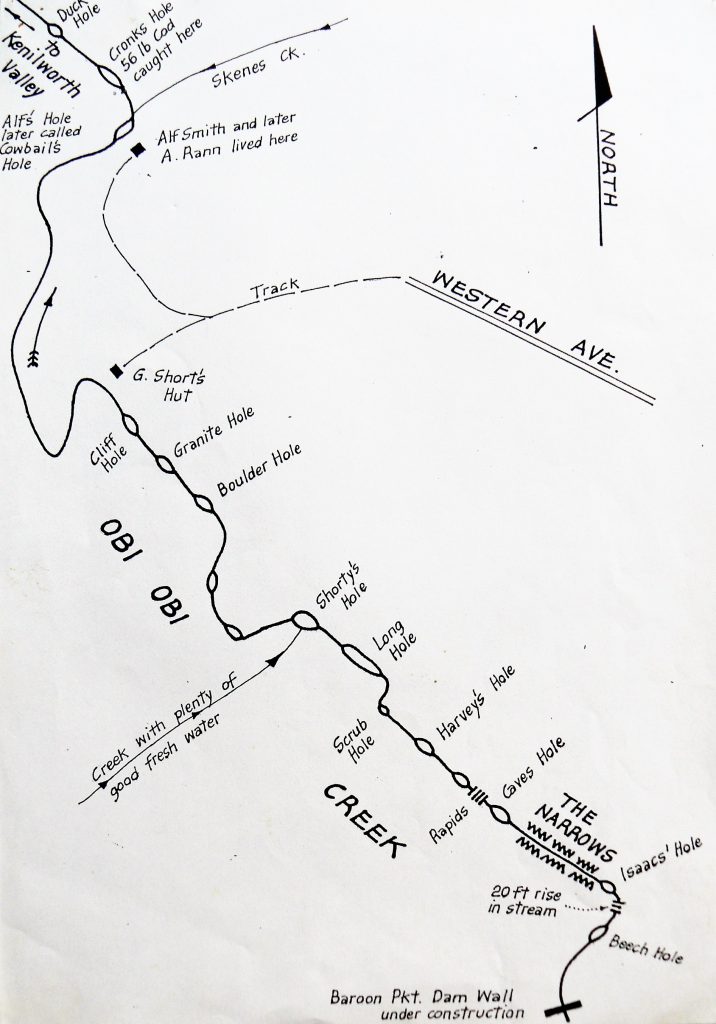 Haynes remembers the local names for the natural features; names such as The Narrows, The Great Longhole,Vinings Mountain, Kronks Hole (where it is said two white timbergetters from Kenilworth took a shot at Burrendah in 1920). Bindana (Thundering Waters) was the name Burrendah used for the falls on Skene Creek, first named ‘Bon Accord’ by the Skene family. Today these falls are known as the Kondalilla Falls (Laughing Waters).

There seems to be no way of corroborating Haynes’ story of Burrendah. Haynes intended to share his knowledge of aboriginal people with The University of Queensland, but there is no specific record of this. In an interview with Bill Harney, a noted authority on Aboriginal history, Haynes provided additional information about Burrendah.
Burrendah’s tribe had moved west, two others came back. In 1902, Secombe of Mapleton saw three natives with fish in the area. Although Haynes never saw Burrendah’s lubra, there is evidence to suggest he had had a partner.
On 14 July 1985 Aboriginal bones were found down the Obi, those of a female less than 150 cm tall. The bones were dated as being more than 100 years old. These bones were interred by Aboriginal Affairs. Aborigines of this area did not bury their dead. They were placed in trees and later the bones were shared amongst family members, with smaller bones carried around in specially made bags, worn round the neck and hung down the back. Larger bones were left in burial caves. The bones found in the Obi were a jaw bone and a tibia found in a cave upstream from the Narrows. Haynes says it had been Burrendah’s wish not to be buried, but left in his sacred place upstream past the Long Hole when he died in 1930.

Burrendah
Sculptured, unmoving – turned to stone,
Majestic splendour of young black man – alone.
Of the Koolwanni,
Burrendah.
Alone on Tarrawonga,
Soon to ring
With the axes of the white man’s coming.
He must look his last on Koolwanni
Dim and afar, the black swan’s beginning,
He must soon be gone from the plateau rim,
From the country of Tarrawonga.
Still Burrendah of the Koolwanni,
But going to stay forever in the valley beyond;
In the country of the Obi Obi.
There he remained till his beard was white,
Knew only Bulcock and his tiny gold strike.
“Gyark,gyark – I am still Burrendah –
Still Koolawanni”.
But his heart denied, as I said to him,
No old man, you are surely kadook,
You belong in the dream-time of the Koolwanni,
If you live you must live with the skins of white
Or you Burrendah are surely kadook
Here on the Obi Obi.

¹ The ‘Bulcock’ Burrendah referred to is believed to be Robert Bulcock, the husband of Emily Palmer. Burrendah showed Haynes the adit which Bulcock had driven some 40 ft into the mountain above the Great Longhole, near a large hoop pine. As Bulcock left the area in 1914, it would have been some time before this.