I am a grandson of Richard Proctor Remington, who was reputedly one of the first white settlers on ‘Razorback’ now Montville. My grandfather selected land at Palmwoods in 1883 before he selected land at Montville. (Remington’s home was called “Rose Hill” and he also built a timber mill). I was born there & lived on the property until 1952, when due to ill health I sold up and moved to my present home (Annerley) 34 years ago. I am now 83 years of age, my memory is becoming a little dimmed, but I still have a clear mind of what my parents told me of the events of those days.

My grandparents Remington arrived in Brisbane in 1878, and were held in quarantine for a month due to an outbreak of some disease on the ship. While in quarantine they lost a son aged 7 years; they were left with 3 sons, my late father was the youngest, Charles. After settling in Brisbane, they acquired land at Samford in 1879 and farmed there for about four years, then decided to move to Palmwoods.

Prior to the railway being opened, all goods were transported by sea through Maroochydore, to the rafting grounds at Eudlo Creek, where goods could be picked up by settlers. The nearest shop for goods and clothing was at the Remington property at “Rose Hill” where my grandmother Anne Remington opened a general store and post office. Mail was delivered by Cobb & Co. until the advent of the railway.

I think the nearest hospital was Brisbane. The first doctors I know of in the area were Dr A.S.Penny and Dr Malaher who practised in Nambour, but I think that was early 1900’s. I know of no dentists before 1910; then he used to visit twice a month at Nambour Hotel, 25¢ for an extraction. Or the local schoolmaster at Woombye, & that was Gratis!

(An account by a descendant of William Dart is rather more succinct, “Health matters needed some self-reliance.”)

The property selected in 1890 was 160 acres of Crown Land on the Montville-Maleny road, now known as “Belvedere”. An historical part of this property was known, and is shown on survey maps, as “Remington’s Shute”.   I know mill timber was the first priority and they used to cut and haul timber to the top of the Range, and catapult the logs onto the plateau below before being loaded onto bullock-wagons to Palmwoods. (the railway had extended to Landsborough, and on to Yandina by 1891) Later, strawberries, citrus & bananas were also grown on the property.   Grandfather built a small home on the Razorback block, of sawn timber with a shingle roof. It was located approximately 100 metres behind where the “Belvedere” house stands today.

Grandfather farmed the Montville property until about 1908, but I am not sure who he sold it to. I think people named Cullen or Downes acquired the property & as far as my memory goes one of them built the lovely old home “Belvedere”. He ran the property in conjunction with his Palmwoods property & frequently travelled the old track via Remington’s Shute with horse & slide. He operated the sawmill until about 1910, it was sold to Browns & Broad of Brisbane, but dismantled shortly after. He then settled his property on his three sons, my late father Charles having the Palmwoods property, my Uncle John had Samford, & my Uncle James took over property in Brisbane. My grandparents then retired to Caloundra. Grandfather died in 1918 aged 76, & my grandmother survived until 1931, when she passed away aged 90. 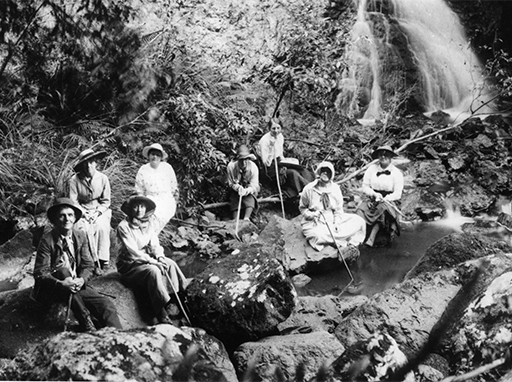 We used to walk from our Palmwoods home to Kondalilla Falls, then known as ‘Bon Accord’, for picnics, & also to Baroon Pocket where there was beautiful scrub and swimming holes. I have walked up to Montville via the Shute many times in my young life. It comes out on the present road at the bottom of the hill, between the homes of the late G.L.Brown & Harry Butt, roughly where Boongala Avenue is today.   As a boy of 17 or 18, my friends & I would travel by horseback to Montville for a Saturday night dance at the School of Arts. We would tie the horses near the hall, dance till 3 am, and then ride home to Rose Hill. (Just in time for the milking!)   SR.