A MAN OF GOD AND COMMUNITY

Jim Hooper was born in 1928 in  Somerset, England the son of Frank and Mary Hooper. He was one of ten children born on the family dairy farm near Cheddar, an area famous for cheese making. A foot and mouth outbreak in the middle of the depression made his boyhood extremely tough. All their animals had to be slaughtered and only government compensation kept the family alive. He wanted to learn the trade of blacksmithing but was needed to help his father on the farm, now growing wheat as directed by the war cabinet. Throughout the 40s, he worked on the family farm and took on casual work in the district, saving his money to buy tools and equipment like his first small welder. In 1952, he applied for the £10 assisted passage to Australia. When he didn’t receive any response, he contacted a shipping company that advised him there was a 3-year waiting list. A week later he scored a cancellation and was on his way; but it was a first-class berth at a cost of £180. This made a huge hole in his savings but he wrote that he thoroughly enjoyed the luxury and the 7 course meals at the “Captain’s Table”. It also meant that he could bring his tools and equipment with him. 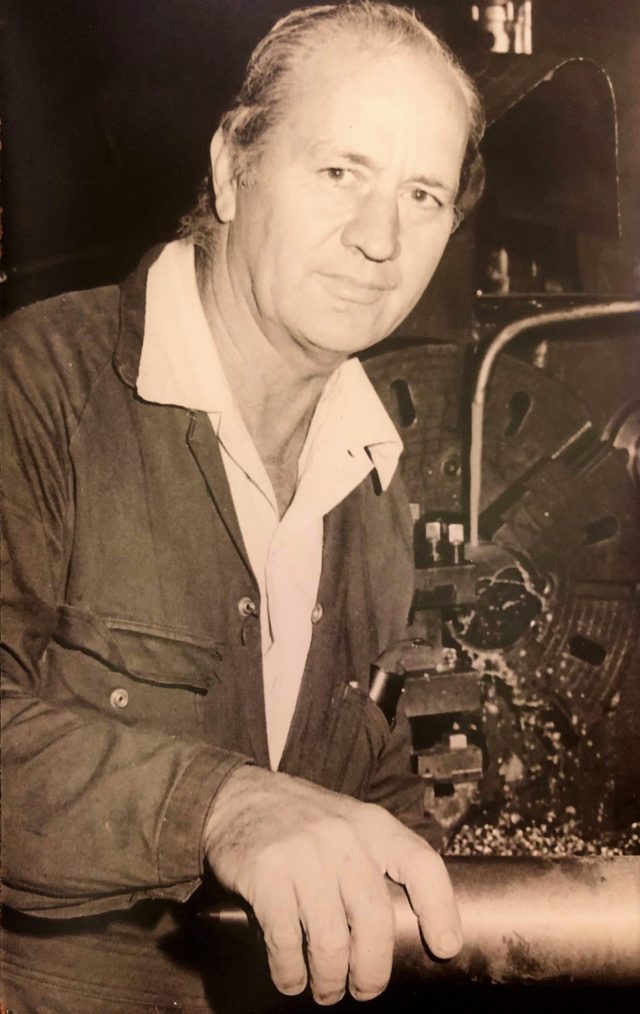 Jim always seemed to have a tool in his hand, an idea in his head

On the voyage he met and befriended George Morris, returning from Sudan where he had served as a missionary. George converted Jim to Christianity and offered him a job on the family’s dairy farm at Gayndah, Queensland. There he met his wife-to-be, George’s sister, Joan. He spent the next 4 years working on the Morris farm and on a number of cattle properties in western Queensland, learning how to farm in Queensland’s hot, dry conditions. He claimed later that these experiences made him a much wiser man and allowed him to establish a network of contacts throughout western Queensland which became useful when he later established his Montville engineering business.

Jim married Joan outside Gayndah in 1956 and a year later bought an established pineapple farm on Balmoral Road, Montville, which he named Tutnell after his family farm in Somerset. Tutnell is Saxon for Top-of-the-hill which is where his new farm was. He applied his blacksmithing skills to design and make carryalls, a system attached to the back of the tractor to carry harvested pineapples. Jim realised he was more a blacksmith than a farmer and in 1958, build a workshop at the front of the farm right on the road; Hooper’s Engineering was born. For the next 60 years, Hooper’s Engineering supplied metal fabricated machinery and equipment to farms, properties, mines and mills all over the world; starting with re-conditioned windmills to huge ploughs, scrapers and buckets. As the machinery got bigger, the welders, presses, lathes and forges also got bigger and the foundry grew to accommodate them.

Jim quickly became involved in the Montville Community. Within days of his arrival a serious bush fire broke out. Jim realised that Montville did not have a Bush Fire Brigade and set about rectifying this omission. He helped form this service and served it for 25 years as First Officer and 37 years as Fire Warden. He also served as Secretary of the Montville Progress and Fruit Growers Association; an early community body that much later became the Montville Village Association. While in that position he fought for better roads and a new telephone exchange. As well, Jim served Montville as a JP for many years.

Jim was a very committed Christian. He was secretary of the Montville Methodist and Uniting Churches and a lay preacher for 32 years and a Chaplin for Gideon’s International. He served as a missionary in Papua New Guinea on ten different two-month tours where he built airstrips, aircraft hangars, and community infrastructure and spread the word of God. In later life, Jim joined the Nambour Baptist Church. He was a hands-on, practicing churchman who prayed daily and visited members of the community regularly.

Jim’s world centred on his God, his family, his community and his business and he served them all well. He passed away in 2020.