The new owner of the Flaxton mill, Hamilton Sawmills, already owned the Mapleton mill and had previously built the Conondale mill in the Mary Valley. Conondale mill was purpose built to cut the bridge timbers for use in the construction of the Hornibrook Highway connecting Redcliffe with Clontarf. The 2.864-kilometre viaduct was, at the time, the longest bridge in the southern hemisphere and the second longest in the world. It opened to traffic in 1935 and its construction provided much needed jobs during the depression years. Hornibrook and his brothers expanded their engineering and construction company and they used their three Blackall Range sawmills to supply their ever-increasing demand for sawn timber.

Some of the Hornibrook company achievements include the excavation of Queensland’s first open-cut coal mine at Blair Athol; major drainage and water supply works throughout the state and construction of over 100 bridges including William Jolly and Storey bridges spanning the Brisbane River. One of Hornibrook’s companies completed the superstructure of the sail-like roof of the Sydney opera house.

After a successful and distinguished career, Manuel Hornibrook was appointed Order of the British Empire in 1957 and elevated to a knighthood in 1960. But we knew him before that when he visited the Flaxton mill on several occasions and since he had kept Dad on as mill manager, he sometimes stayed at our house. He once gave me a ten-shilling note, a lot of money for a child. I had never handled anything more than a two-shilling piece before then.

Hornibrook was no stranger to the Blackall Range. His father once owned a farm in the Obi Obi valley and he spent some of his early school years there. My brother, Harold, had a contract to haul logs in the Obi Obi valley and one day when it began to pour rain, he took refuge in the abandoned school house. He filled in time examining some of the remaining relics, reminiscent of his own school days in Flaxton, when he chanced upon the “Register of Corporal Punishment.” He found Manuel Hornibrook’s name listed along with the other miscreants of bygone days.

Hamilton Sawmills Manager, Albert Porter, who lived in Enoggera in Brisbane, regularly called at Mapleton, Flaxton and Conondale mills and sometimes stayed overnight at our house. On these occasions, Albert, or ‘Granny’ as he was known, gave me a lift to school the next day. On the front seat beside him, a leather holster housed a .410 pistol. He sometimes carried significant amounts of money to pay the mill workers and the pistol, he said, “Is just in case some fool tries to hold me up.” Thankfully he never had occasion to use it.

The timber for at least two historic projects was sourced from the Flaxton mill. The flooring for ‘Cloudland,’ once an iconic Brisbane dance hall, over which thousands of feet shuffled and stomped, was cut at the Flaxton mill. Cloudland opened to the public in 1940 and in 1942, the United States military took it over to use as their headquarters. It reopened as a ballroom in 1947 and was controversially demolished in 1982. 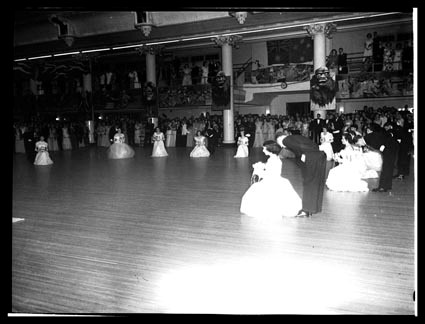 The Flaxton mill again achieved prominence during WW2 when the Dutch Government ordered a large quantity of timber suitable for building landing barges. Brown pine (Podocarpus grayae), one of the few timbers resistant to salt-water borers, was considered suitable. A large stand of these trees grew in an almost inaccessible area below the steep rocky slopes over the western side of the range. The brown pine trees had only survived the timber cutter’s axe because of the difficulty in bringing them up the mountainside and thence to the sawmill. Dad solved the problem when he purchased an ancient but reliable O.M. (Officine Meccaniche), a solid rubber tyred, chain driven truck fitted with a ship’s winch with a long length of one-inch (25mm.) wire rope wound on the capstan. With lots of patience and manpower the men winched up enough brown pine logs to fill the Dutch Government’s order. The story of the winding gear they used is interesting:

A sawmill at Bellthorpe, situated on top of the southern end of Conondale Range, had no further use for what they called, a winding gear. Dad travelled there and bought it for the brown pine project. This ancient, heavy, lumbering solid tyred machine, designed exclusively for work, had a top rate speed of about 18 miles per hour (29 kilometres per hour). Dad drove the noisy, slow and extremely rough vehicle from Bellthorpe to the mill at Flaxton. To do this he had firstly to descend a very narrow, winding dirt road, a heart-stopping ask in anyone’s book.  Once off the range the roads improved but the vehicle was so heavy and rough and slow, he drove either right off the side of the road or as far to the left as possible. After two days of tedious driving and the ascent of the Blackall Range he arrived home shaken and half deaf. His trip had not been entirely uneventful.

The army occupied an installation at Landsborough and when Dad and the winding gear roared ever so slowly past, some of their communication cables became entangled in the rear wheels. The men in uniform yelled for him to stop but he could not hear them. They found they could outrun the peculiar machine and this is how they got him to stop. Dad told that story over and over.

Ancient it may have been but the winding gear did a mighty job once it roared into action. Starting it could be stressful and I think because of this old machine I learned to swear at an early age. To start it, each of the four cylinders had first to be primed with petrol. Because it had no battery, just magneto ignition, it could only be started by cranking manually.  If, after half a dozen attempts it failed to start, swearing usually fixed the problem, the worse the swearing, the more likely it was to start. At least that’s how I figured it.

My brother, David, my father, Ray, and Stan Callaghan, a Montville man, and another employee, Jimmy Valet, slaved away for days in some of the steepest country imaginable until they gradually hauled up all the brown pine logs with the winding gear, block and tackle and wire rope. This was a huge undertaking and I am informed that the Department of Forestry took photos of the operation and put them on display at their booth at the Brisbane Exhibition.

Flaxton sawmill filled the Dutch government’s order and shortly after, my brothers David and Harold tendered to supply 60 foot (18 metre), pylons for the Brisbane wharves. The pylons had also to be resistant to saltwater borers and for this they selected turpentine (Syncarpia glomulifera), which grew tall and straight on Dad’s bush block. Their tender was accepted and the order filled.

One other project is worth mentioning. Red bean (Dysoxylum mollissimum), grew sparingly in Flaxton forests but most specimens were unsuitable for milling. One red bean tree that was suitable grew fairly close to the mill. Hamilton Sawmills manager, Albert Porter, said he would buy all the timber it produced if they cared to process it in the mill. Stan Callaghan fell the tree and when it was run through the saws it produced beautiful, heavy, deep red timber. Mr Porter had the sawn timber planed and polished and used it to line some of the interior of his Enoggera home. Those who saw the finished product say it was a truly spectacular sight.

Part 5 (War Years in Flaxton, 1940) continues the story of Sawdust and Steam