If any of the ex-WW1 servicemen cum sawmillers were still alive today and we asked them their finest achievement whilst working at the Flaxton sawmill, they would almost certainly say, milling the logs to provide the timber to build the Montville R.S.L. hall. These three men put a number of logs, which had been donated for the purpose, through the Flaxton mill saws during their free time on weekends. Like errant schoolboys, it seems they purposely forgot to inform Hamilton Sawmills that they had “borrowed” their sawmill. Two of these men, Ray Plowman and Roy Copeland, served as trustees for the Montville R.S.L. The project had extra significance for our family because my sister Patricia Plowman served in the Australian Women’s Army Service (AWAS) and her name appears on the honour board in Montville.

Despite the anxiety and fluctuating fortunes of the war, the labour shortages and the rationing of food and petrol, the old steam plant at Flaxton and the men who worked there, kept this essential industry in production. The Flaxton community remained strong. They frequently met in the one-roomed school house to say farewell to departing servicemen and women and once again to welcome each one home. Concerts and dances and community singing helped weld us all together. For our family and many of the sawmill employees, an excursion to the beautiful and then unspoilt Bon Accord Falls provided a welcome diversion both from the grind of daily routine and from the added worry of wartime distress.

The boundary of Dad’s bush block extended almost to the base of Bon Accord Falls, a magnificent rock pool and waterfall within some of the most beautiful scrub country imaginable. Renamed Kondalilla Falls in more recent times, thousands of tourists now visit there each year via carefully maintained walking tracks. In the 1940’s, few people knew of the existence of Bon Accord and fewer still braved the rough and steep terrain, the leeches and the prickly lawyer vines to make the visit. Bushwalkers from Montville guest houses were an exception. They made the ‘pilgrimage’ to Pulpit Rock, a prominent rocky buttress forming the southern rampart of Bon Accord. Pulpit Rock looks out and presides over one of nature’s finest ‘cathedrals’. An article in The ‘Brisbane Courier’ of December, 1928, paints the scene perfectly:

“Another fine view that, alas, is too little known is to be seen from what is known as Pulpit Rock at the back of Montville. From this rock one looks down a precipice into the Bon Accord gorge, full of the most wonderful scrub, which also covers the steep hills on the opposite side. the Queenslander rightly describes this gorge with its thousands of beautiful palms as a “fairy land.”  To the lover of nature there can be no better treat than to follow the beautiful stream down to the Obi River, and to rest awhile on sandy beaches  sheltered by great pine and other fine trees and palms, whilst one catches a glimpse of the rare Regent Bird and Rifle Birds, or various noisy parrots or cockatoos or sometimes the beautiful Pitta or Dragon Bird is to be encountered amongst the denser vegetation. The giant green and black Ornithoptera butterfly hovers above the stream.” 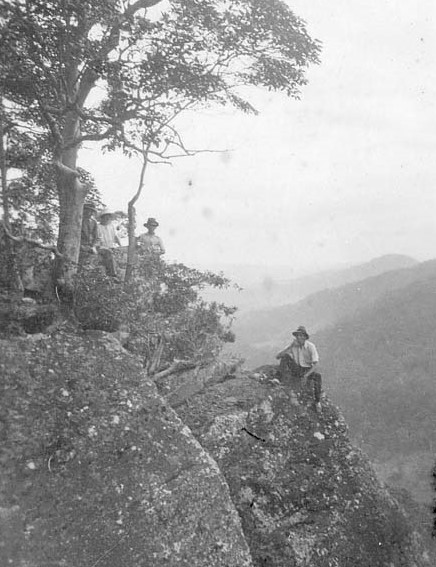 Cleared walking tracks now provide easy access for thousands of visitors and the use of concrete, fencing, barriers and signage has changed forever the once pristine sanctuary of Bon Accord. Similarly, the logging of Flaxton forest has led to the destruction of much of the natural habitat. Although it did not mean much to me when I lived there as a child, I look back now with some regret. I remember seeing huge trees come crashing to the ground, some with beautiful orchids, staghorn, elkhorns, ferns, a possum’s nest or a wild bee hive, all dwelling within its leafy abode and all probably destined now to die. Logging of forests is and always was a balancing act between conservation and necessity. A walk through the heavily logged parts of Flaxton forest where stark, white, dead tree stumps stand as ghostly reminders of a once living and green garden of Eden which we destroyed, suggests that perhaps we did not get the balance quite right.

Every cloud, they say, has a silver lining, and the end of WW2 heralded in a new era of change. Electric motors and diesel engines rapidly replaced steam installations throughout industry and the Flaxton mill was no exception. Flaxton residents watched and waited as poles and wires spread out across the district bringing, for the first time, the convenience of a reticulated electricity supply. Aerial cables extended as far as the Flaxton sawmill site where a transformer stood ready to supply electrical energy in place of steam power. The boiler and steam engine which had kept the sawmill running for over a decade, was now destined for the scrap heap.

Electrical contractors, Kennedy and Middleton, arrived on site to install a brush-lifting electric motor in place of the steam engine. The change over from steam to electricity took only a short while. The sawmill could now stop and start with the flick of a switch. The year was 1948.

The Flaxton sawmill had now entered the modern age but its hey-day of steam would be long remembered: The days long gone when Stan Callaghan manned the breaking down saw; Jimmy Valet and Sunny Taylor on the number one bench; Ray Plowman on boiler and docking saw; Eric and Reg Jones bringing in loads of logs to feed the hungry saws; my brothers David and Harold loading sawn timber on to a truck and calling out the sizes to be checked off; the gentle hiss of steam and the melancholy sound of the old steam whistle sounding the call from refreshment to labour, remain for a lifetime as nostalgic and pleasant memories.

The electrification of the sawmill corresponded with another modern innovation which revolutionised logging everywhere: the chain saw. Bulky early versions required two men to operate but these labour and time saving machines replaced cross-cut saw use virtually overnight. Later development of the one-man chainsaw ushered in an even faster and easier way to fall trees and in doing so, rendered unnecessary the jobs of thousands of axemen and forest workers.

All industries progress with the times in the quest for faster and more efficient means of production. Electrification and the adoption of modern forestry techniques allowed the Flaxton sawmill to continue operation until 1963 when it was destroyed by fire. Nearly all the hundreds of small sawmills similar to the one at Flaxton and most of the old-fashioned larger mills have now disappeared, victims of diminishing forest resources and the introduction of automation so necessary in this highly competitive age.

In its 27 years of operation the Flaxton sawmill filled some historic orders for sawn timber. More importantly, it provided much needed employment for many a family man during the tough years of the 1930’s and the 1940’s. In a small way it helped Sir Manuel Hornibrook expand his construction empire and contributed its bit to the development of our wonderful State of Queensland. Above all, the Flaxton sawmill helped to define a way of life and a proud heritage for those who lived there through those years.

History is soon forgotten and in the grand scheme of things, Flaxton’s sawmill might seem insignificant. But that tiny enterprise tucked away in the lonely but beautiful Flaxton forest contributed in many ways to our society and deserves to be remembered. A number of families and our world at large would have been worse off without it.