Sometimes Dreams do come True – The Inside Story of the Deck

It must have been ten years ago that I first heard the need for a deck on the eastern side of the hall being discussed. I was the new treasurer of the MVA at the time and was wandering around at the end of another successful market collecting the takings to bank. A group of hot, sweaty, exhausted women (Deb, Paula, Ali, Frith and Leanne, I think) were washing up (pre dishwasher days) and talking along the lines of “wouldn’t it be great if we could build a deck out here” – gesturing to the garden of stone lined garden beds on the eastern side of the hall. I knew how much money we had and thought it was a lovely, but unlikely, dream.

We spent the next several years upgrading the kitchen to better service the markets and other community events, eventually getting it compliant for a commercial kitchen licence. There was still no money for a deck but the dream had taken on a life of its own. Maybe not every market but perhaps every second or third market you could hear a wishful voice saying “wouldn’t it be nice if ….”. Then, as we began to offer a greater range of community events – concerts like “The Spooky Men’s Chorale”; community dinners; trivia nights – and filled the hall to over-flowing at night, new voices joined the chorus.

Deb and I, when we shared the president/vice-president roles, occasionally discussed how we could get a deck, but more with optimism than any sense of strategy. So, I was caught by surprise in 2017 when Deb, a grin from ear to ear, pulled me aside before a meeting to listen to Diana’s proposal. Diana had been looking for a worthy community project to support and, a couple of years earlier, had made an expression of interest to help fund a solar farm on the sports ground should it prove viable. Unfortunately, it wasn’t. Now, Diana expressed an interest in funding a new deck to the tune of $100,000. She knew it wouldn’t be enough for the whole project but hoped we could get grants and other community donations to finish the job. Needless to say, we were so excited we couldn’t wait.

We approached David Gole, international heritage architect and long time MVA member, to see if he would design the deck and handle all the red tape in getting it approved – which meant satisfying very stringent conditions that applied to such work on heritage listed buildings like ours. David agreed – and offered to do the work on a pro bono basis – which meant a huge saving. We invited Ruth, as Hall Coordinator, to join us in a small committee to work with David to get conceptual drawings ready for the approval of Diana and the Management Committee of the MVA. At the same time, we gave David a short list of local builders who had established a successful relationship with the MVA, making the point that we had a policy of using local people when we could. David indicated that he had worked with Ross Sinclair on a number of local projects on the range and that they had a good work history. Ross was his builder of choice and we were happy to accept this. (In retrospect, this proved to be an error of judgement on our part.)

David produced some very exciting concept drawings which were accepted by Diana and the MVA and based on these, completed detailed engineering drawings for Ross to prepare a quote. With everything progressing relatively smoothly, I took off to spend three months travelling through the central Australian deserts with Cate, leaving Deb in the lurch with a mess to clean up as it turned out. The cost of the project was far more than we could expect to meet. On top of that, there was considerable community unrest that we had not initially called for competitive quotes. David went back to the drawing boards to try and reduce costs and the MVA invited interested builders to quote on the job. At the same time, John Muller, who had by then joined the Management Committee and who had extensive experience in the building industry, agreed to take on the role of Project Manager. Rod Nash, who had done a number of jobs for the MVA over the years, won the tender for the hall.  Along with another long term MVA member, carpenter Howard Michel, and under the management of John, the deck finally became a reality. 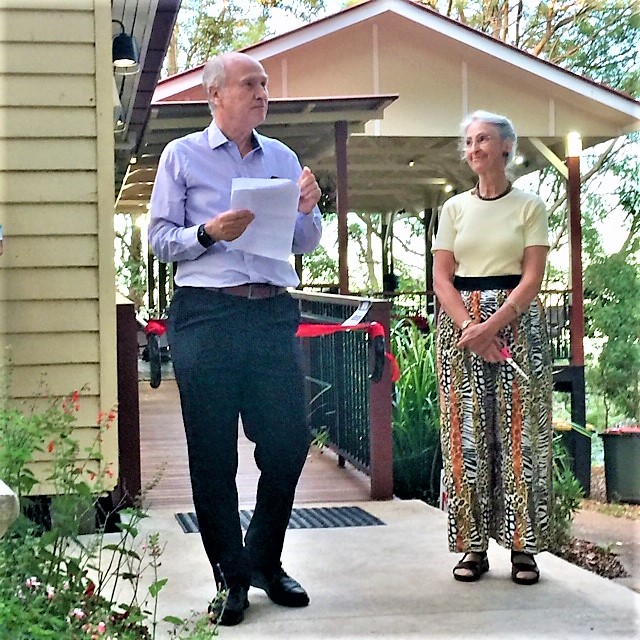 Dr Diana O’Connor about to cut the ribbon of the newly opened Montville Hall Deck with Michael Bradley, President, MVA.

We did get grant money from the Council and we did get community donations, but not enough. Diana stepped in to make up the shortfall and to ensure there were funds to re-develop the garden below it. Deb and I had talked about a possible opening that honoured the role that Italian POWs had played as farm labourers on the range during WW2 – something like a ‘pizza, pasta and plonk’ night. The failure of the pizza oven and Covid restrictions meant a different opening was called for. Tapas and Sangria proved a great alternative, but it did raise questions about what exactly we can and can’t do in catering for community functions – from home and in our kitchen. It also highlighted the need to upgrade our stove and oven.

Like, I suspect, many others, I have wandered on to the deck in a quiet time to just enjoy that facility and the view. It really is great to have a deck – and to know that sometimes dreams do come true.