Stories from the Montville Sports and Recreation Grounds

It would seem that the Montville Cricket Team disbanded in 1975/6. Unfortunately, we have been unable to trace the official documents of the club or its scorebooks and trophies. These stories have been gleaned from MHG records, newspaper reports and interviews with surviving players – some in their 90s. Warwick Jeffs was the last president of the club but the last secretary is unknown. If we could track down these records, we could do a fuller history of one of Montville’s historic sporting and social clubs. Unfortunately, we have no photos of Montville Cricket in action.

The Chronicle and North Coast Advertiser gives us a glimpse into the early days of cricket in Montville. It would appear to be mainly social cricket with, at times, a very local bent. It reported that, on the King’s Birthday Holiday in 1903, the ‘young fellows’ challenged the ‘married men’ to a game on the ‘Village Green’, with the young fellows winning by 65 runs and 3 wickets. A later story from 1911 reports on a Ladies versus the Gents game, suggested by Lil Bowser, where the Ladies won convincingly. The game was played with the addition of several local rules. The ‘Gents’ had to bat with 1 hand – the left, had to bowl underarm, and had to field with 1 hand. The highlight of the day was a mighty six hit by Miss R. Dart. There was a more serious Montville Cricket Team because there was an announcement of the local (Montville) cricket team holding a prize night that was to include a concert and dance in the School of Arts Hall in 1906.

The Montville Sports and Recreation Grounds was established in 1925. The land was purchased for £500 from J.J. Thomas. A further £500 was spent on building two tennis courts, and a football field/cricket oval. Ten locals guaranteed the loan and five trustees were appointed to manage the grounds. Admission was set at 2 shillings. (20 cents)

Up until 1925, the Montville Reserve Cricket Team claimed Palmwoods as its home ground. The Chronicle and North Coast Advertiser records a decisive victory Montville had over Nambour at Palmwoods in 1922. Nambour was all out for 40 in its first innings, H. Goodwin, Montville’s best ‘trundler’, taking 9 for 18 for Montville. Montville made 58, Goodwin top scoring for the home side. Nambour tried to force a win through an early declaration of 4 for 68 but Montville ran down the necessary runs without losing a wicket. This first recorded Montville team included: R.N. Ross; S. Smith; S. Bray; T. H. Brown (Captain); H. Goodwin; G. Butt; J.J. Thomas; J. Woof; G. Short; S. Smith; J. Aird. (The team called their captain Gregory – perhaps a reference to a cricket personality of the time).

By the 1930s, Allan Brown; Lowry Smith; Ken Smith; Evan Williams; Norm Aird; and John Aird had joined the team but cricket was interrupted by WW2.

During one of our home games, the cloud rolled in and the game became obscured for the scorers. The ball by ball action was called by the fieldsman closest to them. Terry Glover, son of Artie, was not a cricketer but grew up next to the sports ground and was a confessed supporter and hanger-on. He recalls joining a group of youngsters every Saturday morning before a game to pick up the cowpats. (Dairy farmer, West-Newman, whose farm bordered the sports ground on its southern side, ran his herd over the oval to keep the grass down.) He also tells that the boys often had to chase/find balls hit over the boundary and off the grounds. Occasionally, he says he was co-opted to make up numbers for the fielding side and claims that he once took a catch.

New players to the team in the 1960s were Peter Glover; Bruce Moll; John Fuller; Hilary Brown; John Baskett; Martin Costello; Barry Butt; Rob Nichols and David Nichols. Montville were Premiers in 1962. By now, Mapleton sport had declined and the success of the Montville team was attracting players from Flaxton and Mapleton as well. One was a teenage quick, Rob Nichols, whose best figures included 10 for 66 against Eudlo and 9 for 13 against Maroochydore. (Apparently it could have been 9 for 3 but their number 11 snicked 10 runs (2x4s and a 2) in the last over.

By the late 60s to early 70s, Montville Cricket boasted 2 teams. New players included Ross Sinclair; Gerard Costello; Robert Brooke; David Farmer; Rodney Oates; Russell Guppy; Ronald Guppy; Shane Paulger; Richard Barnett; Thomas Roth; Daniel Roth; Chris Roth; Warwick Jeffs; Tony Fuller; Paul McCulloch; Lance Bedkober; John Williamson; Paul Cass; Joe Love. David Farmer kept up the successful record of our quicks with best figures of 9 for 15 against Nambour while 10 year- old Richard Barnett picked up 5 for 4 in his first game with the team. Although there was some lantana, raspberry cane and privet growing on the road side of the oval, any ball hit on to the road rolled rapidly down the road and over the edge and off the Range towards Chenrezig.

In 1975, twins, Daniel and Thomas Roth, joined the team. Their parents had Flaxton Barn and built a practice cricket net behind the barn where many of the team trained. The boys shared a VW Beetle and drove younger players with them to games. During a home game, Thomas hit a ball down to fine leg and the fielder signaled 4. Thomas and Richard stopped running and stood talking in the middle of the wicket. The fielder threw the ball to the keeper who ripped off the bails and appealed. It turned out the ball had not reached the boundary and Thomas was eventually given out. Incensed by such a blatant act of cheating, twin Daniel jumped into the VW and took after the offending fieldsman, chasing him around and off the field.

Cricket was played at Montville for over 70 years from the 1900s to the 1970s. When the oval was converted into a soccer field, the old concrete wicket was dug up – no longer used and in the way of the refurbished ground. The tin shed may be gone and the stories are fading but the game of cricket remains an important legacy for a village with no pub. It helped build the community we live in today. 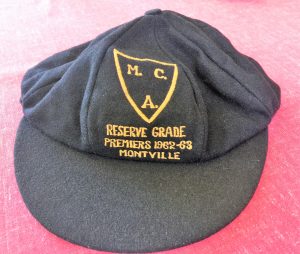