The Bark Hut by the Side of the Road

The golden glow of evening invokes memories from the past and sometimes, when the mood is right, our minds take us back to be with friends from days of long ago.

Though every remnant of it has long since disappeared, I remember the bark hut beside the road where a stolid working man, possessed of many skills, plied his crafts. I was very young when I came to know Bill Cotterell, and I remember going inside his humble home only a couple of times, but permit me to tell you what I know of this remarkable man and his dwelling place.

At first sight a bark hut seems unworthy of praise as a place to live but look a little closer and you could be surprised. A properly built bark hut effectively protects its occupants from rain, wind and cold and maintains its integrity even in the snow. Tens of thousands of pioneering parents raised large families in homes constructed of nothing more than saplings and bark, the readily available materials harvested from the Australian bush. Saplings are easily cut and prepared to build the framework. Bark requires more effort and expertise to properly utilise. A gold miner in 1888 had this to say:

“The method of barking the tree is to ring it at the butt, and again eight or nine feet above, then split it down from one girdle to the other, get the fingers in and start it from the wood. When once started, it will readily peel around the body of the tree and come off in one whole sheet, eight feet long and from three to six feet wide.”

In the photo you can see where a sheet of bark has been stripped from the tree to the right of the image. 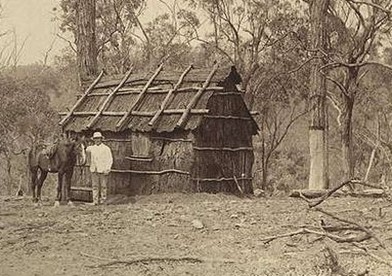 An article written way back in 1826, gave this advice about building with bark:

“Care is taken to give the different sheets sufficient overlap to allow for their shrinkage, and also give the eaves sufficient projection to carry the rain water from the walls.”

In the absence of wire or twine to tie the components together, the same article suggests the builder should use the strips of the inner bark of the stringy-bark tree. Our pioneers certainly were resourceful!

Saplings criss-crossing the bark roof and tied into place, secure it against wind and storm.

Bill’s hut had one ‘window’ made from bark attached to a wooden frame. It hinged on thick strips of greenhide and could be propped open with a thin wooden slat. A close-fitting door, homemade of course, kept out the creepy crawlers most of the time, the exceptions being lizards and tarantulas which seemed able to squeeze through the slightest of openings. He replaced the open hearth with a wood burning cooking stove which afforded excellent cooking facilities with greatly reduced risk of fire.

The floor of compacted earth had one refinement, a square of lino near Bill’s old iron bedstead. Dirt floors were not uncommon and when swept with a millet broom, were as spotlessly clean as any wooden surface.

Limited internal space called for innovative storage ideas. Pots, pans, pannikins, water bag, food safe and hurricane lantern all hung on stiff wire hooks from the saplings supporting the roof. On shelves near the stove recess were arranged the cooking essentials of salt, sugar tea, curry powder and, as one of the necessities of the day, a container, of dripping. Dripping was for many years the medium in which everything that needed to be fried, was fried.

Bill’s bark hut sat beside the road directly opposite the Flaxton sawmill. He worked as a sleeper cutter, sourcing suitable sleeper timber from within the Flaxton Forestry Reserve. Unlike other sleeper cutters who worked in pairs or in teams, Bill worked alone. Usually a two-man job, he expertly wielded the cross-cut saw by himself. With axe and wedges and cross-cut saw he felled the trees, cut the logs to length, split the billets then, with adze and broad axe, dressed each rough billet to the exacting specifications demanded by the Queensland Government Railway. The broad axe and adze are the tools of a long past era, but it is a joy to watch those few bushmen who still use them to keep the old traditions alive.

The hard physical labour involved in sleeper cutting kept Bill fit and strong so he could indulge one of his many other pursuits, the wood chop. He would travel far and wide with his razor-sharp axe to compete. This well-known, grand old man of the wood chop was still competing when he was well into his sixties. The Courier Mail once described him as, “The grandfather of Queensland axemen.”

Imagine the excitement he must have felt in competitions as he waited for the handicapper’s call, “One-two-three-four…” before he could strike his first blow; the satisfaction of that first mighty swing as the axe cut deep into the log and the exhilaration of making the final blow to cleave the log in halves. But for Bill, it wasn’t just the competition and the race to win. These events were the chance for Queensland’s finest axemen to come together, to reminisce about old times and to voice their hopes for the future. Bill Cotterell, highly regarded, was amongst friends.

Some sleeper cutter’s camps were situated in the most isolated places imaginable, and, to an extent, they lived almost the life of a hermit. Bill was lucky in that Flaxton sawmill workers often called on him for a yarn and a cup of tea. But, after the knock-off whistle sounded at the mill, he was left all alone with only the creatures of the forest for company. This was the time when he whiled away the long hours alone by fashioning beautiful forest timbers into works of art. Self-taught, he had become an outstanding wood carver. He often produced designs inspired by the plants and flowers he saw every day as he worked. Occasionally he would include something of unknown origin from his own imagination. His beautifully finished works never failed to impress, especially considering the crude homemade tools he used to create them. In the photo below, Bill carved the top for a small occasional table for my mother. It is over seventy-five years old and still looks good.

This man of many talents always made his own wood finishes and varnish, some from raw materials bought at a hardware shop and others he made from the berries and fruits he collected from the forest. 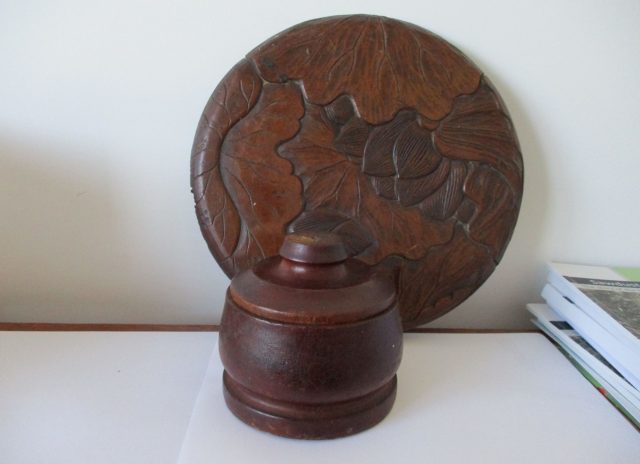 Bill, also an expert wood turner, built his own wood turning lathe. With no electricity supply, the lathe had to be powered manually. After a number of experiments and trials, he finally came up with a treadle operated machine which, in his capable hands, worked like a charm. On it he produced walking sticks, bowls, trinket boxes and even egg cups. The lidded bowl in the photograph was also made for my mother from Camphor Laurel. So expertly turned, the lid still fits perfectly after seventy years of constant use.

The time came when the ring of Bill’s axe no longer echoed through the forest. Never again would we hear the sound of steel on steel as he drove the wedges home or the steady chip, chip, chip of adze and broad axe. After a lifetime of toil this steely bushman retired to the Sunshine Coast. We didn’t often see him after that, but we never forgot him.

A man named Sam Foss once wrote a poem called, “The House by the Side of the Road,” which is more about humanity than a house. It always reminds me of Bill Cotterell, and as you read the last verse, I think you will understand why:

Where the race of men go by-

Then why should I sit in the scorner’s seat

Or hurl the cynic’s ban?

And be a friend to man.