Among the early settlers of the district were Alfred & Harriet Bowser.  Alfred was born in 1862 and lived on the Albert River near Beenleigh. (Grandson Ruben mentions in his recollections that his great-grandfather, Alfred’s father, had a road-making business around Brisbane, with quarries and ashphalt etc.)  They had five children – Edward Ernest, Lily May, Ivy Mildred, Cecil and Alma Norma.  In 1987, only Alma Downes of Woombye was still surviving.

The Bowsers came to Montville in 1900 and selected a farm almost opposite what became the Village Green and named it ‘Lilydale’ after their first daughter.  The homestead later became ‘Kingston’, then ‘Mayfield’, and then ‘Cafe Bar and Grill’ now occupies that site.  Alf was the first farmer to grow pineapples in the area, bringing the suckers up by packhorse around 1906.  When mature, the fruit was taken by horse and cart down to Palmwoods, where it was then railed to Brisbane.

After selling this farm to the Monty Dart family, around 1910, Alf selected land on the Western Road and carved a farm out of the scrub.  He had built one of the most beautiful homesteads in the area named ‘Ivyholme’ after his second daughter who had died young.  Many years later this house was removed and relocated at Maleny, where it still stands, but very much changed, of course.  The Bowsers lived there until 1919, when they sold to a Mr. A. C. Oakes. 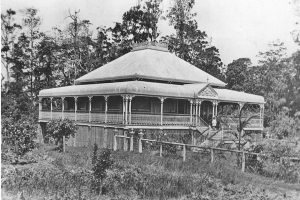 They left for four years, but returned and bought land on Mill Hill Road, and built the house which became ‘The Macadamerie’. At first they grew citrus and pineapples.  About 1930 they started planting nut trees between the citrus, as it was believed they were beneficial (to the citrus).  They were not at that time being grown commercially in their own right.  They sold half the farm to their daughter and son-in-law, Lily & Roy Allen, in 1925.  There was a smithy built at the edge of the road.

Alf Bowser was a good organiser, and initiated prize-winning district fruit exhibits for the Brisbane RNA Exhibition and the local shows at Nambour and Woombye. 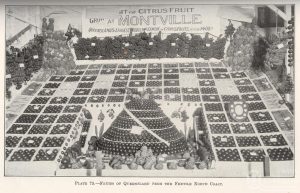 Produce from Montville on display 1927

He was also a councillor in the Maroochy Shire Council for a number of years.  The Bowsers were staunch supporters of the Methodist Church.

Now, Alfred Bowser married Harriet Unwin, and two of his children married into other Montville families; Edward Ernest married Annie Maria Butt (Ruben’s parents), and Alma married Val Downes.  Lily married Roy Allen, and Cecil married Dora Tishannon.  The elder Bowsers were very strict, it seems.  Ruben recalled (in 1987), “I know quite a bit about the Butts and what happened to them at Montville but not much about the Bowsers.  When we used to go to Maroochydore, the old grandparents (Butt) were living there then.  They had left Montville before my time.  At night time we used to talk around the table, the kids could stand there and listen to what they were talking about……and you never forgot it!  But when we were at the Bowser grandparents and adults were talking, the kids had to get outside.  So I don’t really know any of their history at all.”