The next generations of Collins in Flaxton

Bill and Marian Collins took over Kingview farm in 1961 when his father, William Joseph, retired to Glasshouse Mountains.

Bill was a war baby, born William Arthur Collins in September 1915 at Nambour. His sister Gladys, (Glad) was born in early 1917 and the two were close growing up. They had a favourite orange tree they would climb and think they could see the whole world. On Sunday Church trips into Mapleton, the family would go by horse and buggy, but sometimes Fly, the horse, wouldn’t like going up the long hill between Flaxton and Mapleton, so they would have to back down and start again. 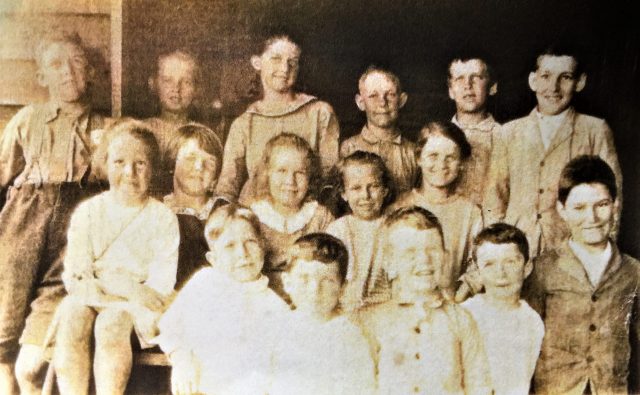 Bill spent his first year of schooling at Mapleton State School then went to Flaxton Provisional School when it opened in 1922 for the rest of his primary schooling. From Year 8 he travelled by bike or walked to Mapleton and then caught the tram to Nambour where he stayed overnight with his Richards grandparents so he could attend the Nambour Rural School. All things mechanical appealed to Bill and he would have loved to become a mechanic, but he was needed on the farm where he put his skills in mechanics to good use. As a young man he owned a motor bike and took his sister in the side car.

Bill was a keen tennis player, and he and his sister walked into Mapleton to play on the Mapleton tennis courts. He became a champion player in the area. Bill was also an accomplished mouth organ player and played with Wal Potts and The Flaxton Mouth Organ Melody Makers. 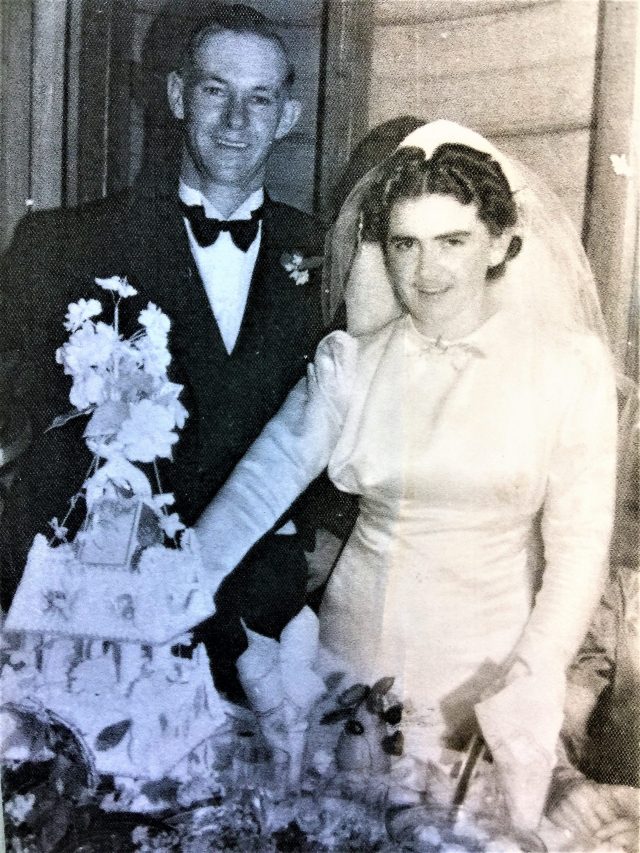 Bill met Marian Cowell, a friend of his sister’s (both girls were nursing at Brisbane Hospital). The couple married in Brisbane in 1941 and Bill brought his bride to live in ‘Carinyah’, the cottage on the Flaxton farm. They had three children – Percy, David and Heather. When they took over the farm in 1961, the cottage was rented out to the teachers of Flaxton School until it closed in 1967. Ron Carruthers, then Brian Brophy and lastly Ron Struthers all rented the cottage.

Bill was very actively involved in his community. He was Superintendent of the Mapleton Methodist Church for many years. The children enjoyed many a pillion ride in the sidecar of his Harley Davidson motor-bike. 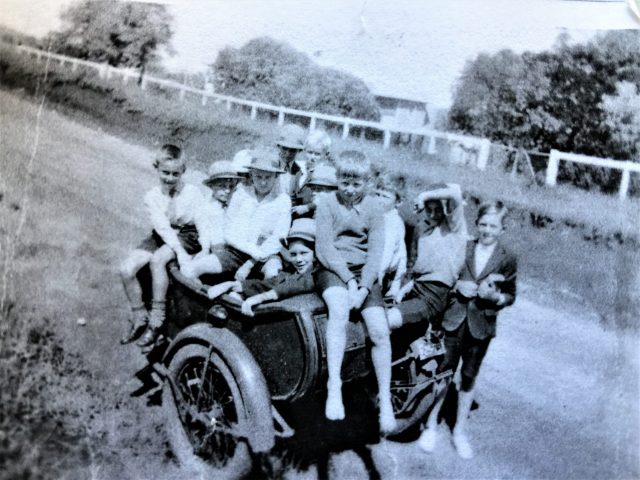 From his first year of school at Mapleton Bill formed a life-long friendship with Eddie DeVere who was to become chairman of the Maroochy Shire Council for many years and with Mick Jeffs who was to become the representative for the Mapleton area in the Council. Bill later called on these friendships in his role as president of the Flaxton Fruitgrowers and Progress Association and his drive was instrumental in such improvements as getting the reflective ‘cat’s eyes’ posts on the side of the roads essential in the Range rains and mists, and the laying of bitumen for the main road and also for improving the means for transporting fruit to the markets in Brisbane and to the Northgate Cannery.

Bill and Marian continued growing avocados, custard apples and pineapples. They also grew small crops such as tomatoes, peas, cucumbers and beans. They were also the first to grow the golden sweet potato in the region, after being asked by the DPI to trial those – another first for the region along with the avocados. The Nambour Show was a very important event for farmers and their wives. Much time was taken in preparing the best fruit for it, and a special memory was winning the trophy for the most varieties of avocados – 36! Marian was a wonderful cook and bottled fruit preserver, and the show was a time for lots of wins.

Life was often difficult and times uncertain as nearly every year from taking over the farm a significant cyclone hit the North Coast (as the Sunshine Coast was then known). There are many photos of stripped pineapples, ruined avocados and a ruined shed. I remember vividly Dad hammering nails into the roof while my brothers were hanging off the edge of the verandah side to hold the roof down.

Marian supplemented the family income by icing cakes, making bridal bouquets and teaching sewing at the Flaxton School. Many local girls have fond memories of these times. She was also president of the local C.W.A. for many years.

They were involved in all Mapleton Hall activities – most of which were to subsidise the running of the hall. They were members of MEGS – the Mapleton Entertainment Group Society, with Marian acting and singing and Bill playing the mouth organ alongside Ray Ensbey and others as the band that played for the many dances held at the hall. We began a little shop at the front of the house and sold our homegrown produce – the fruit, vegies and other small crops, as well as honey, jams and eggs. To cater for a growing need for refreshments for the increasing number of tourists travelling the range, we began the first café up on the verandah selling sandwiches, hamburgers, Mum’s special scones with homemade jam and clotted cream from our cows and our popular pineapple fluff.

Bill was a very modest and humble gentleman, who never sought recognition for the family. When he named his local unnamed lane, Ensbey Road in recognition of the Ensbey family who came after his family, he could well have named it Collins Road.

Bill’s health deteriorated in the last few years on Kingview and the heartbreaking decision to sell was made. The farm was sold in 1972 to American developers and was turned into a housing estate, Bill died in 1974, aged only 58 and Marian continued to live in Hillcrest Avenue, Nambour until her death in 2004. 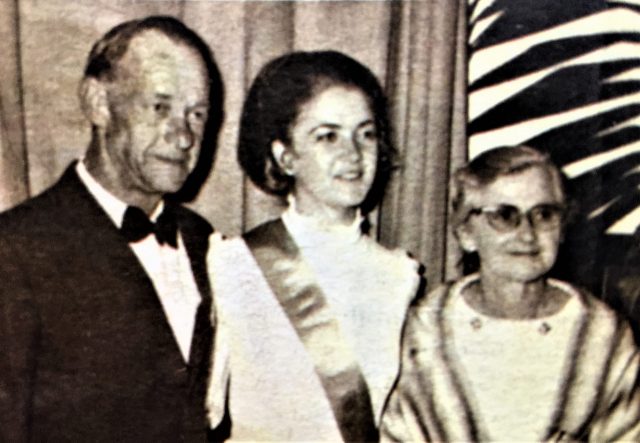 Bill and Marian with Heather at her debutante ball

The Collins legacy lives on still through Heather and her family who have the privilege of living in a third Kingview built on the original homesite in 1996 alongside Grandma’s camelias and a persimmon tree that was planted in 1927 and Marian’s frangipani tree and yukka plant from the sixties. It is special to be able to share these pioneering roots and a tie with the fifth generation of the Collins family to live in the Flaxton community. 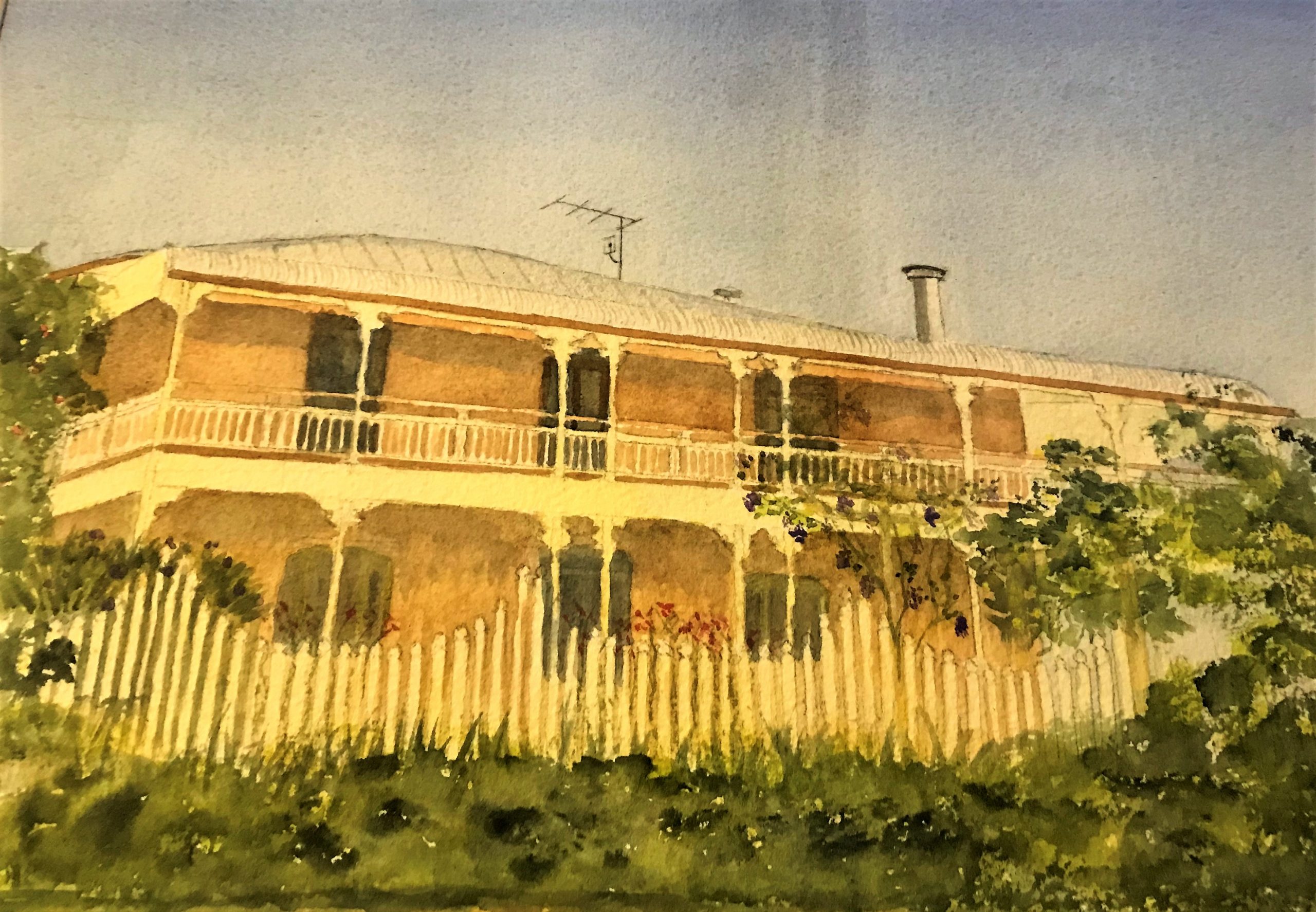 This painting captures the essence of Kingview 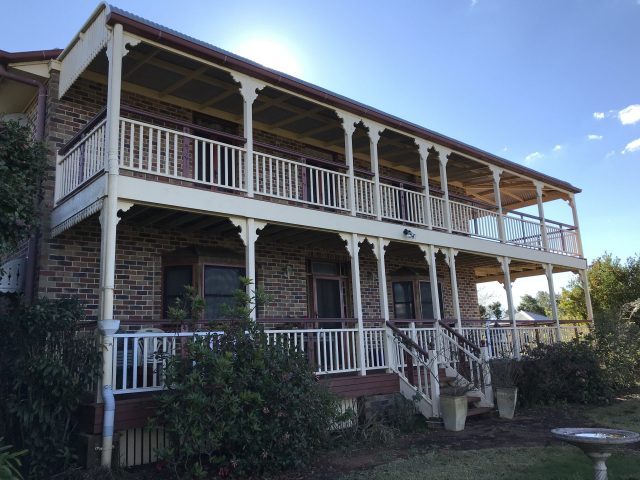