The Short Families of Hunchy 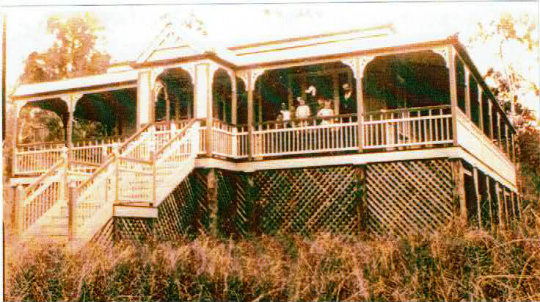 This is the house of the Shorts in Hunchy, early 1900s

The Short families represented another early family group, like the Smiths, of whom there were confusingly many, – three Smith families with numbers of  children. Five brothers Short (writing five ‘Short’ brothers seems strange, because they weren’t!

The brothers – John, Ted, Julius Henry (Harry), William (Bill) and Charles and one sister, Rosa all lived down in the Hunchy area from about the 1880’s.

Their father and his wife and their then three children came from England around the 1870’s. Julius Henry (Harry) was born on the voyage and named after their ship, the Julius.

On arrival in Brisbane they intended to catch the ferry up to Ipswich as they had been told there was plenty of work there. When they arrived, however, the ferry had gone and disconsolate, they sat on the dock and pondered their future.

*A man named William Pettigrew  came along who said he had land at Meridan Plains, a big selection encompassing the Mooloola River area. In fact, Pettigrew owned vast tracts of land and later developed interests in all the major industries – cattle, coffee, sugar, fruit, timber. He said that he could give them work there and that his bullock team would leave in two hours.

The Shorts worked for him for about three years.  Each Sunday they would go for a walk, exploring the area and one Sunday they walked all the way up to Buderim, the year was 1877!

The brothers settled at Hunchy and their children attended the Montville School, with the two youngest attending Hunchy School after it was built in 1924. The two eldest brothers, John and Ted never married.

The other brother, Charles and his wife Bertha (nee Atkinson) had three children – Gladys Phoebe (1920), Leslie Stephen (1924) and Stanley Richard (1927). Charles Short  was the first butcher in the area with his shop at Hunchy. It was from Hunchy that he carted meat all around Montville, making his deliveries to the different households. George Morrison bought him out and then Hobson’s of Palmwoods bought the business after that.

A second cousin, Alfred George Short moved up to the Range from Toowong in Brisbane and settled on a farm on Western Road (now Western Avenue) in 1922, surrounded by no less than five Smith families!

Long-lasting memories recall going down to Palmwoods on Owen Callaghan’s buckboard and four horses and then in his Dodge truck. He swore strongly at both forms of transport, but only the horses responded, so we’re told!

Mrs Senescall had the Post Office in her house at Hunchy and the Flaxton Post Office was at Bob Wyer’s house. George Morrison was remembered as ‘a great  lanky bloke whose feet touched the ground when he rode a pony.’

The Bill Short family used to take pawpaws up to Alf Smith’s shop (now Misty’s) for sale and great wagonloads of oranges would come down the Razorback Road on their way to Palmwoods Station and the markets in Brisbane. Sometimes the children would hang on to the backs of the wagons to get a ride up or down the hill, but after getting stung by the driver’s whip on their back, as Stephen remembered, some wouldn’t do it anymore.

Olive remembered starting school at the age of five and the teacher being concerned that it was too far for a little child to walk all the way up the Razorback to school. It was two years before the Hunchy school opened.

*A timber miller, William Pettigrew, took up a timber lease in the area in 1864, two years after commissioning Petrie’s exploration. The logs were hauled to Pettigrew’s mill at Maroochydore.

Article written by Barbara Ramadge-Ross from information provided by the Bill Short Family, 1987