The Skene Family of “Bon Accord”

This is a brief history of the Skene family who settled at “Bon Accord” in Flaxton, just of the first 3 generations, otherwise we will be totally confused by all the Georges and Williams.  There are many descendants of the family still in the area, but few bearing the Skene name.

George Skene Snr, with his wife Betsy, and 6 children, was a crofter and gardener at Lord Aberdeen’s estate at Auchindoir, Aberdeenshire in Scotland in the 1860’s.  The motto of Lord Aberdeen, and the city of Aberdeen, was “Bon Accord”.

William Skene was 23 when he completed his architectural exams in Scotland, 1885 the year before he came to Australia

In 1886, their eldest sons William, a carpenter aged 24, and George Jnr aged 22 arrived in Brisbane.  They lived in Brisbane, near Bowen Bridge Road.  George Snr and Betsy followed in 1887 with their younger children, Elizabeth 21, Ann (Nancy) 19, John 17, and Alexander 11. They were among the first immigrants housed at the new Immigration Depot, later named Yungaba.  George Snr was employed at the Queensland Acclimatisation Gardens, now the site of the Exhibition Grounds.  Elizabeth and Nancy both obtained work as housekeepers, and John joined Qld Railways as soon as he was old enough; he remained with them all his life, as clerk and auditor. He had no family and died in 1935. Alexander died shortly after their arrival from fever.

William married Agnes Nicol in 1888, and the first two of his seven children, William Jnr, and Agnes (Greber), were born in South Brisbane.  William and George Jnr were then looking at land to the north.  They obtained work with Mr Joseph Dixon at his Buderim cane farm and mill.  Whilst in Joseph Dixon’s employ, and working on the Dixon property at Flaxton, William applied for Selection of the large block adjoining Dixon’s, encompassing an area from the edge of the escarpment down to and including what is now Kondalilla National Park. It was Portion 93V – 158 acres 3 roods and 33 perches.  They took possession in February 1894, another baby, Annie (Rough), arriving in the same month.  After a journey by horse and wagon to the ‘shute’ at the bottom of what is still called Skene’s Hill, their few belongings were then carried manually up to C J (Christmas John)  and Ellen Wyer’s home where they lived until their own house was partially erected.

William continued his employment on Joseph Dixon’s banana farm, while clearing and planting his Selection.  George Snr and Betsy, and George Jnr all joined them to help establish the farm, which they named “Bon Accord” in memory of their Scottish homeland.  Purchase of the Selection was completed in 1899, and four more children, Elizabeth (Boyden), George, Laura (Woof) and Elsie (Hallett) were all born at “Bon Accord”, with the assistance of local midwife Mrs. Butt.  All seven children were students at Razorback, later Montville, Provisional School, over a period of 18 years. William was a reliable Secretary of the School Committee!

Economic conditions were not good around the turn of the century, and William was obliged to ply his trade as a carpenter again, while living and farming at “Bon Accord”.  William’s partner in the building business was George Olsen, and they were responsible for many of the area’s early homesteads.  They spent over 12 months pit-sawing beech logs for the construction of Joseph Dixon’s home “Chermside”, now called “Tanderra”.  It is difficult to find exact dates, but presumably he built, or rebuilt, the existing house at “Bon Accord” at about the same time, in the early years of the new century.

William and Agnes lived at “Bon Accord” until 1937, when they retired to Maroochydore.  William died in 1941 and Agnes in 1946; both were buried in Woombye Cemetery.  William gave the 80 acres surrounding the waterfalls, which he had discovered in the 1890’s, to the State, requesting its preservation for enjoyment by visitors.

During these years, William’s brother George Jnr married Edith Egholme in 1901; he had purchased his own farm at Dulong, and later another property at Woombye.  George Jnr & Edith also had 7 children; Edith (Stretton), John,  George, Robert, Daisy (Burgess), Ethel (Prudence) and Alexander.  George Jnr died in 1916 at the age of 52; Edith remarried in 1931 to Thomas Bailey, and died in 1966.

The parents George Snr and Betsy had moved back to North Pine, where George Snr again worked as a gardener.  He died in the hospital/aged persons home at Dunwich on Stradbroke Island in 1908.  Betsy went to live with her daughter Elizabeth (married Archibald Imrie in 1894) in Rockhampton, until her death in 1932.  Elizabeth and Archibald had only one daughter, May; they died in 1948 and 1943 respectively.

Nancy married William McCullagh of Narangba in 1898, and had 10 children; May (Duncombe), Margaret (McKee/Richards,Tough,Gill), Mina (Carseldine), Florence (Torrens), twins Lily (Bray) & Violet (Irvin), Grace, James, Rosie (Litherland), & Bill.  Wonderfully, all 10 of those children were present at a Narangba School Jubilee in 1960. Nancy was grandmother to David McCullagh, husband of Jenny McCullagh, see “Queensland Bound Too”.  Nancy died in 1953, and William in 1947.

The “Bon Accord” house, with some old sheds, still stands serenely on the top of Skene’s Hill in Kondalilla.  Owned by Max Percival for some years, it has been extensively renovated and extended, and is called “Yuruga”, but it would still be instantly recognised by the family who built there.   (Gillie Warren) 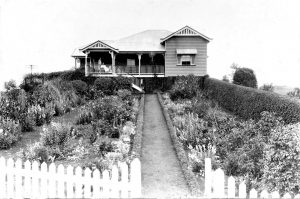