You can’t help but feel joyful in the presence of Jane Hutton. She’s wearing soft cotton overalls covered in hearts with string ties on the shoulders over a light cotton top. Her hair is drawn back and up in a graceful waterfall of warm honey. Her dangling earrings suggest fun and frolic. Her smile is a warm welcome and her enthusiasm and delight at spending time with you is contagious. 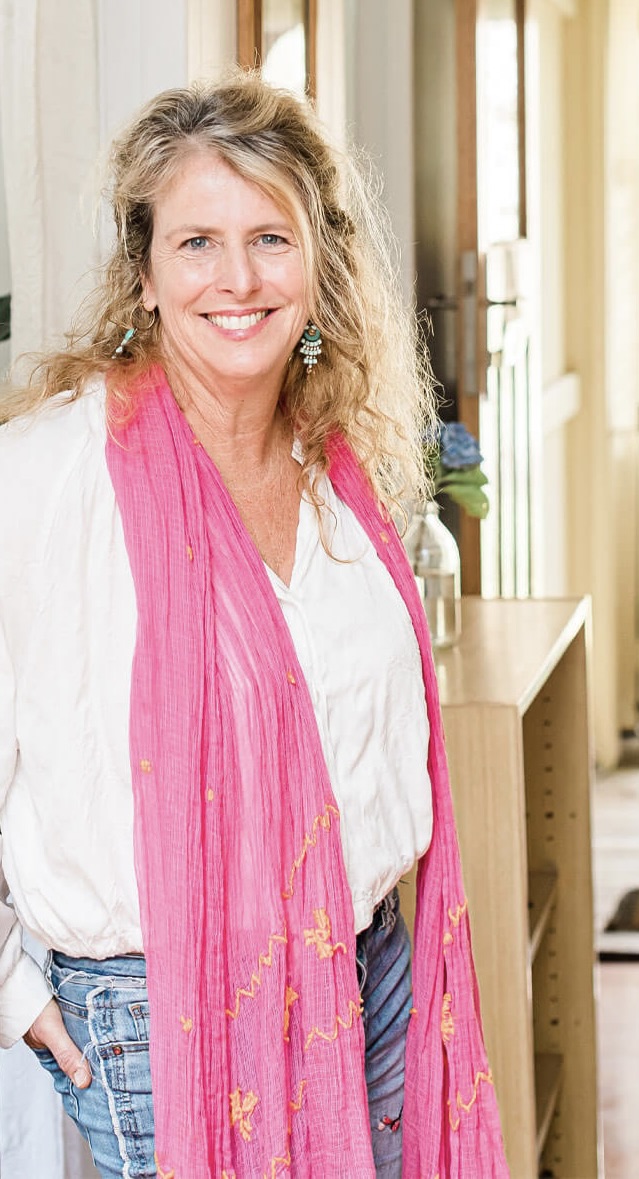 We’ve been invited to come and have a look at The Chook – that’s the Spotted Chook, the delightful blue sprawling Queenslander style accommodation in Western Avenue, Montville.
We sit and talk with both Leeroy and Jane, but Leeroy has groceries to put away and work on the computer and we understand that we will catch up with him another day.

We asked how the Spotted Chook came to be.
Jane explains that she and Leeroy purchased the land from her father Dr Bill Egerton, 26 years ago in 1996. They were living in Sydney at the time and Jane flew up with their two-year-old twins in order to share with the Montville Village Association the dreams she and Leeroy had for the block they had bought. They understood the importance of collaborating with the local community.

Jane was used to giving oral presentations in her workplace, but the stern faces of the Montville residents who sat in stiff rows in front of her as she pushed the twin’s pram back and forth were a challenge. Not one, seemed to nod in agreement, or smile encouragingly.
At the end of the presentation one person among the stony faces stood and clapped. It was Ian Russell who proceeded to sincerely welcome Jane and her family saying how lovely it was to have new blood in Montville and that he wished them all the best. It seemed to break the ice at the meeting.

At the time Jane was a social worker and had no experience in business but she came from a long tradition of do it yourself folk and when she realised that the local company they had employed was relying on Jane’s research, Jane went ahead and submitted the development application herself.

Their vision was to create the feel of a provincial farmhouse inn that she and Leeroy had fallen in love with whilst cycling through rural France. Jane also wanted to capture some of the mazy spaces she so loved in the Egerton family farmhouse on weekend getaways. She fondly refers to it as ‘the house on the hill’, and there it sits prettily over towards the far horizon as you look across to the rolling hills. They employed Sydney architect Sue Connor who took three goes before Jane and Leeroy felt it was right. Together, they created internal and external spaces that complement the natural environment. Theirs was a wholistic approach recognising that the architecture must work for them at a personal, emotional level to create both private family space, and discrete guest space. 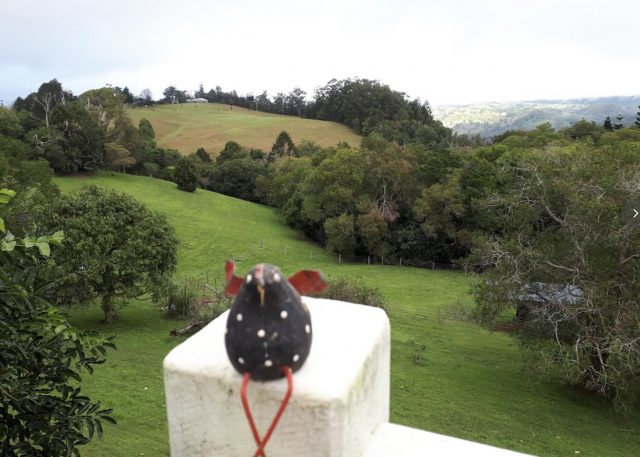 View from Amelies Petite Maison and The Spotted Chook

Leeroy and Jane wanted a pole house on one level to nestle into the contours of the land. They took inspiration on pole house design from Don Jepson a Danish lecturer at the Melbourne University. Jane wanted interesting spaces just like the holiday farmhouse of her childhood, two houses that had been somewhat unconvincingly coaxed together under the one roof. Council required that the house be stepped down from the road and not all on the one level. The plans were modified to step the building down the slope.

They employed Scott Allen, a local builder and his younger brother, Ross. They completed the build to lock up stage and Leeroy and Jane did the rest. Leeroy estimated his requirements for every job and pretty much was spot on – just two metres short for the skirting board in the laundry – he must have used that somewhere else. He’s rectified that now – finally in 2022. They painted inside and out. Jane chose pretty pastels – buttercup yellow, snowpea green, powder blue. You won’t find ecru or igloo white, oyster, snow or ivory. Colour is everywhere, wrapping about you like a warm embrace that bestows energy, security and yes – love. And it is from the heart that Jane and Leeroy have worked to realise their vision.

The pair wanted local artisans to contribute and found them all very willing co-creators. James Larson, a cabinet maker crafted amazing timber framed beds that became the centrepiece for each of the bedroom suites. The rich timber kitchen bench tops and drawers, the vanities and mirror frames are all bespoke Larson creations.

Leeroy and Jane became friends with their builder Scott and his wife Sharon, and soon met their friends Trevor Spohr and Kate Knapp. The names trip lightly on the tongue for they are delightfully engaging and winsome people. Trevor is a visual artist, a ceramicist who worked with Jane and Leeroy and their twins to create feature tiles for the wet areas. Naturally there were more than a few spotted chooks that featured.

Kate Knapp is a local illustrator, artist and author and the numerous touches of warm, fuzzy Knap-art that adorn the walls, speak of a heart-to-heart connection. Indeed, Kate and Jane worked together for a time on therapeutic kits creating and illustrating positive affirmations.

Then there’s Chris Hooper who crafted the treads, stringers and rails for the stairs and built cupboards for the fridges in each bedroom, the reception desk using corrugated metal, cedar and hoop pine.
And even 23 years later, at the brink of retiring and farewelling Montville Chris was asked to do the final maintenance and repair of a few of the timber features. Fortunately. he agreed when Leeroy promised to lend a hand in the workshop.

There were many details that Jane envisioned – she wanted timber furniture and fittings.
Scott was able to obtain French doors from Mr Fuller at Mapleton. They were the doors from the Nurses’ quarters at the Baillie Henderson Hospital in Toowoomba when it was renovated. It was the Easter of 1999 – the 2nd April – but with a quirky sense of fun and frolic or devil and dare, they had hoped to open on April Fool’s Day. As it was, they had two completed rooms ready to open. They were inundated with requests for bookings and found themselves offering rooms that were unfinished with paint still wet on the walls. It was one of Montville’s all too frequent wet Easter weekends with mist and rain.

They loved the name that so aptly described their intention – ‘Ferme Auberge’, a farm inn offering farmhouse style accommodation plus meals cooked from farm produce. But they quickly got tired of explaining no it wasn’t a closed aubergine. In the late nineties, Australians might have some inkling of French, but not enough to appreciate ‘Ferme Auberge’. An integral part of the place, and part of the family were the Hamburgs that prettily strutted about during the day and refused to be put to bed at night preferring a branch high in the tree. Many a time Leeroy had to get out the ladder and coax the recalcitrants to bed. So it was an easy choice to create the readily familiar name ‘Spotted Chook’. And so it was.

Today when you visit the Chook you’ll find the windows of each suite are swathed in marvellous French fabric. Jane makes her own curtains. Actually, she selects her own fabric too. When she and Leeroy visited Paris, or sometimes Seville, Jane might just mention to Leeroy, “Oh I think I’ll just pop across to Montmartre for some buttons.” Yes, Leeroy knows to bite his tongue and bide his time for that means the purchase of another 10 metres of fabulous fabric for yet another set of curtains.

We start the tour of the accommodation rooms in the Gilded Room where there is a touch of gold wherever you look – on fabric borders, the hand-painted bedend, lampshades, mirrors and décor – look for the flamboyant gold flamingo.

Jane explains as we enter the Snowpea Suite that when they first opened in 1996, no accommodation facilities allowed children. When they offered a family room, the local information centre sent every family to them. They had to repeatedly remind the booking agents that they also had rooms for couples.

When Jane changed the wall colour from a yellow to a restful blue in the Buttercup Suite she realised to keep the name for the suite she’d need to create a painting of buttercups to hang in the room and so she did. It is just what Jane does. 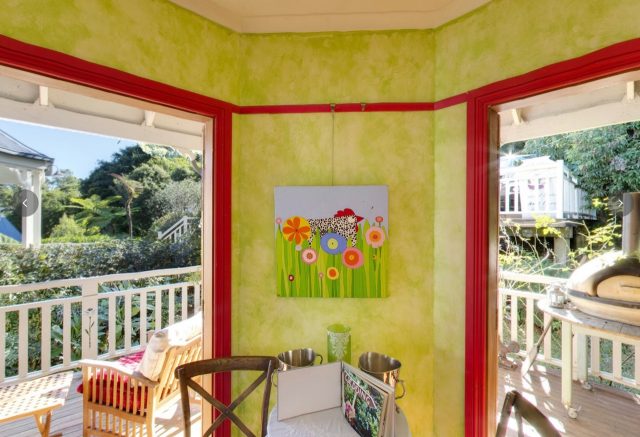 Inside Outside connections at The Spotted Chook

The gazebo is a delightful outside setting with its turned ironbark poles, shingle roof that looks just like old French slate, metal work rails and fragrant jasmine. Jane laughingly calls the gazebo a folly – although it’s certainly a practical and usable space for special events. It sits over the emergency fire brigade’s water tank and the floor pavers can be readily removed for access. The gazebo’s crowning glory is the concrete spotted chook perched jauntily at the roof’s apex that required a cherry picker to put it in place. Leeroy and James erected the gazebo themselves and Jane is quite sure there must have been a deal of colourful words although she was out and missed all the fun.

Amelies Petite Maison (named for the movie) was once Leeroy’s shed, but when Council required single level wheel chair access for guests, they submitted the converted shed as a test case, creating a carpark and wheelchair friendly ramp to the breakfast/dining room in the main building. Despite initial knockbacks, Jane and Leeroy held their ground and Amelies was finally approved as accommodation not only with wheel chair access, but with modified, kitchen, bathroom and sleeping facilities. When they hosted a French exchange student, Amelie, her visiting friends were stunned that her host family had created and named a room in her honour. It was a fortuitous coincidence, but who’s going to stand in the way of a good story. “Isn’t this what all host families provide for their exchange students?” Jane could innocently ask.

When Leeroy needed to take some time-off Jane went to work and came home chopped wood, fed the chickens, hosted guests, offered a hot breakfast and kept that engaging, heart-warming smile as she simply did what needed to be done.

There are so many more wonderful stories to tell about the Spotted Chook and the Hutton family. Every guest seems determined to revisit now that the property is officially on the market. Locals especially!