Potts and Mac – as affectionately remembered by the Plowman Brothers

Between the two Dixon properties on Mill Road, Frank Waldo Potts and David McHaffie ran a pineapple and mandarin farm. Wal Potts was born at Sandgate in 1888, the son of a well-known Brisbane tailor whose clients included Queensland governors. After serving with the Australian Imperial Forces in World War One, Messrs Potts and McHaffie bought their Flaxton farm. Wal’s passion had always been art and here on the Blackall range he found a super abundance of subject matter to inspire him. He specialised in painting landscapes and still life. Two of his still life paintings (flowers in vases), graced our walls for many years. My brother David recalls walking into Wal’s house where the lounge room contained some of his paintings and easel. He did some of his paintings here, especially of flowers in vases. Wal had the front bedroom and David the back bedroom. Wal used to smoke roll-your own cigarettes, always Capstan tobacco which came in round tins.

I remember as a very young child at home with Mum when she saw someone ‘lurking’ on the hill, probably 200 metres from our house. Determined to investigate, we tramped along the road toward the mystery person. It was Wal Potts who had set up his easel to paint a small grove of tree ferns growing there. I wondered how a mere mortal could reproduce such a beautiful scene on canvas. Sometimes we would call at his house and admire his many paintings. 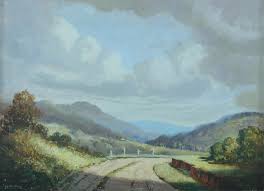 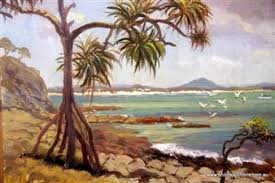 Wal exhibited over 170 landscapes and still life paintings in several prominent galleries and in public places including the Royal Queensland Art Society. Whilst at Flaxton he painted a landscape which he called, “Obi from Mapleton Range,” which is now in the Queensland Art Gallery collection along with another of his watercolours, “Valley of the Maroochy.”

Wal and David became the vital glue of the Flaxton community for 30 years. When my older brothers went to the Flaxton school, Wal always turned up at their end-of-year break up picnic to perform magic tricks. Not only did Wal fascinate kids with his magic tricks, he was also a keen musician and started the Flaxton mouth organ band of which my father was a member. He organised numerous events including concerts and sporting matches. The Flaxton Mouth Organ Melody Makers under the direction of Wal Potts and J.R. Perkins were always in demand at fund-raising events, church concerts and birthday or engagement parties and weddings. Wal was also a fine flautist and conductor. On the Wings of Song was a popular request. Wal was even called on to co-judge the Annual Plain and Fancy Dress Ball of the Montville State School in 1932.¹

Although they were not big men – Wal was 5ft 8ins (172cm) and Mac was 5ft 3ins (160cm), they worked hard on their farm. ² They had a draught horse called Ignatius (Iggy), which they used for ploughing and for collecting pineapples from the field. At harvest time they picked pineapples by hand into wicker baskets. They placed the full baskets at the end of each row of pines. Mac then harnessed up the horse to a slide and went around tipping the baskets into a large container in the slide for transport to their packing shed. The horse paddock was where “Brigadoon,” now stands. They alternated their pineapple plantings between two plots of ground, one fallow the other productive and vice versa. Pineapple suckers from their current crop were planted to provide the next year’s crop.

Wal and Mac provided a portion of their farm for a cricketing oval. Not exactly the MCC, many a hard-fought match was nevertheless played out on their horse paddock.

Wal and Mac, like many people in those times, did not own a car. People were more community minded then and lifts were always forthcoming.

Mac often walked about one kilometre to our place where he and Dad would reminisce about WWI and discuss the news of WWII. Wal and Mac were WWI Veterans, as was my father, and I recall all three discussing grim WWII news in the 1940’s. From just near their farm, I used to watch, absolutely fascinated, as searchlights, probably in Brisbane or on Fort Bribie, raked the sky searching for enemy aircraft. David also remembers attending some functions held in Wal’s and Mac’s packing shed. During WW2 they held send-offs there for some of the Flaxton and Mapleton men who were going off to join the armed forces. 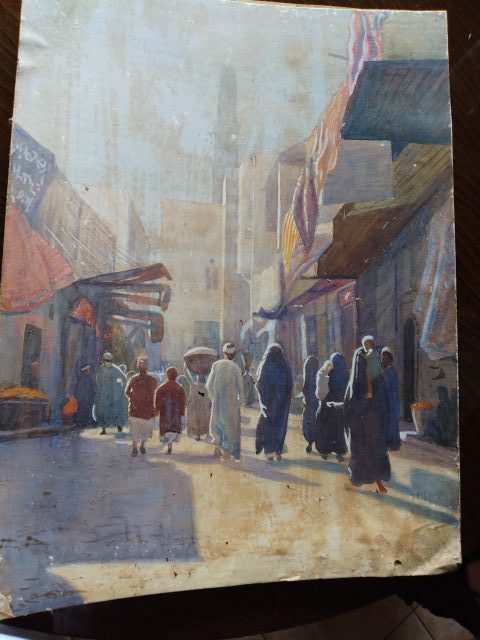 Streets of Cairo, 1921 (Courtesy Barbara Harrison – Wal gave this painting to her Grandmother)

Wal and Mac sold the Flaxton farm to Mr Bromley before retiring to Woody Point in 1949 where Wal continued to paint and exhibit his water colours. He died in 1970 but his contribution to Queensland art lives on.

was born in 1887 at Clydebank Dunbartonshire Scotland to parents Alexander McHaffie (1848 – 1907) and Elizabeth nee Scott (b1849). He had a brother Richard (1890 – 1953) David came to Australia in 1914. Although he had not been accepted into the English military because of an understandard chest, when he applied to join the AIF in 1916, he was accepted. Mac had been a Presbyterian clergyman. He met Wal Potts while serving and the two became lifetime friends. They worked their Flaxton farm initially growing bananas and then pineapples and mandarins and throughout the fifties enjoyed retirement at Woody Point, Redcliffe.  Mac died in 1961 aged 74.