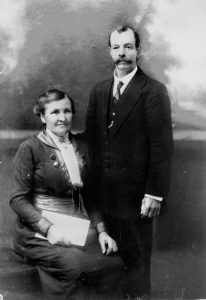 Mr. William Skene, of Maroochydore, collapsed and died by the side of his car a short distance from the Caloundra turn-off, aged 79 years and ten months. The late Mr. Skene came to Brisbane from Scotland in 1886 in the S.S. Cloncurry, and took up carpentry and house building. Later he went to Buderim Mtn., where he grew bananas. During the crushing season he worked in the sugar mill owned by the late Mr. J. C. Dixon.

In 1893 Mr. Skene selected land on the Blackall Range, now known as Flaxton. At this time there was no access to the Blackall Range except by horseback or bullock team. Mr. Skene lived on this property, known as ‘Bon Accord,’ for about 45 years, during which time he took a keen interest in all matters pertaining to the advancement of the district. He was also a regular exhibitor to the then Woombye Show and on several occasions gained the prize for the greatest number of points in the citrus section. In 1937 he sold the ‘Bon Accord’ property and retired to ‘Balgownie,’ Maroochydore.

Although of a quiet disposition, he was ever ready to lend a helping hand to anyone in need. The deceased is survived by his widow, five daughters. Mesdames Greber (Coolangatta), Rough (Maleny), Boyden (Caloundra), Woof (Indooroopilly), and Hallett (Palmwoods), and two sons, Messrs. W. N. Skene (Brisbane) and Private Geo. Skene (Maryborough). There are also 22 grandchildren and three great grandchildren. The funeral moved to the Woombye cemetery, the Rev. W. R. Cowan officiating at the graveside.