Ernest and Emma Dalton, two of the earliest settlers in the Montville area (then known as Razorback) purchased about fifteen acres south of the present town on which they built their home which became known as ‘Elston’.

Originally it was a one-storey building and possibly the first boarder there was the first Head Teacher of the new Montville State School, Emily Palmer of the famous literary family.  Miss Palmer was  headmistress from 1896-1902.  She later married Robert Bulcock Jnr of Caloundra and became a well-known poet and writer.

Fred Thompson, a builder and his family bought Elston in 1906, raised it into a two-story building, adding a kitchen, dining room, lounge  and their own and staff quarters on the ground floor. 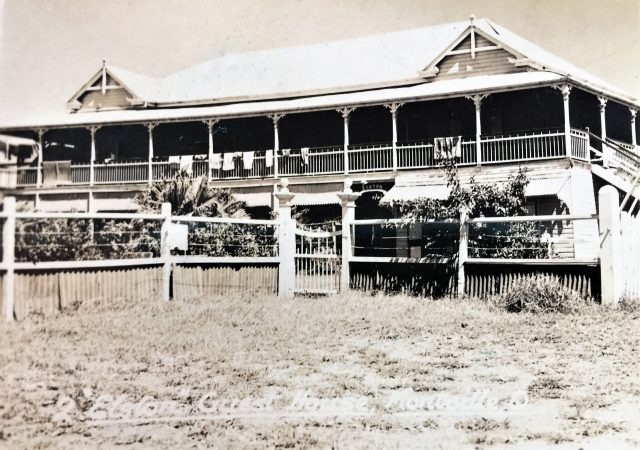 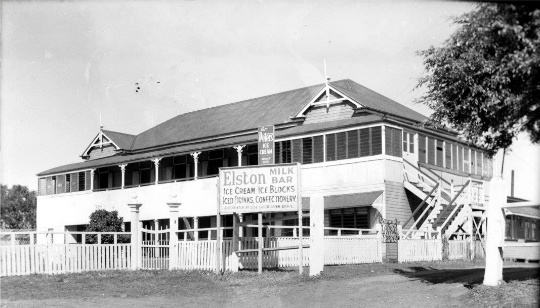 At peak holiday times, it could accommodate fifty guests and was a major venue for convention groups, Masonic Lodge dinners (of which Fred was a founding member), and large holidaying families and other groups. A number of politicians and other well-known figures holidayed there in the old days, including an overnight stay by a Governor of Queensland.

It boasted many facilities in its heyday, both natural and man-made. At the rear of the property, along a lovely bush track, was an excellent creek with a beautiful waterfall and a swimming pool constructed out of local rock, complete with diving board.

In front of the building, a first class, full length bowling green was built by Fred Thompson, a keen bowler. Fred maintained it was the first in Maroochy Shire, followed by Palmwoods Club. A tennis court was also added to the right of Elston, on a lower level, now covered in trees and garden and a small cottage. Horse riding, croquet, table tennis and bush walking completed the activities available and, together with unsurpassed views of the Coast, reportedly good food and comfortable accommodation made Elston a very desirable destination for over 50 years.

It was used during World War II for soldiers on Rest and Recreation when the doors were blacked out and special shades were used to cover the lights at night.

Elston has had a number of owners over the years – the Daltons, Thompsons, Wilsons, Crambs and Fentons. It was while it was owned by the Fentons in the 1950’s that it unfortunately burnt down, a victim of bushfire, and guests at the time were forced to jump from the verandahs as they became cut off from the stairs.

After the fire, most of the rubble from the once graceful old wooden building was bulldozed down the rear slope and into the rock pool, destroying all vestiges of what had once been a very popular and highly regarded guest house. One large old gatepost still remains, obscured in trees at the front of the present property and the bowling green had long disappeared under the bitumen road when it was put through.

Such a lot of history, many happy memories, but only a few tangible scraps remain.