On New Year’s Day 1897, ten Salvationists from Nambour rode to Razorback to lend support to local Salvationist, Frank Senescal who had been conducting cottage meetings at his home. They were so well received that it was decided to open an outpost at Razorback. Half an acre of land was made available by Frank Senescal. Records show the land was purchased for £5.00. Wooden barracks were constructed at a cost of £28.00 using timber donated by a local sawmiller. This first Church in the district was used by all denominations. After a cyclone destroyed the barracks in 1903, services continued in the Hall which had just been completed. The block was purchased by George and Olive Carpenter in 1959 for £10.00. At the time it was a steep, tangled wilderness of lantana with wild sunflower completely covering generations of rubbish from the blacksmithy across the street. Today the home that the Carpenters built in 1974 is available for holiday rental. (Adapted from an article provided by General George Carpenter to Steph McLennan, 15/04/1981, an article by George Carpenter from the Range News 25/03/94 and from the “War Cry”, official gazette of the Salvation Army, 16/01/1897, p7)

George Carpenter Place was named for this Salvation Army local who instigated the Montville tradition of celebrating Christmas and Easter festivities as ecumenical, community events at this site, Razorback Lookout. These celebrations commenced at Christmas 1977 and continue today – a heritage that has been proudly nurtured and sponsored by the Hall and Progress Association, now known as the Montville Village Association. 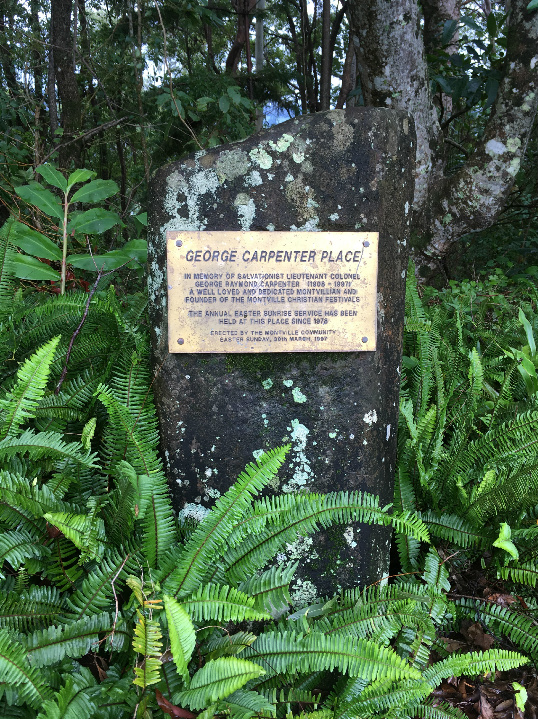