People of the Jinibara Nation had a track that gave them access to Baroon Pocket from the South East. It crested the escarpment just to the south of what is now the Montville Sports and Recreation Ground, wound its way west to a bluff then followed a ridge down to the most famous Aboriginal meeting ground in what is now South East Queensland. It is not surprising that the early European Settlers used this same path to explore, settle, take timber and farm this area that was the southern end of the Razorback Settlement that became Montville.

Robert Laverick and his wife Ruth built their home in the Pocket around 1865. Robert worked as a butcher at Cobbs Camp, (Woombye) and returned home to his wife Ruth and family after shutting up shop on Saturday afternoon. Robert followed the Razorback track up to what is now Main Street, Montville and then would travel down, what is now known as Mill Hill Road, to Baroon Pocket. Robert would stay one night and leave again the following day, ready to start work on Monday. Ruth and the children were visited by small groups of Aboriginal people who sometimes brought them food. Ruth and Robert Laverick were the first Europeans to settle in the Pocket. They moved to Montville in 1898. Their daughter Lilly married James Ruddy and they built a house at the end of what is now Mill Hill Road. 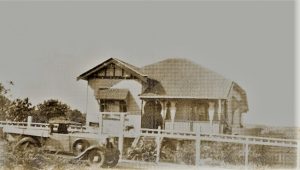 This is the second house of James and Lilly Ruddy built by Bill Venning in 1920. It was later bought by Artie and Madge Glover (nee Ruddy)

In 1887, Thorvald Weitemeyer with his pregnant wife, her sister and three small children, followed the Aboriginal track up the escarpment to settle on 160 acres that included what is now the sports ground and Michael Glover’s farm. As others followed, including the Lavericks from Baroon Pocket, the track became more established by the passing of horses, carts and drays. Then, in the late 1800s, a timber mill was established on the bluff by the Hamilton Brothers. Stories suggest that some of the Aboriginal men worked with the timber getters to supply it, and an Aboriginal family lived near this site well after it had gone. The mill laid a tram track down the ridge to Baroon Pocket and installed a big old Thornycroft truck to winch the logs, chained to trolleys, up.  The track out became a road – Mill Hill Road; and the timber produced was used to build early settler homes and the famous guest houses of Montville.

In the 1940s, Mill Hill Road supported a number of extensive pineapple farms. Cliff Dart’s farm extended from the north of Mill Hill Road as far as where Clouds Motel is situated today. The Artie Glover family had two farms, one next to the sports ground and one at the mill end of the road. Many of these farms survived the wars years with the labour of Italian POWs whose legacy is slowly coming to light. Then, in the 1960s, Mill Hill Road became famous as ‘Lantana Lane’ in Eleanor Dark’s novel of the same name. ‘Lantana Lane’ captures the soul of this isolated rural community.

Terry Glover, son of Artie, was a boy growing up on Mill Hill Road when Doctor Eric Dark and his wife, Eleanor live there. By then, Don and Evan Williams had bought the Dart farm but were still growing pineapples. He recalls few farmers had their own tractors and hired contractors to plow the land, although Tom and Dulcie Brown were still using a horse drawn sleigh to haul the picked fruit to the packing shed. There was also a ‘Smithy’ about halfway down the road that was a local institution. Terry played in the ruins of the old mill and remembers the big boiler rusting away in the yard. We know the mill had burnt down by 1920 but can’t determine when it was built or by whom.

Mill Hill Road was still a dirt track, dusty in the dry and so muddy in the wet that the cars had to have chains on their wheels to drive along it. Local characters included Martin Winner, a farm labourer who worked for Artie Glove for over 20 years, lived in a shack at the back of the farm, knocked off when the 5.00 o’clock plane flew over and walked into Montville once a week to buy his supplies. Terry remembers another local character was Nelson, a one- eyed Kookaburra that Eleanor Dark also mentions in her novel. 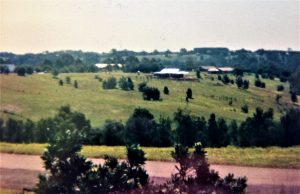 The northern slopes of Mill Hill Road after the pineapples

By the 1970s, macadamias and avocados were starting to replace pineapples in the farms along Mill Hill Road which now could boast a single lane of bitumen. Farms were broken up, some subdivided into small acreage lots and the open expanses were lost to houses and trees. 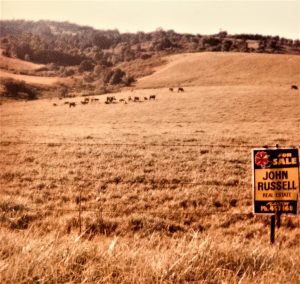 The few remaining farms struggle as small-scale farming becomes increasingly unviable. However, when you drive down Mill Hill Road today, you might still hear a kookaburra, possibly a descendant of Nelson, and, if you try, you might still see rows of pineapple plants marching up to the horizon.