Our POW Story Continues in Palmwoods

Hinterland Times ran our follow-up story on the work of Italian POWs along the Blackall Range and across the Sunshine Coast Hinterland in its April 2019 edition, and as we hoped it gave us another insight into this intriguing aspect of our largely forgotten history. Through family connections, John Atkinson was sent copies of both stories and has written to the Montville History Group about his recollections of working with Italian POWs on his Dad’s farm in Palmwoods. John has given us permission to offer his letter to Hinterland Times for publication.

I recently received a brief note with two newspaper clippings relating to Italian POWs in Montville. At that time, I lived at Atkinson Road, Palmwoods being aged 14. Dad grew pineapples and employed two POWs – later just one. The man in charge of these POWs was Captain Fletcher who was stationed in Nambour. He also grew pineapples for many years after his army service. His farm was right near Palmwoods and apparently was part of a farm formerly owned by his parents.

Each farmer was allotted two men: the farmer being responsible to provide food and accommodation apart from his own home. The first two prisoners we had were the Pasqualies: both named Luigi. They were uncle and cousin. One was called “Little Luigi” and the other “Big Luigi”. Their first job was to help build a shed for their living quarters. I’m sure I have heard of the man Pietro which in English is Peter. Those in charge under Captain Fletcher were not very strict about some things. My uncle also employed them on a cane farm at Bli Bli.

The two Luigis were later transferred to Glasshouse Mountains. I had an uncle, Dad’s brother, who lived on a farm nearby. One time I went by train and visited them. They were replaced by Francesco Telesi, called Frank. I had just left school and worked with him for years, not sure how many. I learned to speak and understand some Italian. I think of the hard taskmaster – we worked (hard) but I thought that was normal. Dad was a non-smoker and non-drinker and may have been strict on these matters. Frank and I worked together most of the time. 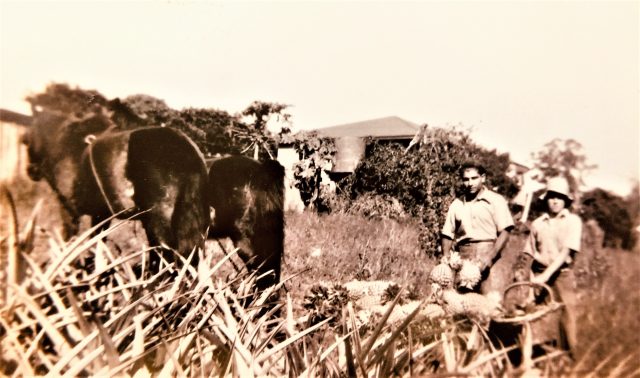 Dad would take Frank with us when we visited family and at other times. I noticed my brothers and sisters, Thelma, Peter and Colin were mentioned (in the clipping). 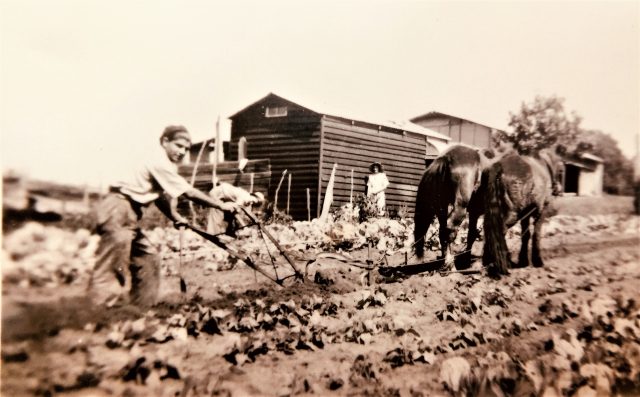 Francesco Telesi ploughing with John and Mrs Atkinson in the background

Frank came back to Australia (after the war) and worked for Dad again. Later he went to Sydney and back to Naples in his old age. My sister visited him there.  Dad lived to age 90 (he died 24 years ago) and Mum lived to 93. Frank could speak and write very good English. I wrote to him for years. That was a long time ago. I am now 88 years and thinking and writing are not so good. Enclosed are two photos of those times.

John’s recollection highlights just how the ‘official’ records and local history don’t line up. Official records only have one Pasquale POW managed from Nambour, a Pasquale Serafini. There is no record of a Luigi Pasquali, let alone two of them. We do know that Pietro (Peter) Basile worked briefly at the Atkinson farm in the 1945s and that he accompanied the family to the beach on at least one occasion. The National Archives have advised us that not all POWs may have been issued with ID cards and that many were inadvertently destroyed after the war, so the ‘official’ records are incomplete and unreliable. Official regulation dictated that the POWs were not to socialise with the family or locals. The Australian attitude towards what might be conceived as unnecessary regulation and its predilection for nicknames adds to the confusion. John’s recollections, however, have confirmed one currently undocumented ‘myth’.  Some farming families established lifetime bonds with the Italian POWs who worked with them.