Place Names of Montville and Surrounds – Along Balmoral Road

Some names along the Blackall Range between Montville and the turnoff to Maleny recall the early days of settlement. The Blackall Range itself was named in 1874 by government surveyor C S Bradbury in recognition of the contribution made by Samuel Wensley Blackall who was Governor of Queensland from 1864-1871.¹

Between 1879 and 1882 James Campbell of James Campbell and Sons sawmillers of Creek Street, Brisbane and also at Campbellville (from 1881-1890 near the junction of Mellum and Coochin Creeks) acquired 4 selections on the southern end of the Blackall Range each being about 160 acres.

William Simpson, a timber getter and bullocky who selected 360 acres in 1879 in what is now North Maleny recalls, “ Later there came a Mr. and Mrs. Otto to John Campbell’s selection, ‘Balmoral’, where David Burton was engaged by Messrs. Campbell, growing sugar cane for bullock feed. Mr. J. Burgess, the pioneer farmer, also used sugar cane for feed, as there was no grass, nothing but scrub everywhere. Burton, while drawing cedar in the scrub, planted a number of fruit trees, which grew well. A Max Wandrey was on Campbell’s other selection, ‘Ellerslie’, and Joe Eyles had a selection, adjoining Campbell’s, where he grew sugar cane to serve as feed for his bullocks when out there drawing timber. These were the first clearings in the Maleny district.”4.

Balmoral and Ellerslie were subdivided in 1906. They are favourably described in an ad in the Nambour Chronicle 7th July 1906 on page 6 under the heading, “Maleny Scrub Farm”.

“Messrs Isles, Love, and Co advise that the survey of the Maleny Scrub Farm Blackall Range, is now completed, and that plans are ready for distribution The sale will take place at Dyer’s Hall, Lands borough, on Monday, August 6 (Exhibítion week) In connection with the quality of the soil which is described as the pick of the Blackall Ranges,” Mr Harry Raff, surveyor, writes under date 23rd ultimo, as follows -“In all my experiences I have never seen better virgin scrub land. It is practically level, and it would be impossible to find on the Black all Ranges a similar area with a smaller percentage of broken land. The road I have surveyed through Ellerslie, when cleared and formed, will lie as easy as Queen Street. The soil is of the richest possible description with a great depth, and will grow anything, whilst Obi Obi Creek and intersecting gullies insure a never-failing supply of beautiful water. I think it is a very fine property indeed.” 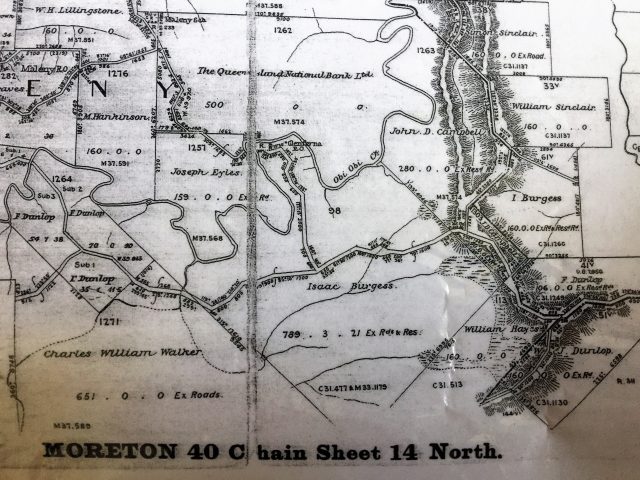 ‘Ellerslie’ was sold by John. D. Campbell to Albert and Ernest Pattemore, sons of J R Pattemore who then sold it to William Francis Gardner who divided what was now known as ‘Ellerslie Estate’ into three dairy farms, working one and employing share farmers to manage the other two.5.

The 1930s were a golden age for ‘Ellerslie’. There was share-farming and even handyman work available as an ad in the Nambour Chronicle 30/11/1934 p4 testifies. There are many newspaper references to Ellerslie tennis players at this time. The tennis circuit consisted of Witta, Maleny, Ellerslie, Balmoral, Conondale, Bald Knob, Peachester, Howell’s Knob and Baroon Pocket. Most of these were ant bed courts situated close to the family homestead.

Between 1930 and 1934 Alan and Mary Weeks and their eight children were share-farming at ‘Ellerslie’ and enjoyed playing tennis both social and competitive when the demands of running a dairy farm allowed. Brothers Ed and Jim Weeks and Tom and Maurice Weeks played doubles and singles and mixed games where there was ample opportunity for friendships and romances to flourish. Other ‘Ellerslie Estate’ tennis regulars included E Lamb, K Patterson, and R Burgum, Mrs E Gardner and Mary Burgum.6.   North Maleny roads such as Gardner Lane and Burgum Lane recall these early settler names. There is even a house on Obi Lane (south) that bears the name ‘Ellerslie.’ 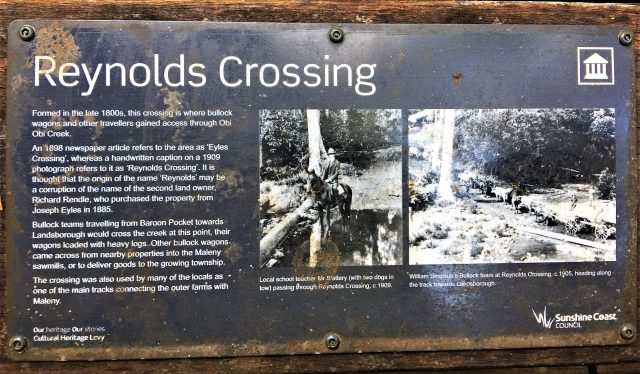 Before being named Reynold’s Crossing it was called Eyles Crossing after Joe Eyles, the original settler. It was at this point that bullockies and their waggons could cross the Obi Obi Creek from Baroon Pocket. Today this land is part of the heritage trail network along the Obi Obi Creek.7. and the track follows the perimeter of the Golf course and links up with Fairview (Pattemore House), Maleny Settlers Green, the site of Mosman house (A Pattemore house built for share farmers and occupied by the Dickson family from 1922 – 1947) and the Bails, built by the Pattemore family as a milking shed for their jersey herd shortly after 1907. 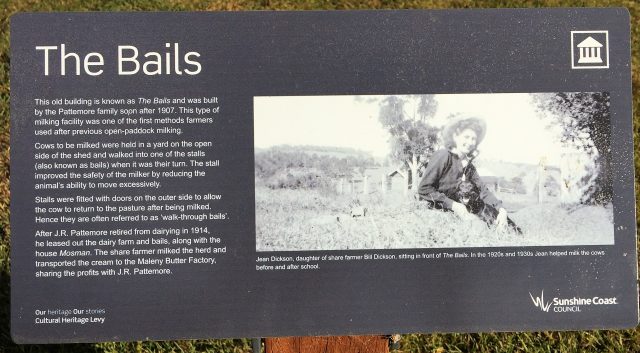 Jean Dickson sitting in front of the bails, 1920s

Other snippets about Ellerslie

W F Gardner built a cheese factory on Ellerslie and brought out a cheesemaker from the UK but there is no evidence that cheese was ever produced or sold commercially.8.

On New Year’s day in 1919 Lucy May Plucknett fell from a ledge of rock into a deep pool and drowned. Her sister raised the alarm and Mr Guthrie pulled her from the water but when a doctor was fetched she could not be revived.9.

Today the names ‘Ellerslie’ and ‘Ellamore’ have largely passed from local memory, but they are recalled now to take their place with other place-holding names we are more familiar with.

William and Mary Gerrard’s Lookout is situated on the Blackall Range between Maleny and Montville.

William Gerrard selected his property in 1890 and grew strawberries which were transported by pack horse to the rail.

Nearby Balmoral Lookout gives commanding views of the Maleny region and bears the name of many Campbell family homes.

In 1883, the government surveyor, Alfred Delisser, (Delicia Road, Mapleton is a corruption of his name) was commissioned to mark out a road along the summit of the Blackall Range from Grigor’s Bankfoot House at Glasshouse to connect with the Gympie road north of the range.  He pushed his way through the scrub along with his survey assistant, cook and the general hand.

From the gate of John D Campbell’s property near the present  junction to Montville on the Maleny – Landsborough road Delisser continued east for three more miles, and then followed the edge of the escarpment as it veered to the north, becoming the Blackall Range. Concerned that future settlers may try to prevent his preferred road alignment from passing through and dividing their properties, Delisser wrote in his journal: 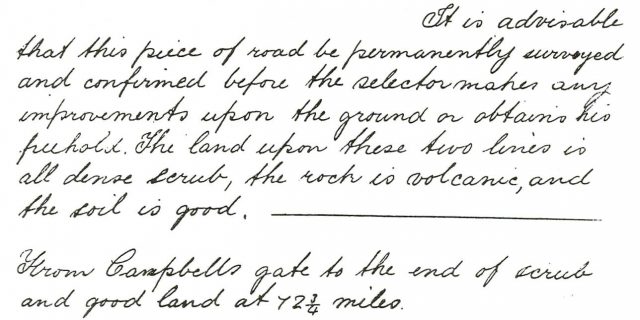 “It is advisable that this piece of road be permanently surveyed and confirmed before the selector makes any improvements upon the ground or obtains his freehold. The land upon these two lines is all dense scrub, the rock is volcanic and the soil is good.____________

From Campbell’s gate to the end of the scrub and good land at 72¾miles.”

He now found himself on a narrow ridge, with Baroon Pocket and the Obi Obi Valley on his left and the coastal plain on his right. He continued on, sometimes finding his way easier as he crossed blocks that had already been selected and were being cleared. He passed through what later became known as Razorback (now Montville), and headed north through the selections of G. H. Bury, J. Caton and J. C. Dixon, who had chosen their land not long before. Near a scrub tree, he saw a rough track coming up the Range to Dixon’s selection (now Flaxton) and plotted it on his map, marking it ‘To Namba Stn.’ This track also led to Cobb’s Camp as well as the Namba cattle station and is known today as Phillips Road. At some later date, the spelling on the chart was amended to ‘Nambour‘.10.

And it is this escarpment track between Balmoral Ridge and Mapleton surveyed by Alfred Delisser with all its bends and twists that is in most parts the road we drive today and as we contemplate the challenges of surveying and building this road we sometimes wonder at the names along the way.