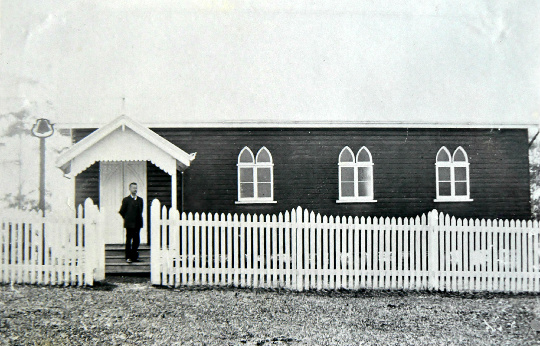 George Edward Brown was 21 when he arrived in Montville in 1906 with his parents and two brothers and four sisters. The family purchased an 80 acre property with established citrus. They employed a builder from Palmwoods to construct the house and it was called Craglands. George was granted a Lay Reader licence as a lay reader on June 25 1913. He provided the principle donation towards the building of the Anglican Church of £100. His money had been saved up for a trip home to his native Yorkshire, England. Although he never did go on this trip he continued to serve a wide district on horseback as preacher and Church Warden, The Church was built in 1914 just as war was declared and George was given the honour of naming the Church. It was probably named for St Mary’s Church in his native York. John married Ruth Seccombe in 1915 when he was 30 years old.

Over the next five years of wartime, the couple had four children. Their eldest son, John Francis Seccombe was born on 02 May 1917.

After leaving school, John worked on the family property and just before the outbreak of WWII he was invited to join the staff of the Committee of Direction of Fruit Marketing in Brisbane. John enlisted in the A.I.F. on June 4, 1940 at the age of 23.

A tribute to him published in the Village Crier July 1995 by Mrs C. Frost gives the following details: John was engaged in active service with his Battalion in many theatres of war including Syria, Tobruk, El Alamein, New Guinea and Borneo… In 1941, while a Sergeant, he received a Card of Commendation from General Wavell, … for his good services in action in Tobruk. In December 1941, his name was published in the London Gazette for being mentioned in despatches for distinguished service. He later received his commission as a Lieutenant and was engaged with his battalion in the crucial battle of El Alamein. His personal involvement in the heavy fighting which occurred during that campaign was recognized by the award of the Military Cross which he received in May 1943 … On returning to Australia he served in both New Guinea and Borneo until 30 October 1945 when he was discharged with the rank of Captain.

After the war, John left Montville to take a major role as Production Manager in establishing the Northgate Cannery later named Golden Circle Cannery. He was then appointed Managing Director until his retirement in 1982. In 1984 he was appointed Queensland Agent-General in London for four years.

Pat had a deep faith and became a Sunday School teacher and then a warden, a synodman and a Councillor for St Mary’s Church. He married Joan and they had three children, Hilary, Elizabeth Anne and Lorraine Mary. Pat had been diabetic since childhood and lost his sight as a result when he was 36. He had worked hard on the two farms on Balmoral Road throughout the War while his brothers were away. He had not been able to enlist because of his diabetes, but after losing his sight his sister Dawne and her husband Tony Barnett sold their pineapple farm at Palmwoods and came to live at and work the Montville farms. Tony recalls how Pat after he was blind used to sit in the shed determinedly making packing cases for the pines even though he had bruised and battered fingers. Pat was a Secretary for the School of Arts, a Trustee for the Sportsground, a keen tennis player. He loved the weekly dances at the Hall and the annual concerts.

Hilary was the youngest son and enlisted in 1939 at age 18. He served in the Middle East and Pacific Zones. He attained the rank of Sergeant. Hilary was killed in action on the Kokoda Trail in the Owen Stanley Ranges PNG in 1942.

Dawne grew up in Montville.

She married Tony Barnett. They established a pineapple farm in Palmwoods but sold it to help Dawne’s brother, Pat and her father to work the two Montville pineapple farms. Dawne and Tony lived with George and Ruth and raised their three children; Gay Elizabeth, Margret Ruth and Richard Anthony. Dawne played tennis and was an active congregationist at St Marys into her 80s.   Dawne was Montville’s oldest resident born in the district and living all her life as a much-loved member of the community. She passed away in 2018, aged 94.

For more information about Dawne please read the story ‘Dawne Barnett – A Life Well-Lived’ on our website.