“…on the 20th September 1902, at Mr Edward Smith’s House (the present Montville Art Gallery), to consider the question of building a School of Arts at Montville.  Mr E Smith occupied the chair and explained that he had received promises in support of the movement to the extent of about £67. (This sum was increased to £90.8.0, including proceeds from several ‘phonograph concerts’ arranged by H.Smith). The meeting approved the proposal, and the following gentlemen were appointed a building committee; Messrs Edward Smith, Alfred Bowser, Henry Smith, Chas.H Bundy and Hamilton Muirhead.  The plans and specifications were prepared by Mr William Skene.

The Building was completed on the 23rd February 1903, the work being done to the satisfaction of the committee.  The committee also arranged with Mr Whitecross for the supply of 24 seats, at a cost 14/- and 7/- each, the total for the 24 seats being £14.14.0.  The seats were all finished and placed in the building on the 11th March.

A Public Meeting was held on the 3rd of January to arrange the Trusts, and to appoint Trustees.  The following gentlemen were appointed Trustees; Messrs Alfred Bowser, Geo.J Butt Snr. and Henry Smith.

Owing to the early departure of Mr E Smith (the principal promoter), who is taking a trip to Europe and America, the committee decided to open the Institution as soon as possible after the building was completed, to enable that gentleman to be present.  I have the honour to be, etc. H Smith, Treasurer.”

The completed cost, inclusive of timber, roofing iron, doors, seats, labour and sundries, was £182.7.2  at 13th March, 1903. It is not immediately explained where additional ‘endowment’ came from.  Edward Smith did not wholly donate the land, there was a ‘land purchased’ item of £25.

In his next Treasurer’s Report of 10th September 1903, Henry Smith explained that ‘your committee thought it necessary to spend considerable more upon the building.  The chief items of expenditure were as follows, viz.  Purchase of timber for cealing  the Hall, lineing and arching the Platform’. (sic)

A table and bookcase were made, lamps were purchased, also fees were paid for insurance (£2.14.0) and conveyancing of the deeds.  A handsome split-rail fence was erected.

‘It was found that to carry out the works quickly & to pay accounts promptly, that it would be necessary to make arrangements for temporary accomadation until promised donations and the endowment was received.  Mr Edward Smith kindly offered whatever assistance may be needed in that way, without any charge in the way of interest”.

The Library at that point had 57 books and 66 magazines, and a table tennis set.  The quarterly subscription was fixed for the time being at 2/6, which entitled the subscribers to the use of one book each week, and free admission one evening each week, reading matter and games being provided.  Mr Fred Thompson was in charge.  People carried lanterns to the Hall to choose their books; the Hall was lit by candles and kerosene lights, and later carbide lamps.  It was quite a sight to see the lanterns bobbing along the road at night, until electric lighting came in 1939.   The Libraries & Reading Rooms Statutory Return for 1937 states 1007 books, not including magazines, and an operating profit of £12.0.0.

Somewhere between 1915 and 1921, the Hall was greatly enlarged, and the decorative barge-board replaced with a vertical lattice section in the front peak. The original structure extended only from the back of the stage to the side doors.

Excerpts from a 1921 newspaper:  “Armistice Day 1921 in Montville was marked in loyal style by the ceremony of unveiling the Memorial Gate and railing, erected in honour of those residents who enlisted in the Great War of 1914-1919.  The flag was raised, the school children sang “God Save the King”, hearty cheers being given by the assemblage.  Lollies, footraces, coconut shies, and refreshment stalls did brisk business on the green.  The Cricket Club’s new concrete practise wicket was also declared open, and the officiating councillors took first bat and ball.  Tea was served in the School of Arts, followed by an excellent concert, and the unveiling of a captured German machine gun.  The building was packed to its utmost capacity, and it is to be sincerely hoped, now we have such a noble gate approach, that a building worthy of it will be erected in the near future. Tea was again served, and dancing was afterwards kept up until 2 am”.

The Memorial Gate (1921) and pillars of Helidon Sandstone, and the halfcircle railing, were built by Andrew Petrie Stonemasons (Toowong) at a cost of £182.  Each gate pillar has a marble slab on the face, in which are inscribed the names of those who enlisted, those who died, and very loyally, those who were rejected.   (NB. The WWI honour board inside the hall dates from 1916).  The School of Arts has been used 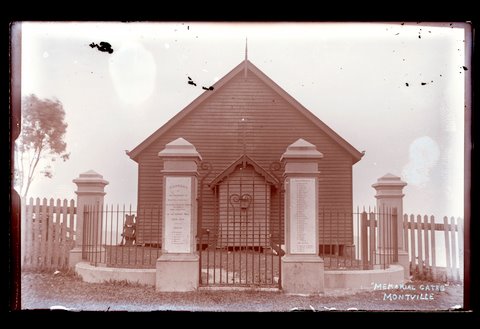 continuously for church services and Sunday schools, meetings, weddings (both services and receptions), funeral services, balls, dances, school assemblies, movies, concerts, art shows, flower shows, fashion parades, plays, Euchre parties, health & fitness classes, send-offs and welcome-homes.  People rode from Dulong to attend the dances.  It is ironic that the Salvation Army Barracks, built in 1897 just beyond the site of the Hall, and which was used for Worship services, was destroyed in a cyclone shortly after the Hall was built in 1903.

Excerpts from ‘The Chronicle’ 14th July 1905:  “A Very Pretty Wedding was solemnised at the Montville School of Arts on Monday afternoon, July 10, when Mr James Henry Ruddy, of Baroon Pocket, was joined in holy wedlock with Miss Lily May Laverick, of Montville.  The Rev. W H Shenton officiated.  Upwards of 110 guests sat down to a sumptuous repast provided by the bride’s parents.  The School of Arts was taxed to its utmost to accommodate the dancing fraternity, and the floor was in excellent order.  Mr J Woot was MC, Mrs Cambridge & Mr Garrick (piano), Messrs Simpson, Butts and Weitemeyer (accordion) supplying music.  Mrs W Skene, Messrs Dowds, Muirhead & Webber contributed vocal selections, and it was not until break of day that the lights were lowered.”  (They had Stamina!)  The article goes on to describe the bridal costumes, and to list all the presents which were ‘very numerous and costly’.  The presents ranged from, ‘Mr & Mrs R Laverick (the bride’s parents), 80 acres of land (improved) with a four-roomed house’, to a pair of leghorn fowls, 12 months Chronicle issues, and a ‘ladies companion’.

Mr & Mrs James Ruddy were to become parents of a baby girl, Ruth Madeleine, who still lives in what was her parents home in Mill Hill Road, our much-loved Madge Glover.   (Madge now deceased, 2007)

A Solemn Service was held in the School of Arts after the interment of Henry Smith’s daughter Mabel, who died suddenly in Sydney in 1910, aged 18.  Her body was brought home for burial at Mapleton Cemetery.  The mourners grieved also for the families of Ellen Mathers and Tom Weitemeyer; these three young Montville people who had died within days of each other.

Alf Short was a stalwart musician for functions; he began playing in 1928, soon after leaving school, with his button accordion and mouth organ.  He joined in entertaining the troops in the area during the war with Mr Wal Potts, who played a portable pedal organ. Alf formed two bands around 1987.

A Pastime Club was formed by the Church of England sometime in the 1920’s for the young people.  Dancing, Badminton and Table Tennis were indulged in, and many visitors staying at the guest houses joined in the fun.

The First Anzac Day Commemoration was held in 1930.  Instructions in format, etc. were obtained from Brisbane and a committee elected.   Due to the passage of time and interested members leaving the district, no services were held after 1964, until the tradition of the Dawn Service was revived in the 1990’s.

A Boy Scouts group was formed in 1933, & Junior Red Cross during the War years.

A Junior Farmers’ Club was active in the 1950’s, there were overseas exchanges, and Montville was a regular winner of the Shield for Citrus Fruit at the Brisbane Exhibition.  Their major fund raiser was an Annual Debutante Ball, a gent’s ticket cost 7/6 in 1955, ladies 5/-

The Country Women’s Association met regularly for more than 60 years.  The Montville Ladies Social & Benefit Club was active for fifty years, and contributed many thousands of dollars and hundreds of hours of volunteer time to the community. Many of the Hall facilities were provided from fundraising and catering of functions by these ladies.

Many clubs and associations had their early meetings in the Hall, then went on to establish their own headquarters or clubrooms, eg. Montville Bowls Club(1940), The Bush Fire Brigade, Masonic Lodge (1918), the RSL, Blackall Range Care Group (1986), and others too numerous to mention, and some not recorded.

Around the late 1950’s, the supper room/verandah was added on the eastern side, incorporating a kitchen annexe just 2 metres by 3 metres.  It was still necessary however to do a circuit outside the building for certain entries on-stage.  Many excellent amateur theatrical productions had to be adapted to allow for wet-weather logistics.

In 1976 the kitchen was enlarged, it was then about 4 metres by 3 metres, with one-way traffic around the table!  It was only in 1999, after many years of fundraising, that a very practical extension was built, providing a dressing room, stage-lighting, a hallway, storeroom and toilets around the stage, and a kitchen upgraded to a spacious commercial standard.  Many of the original (& exquisitely uncomfortable) wooden benches were sold, and 120 new stackable chairs were purchased , with the assistance of a Jupiters Casino Grant.

There is no immediate information as to where the first piano came from.  Mark & Linda Penman, from the Queensland Conservatorium, masterminded a series of spectacular BUNYUP fundraising concerts in the 1990’s (Buy Us a New Yamaha Upright Piano), with some wonderful visiting classical performers.  (Postscript August 2010….Have just seen a newspaper mention of Miss Zoe Penman playing in her school band in Brisbane.  Who remembers a very pregnant Linda singing “I’ve got you under my Skin”?

When it was first built, the Hall was an isolated building on a bare edge of the escarpment, looking across the Reserve to the School.  Now it is the centre of the Historical Precinct, approached by a shady Memorial Close, and surrounded by St Mary’s Anglican Church, its beautiful Memorial Garden and lookout, and the Village Green and St Mary’s Hall, previously the RSL Hall.

Now in 2018, 115 years since it was built, The Montville Village Hall is about to expand again with the addition of an eastern deck to provide for the many functions hosted at the hall that require catering services. In particular the monthly pancake breakfasts at the Montville Growers and Makers Market, weddings, art shows, concerts and so on.