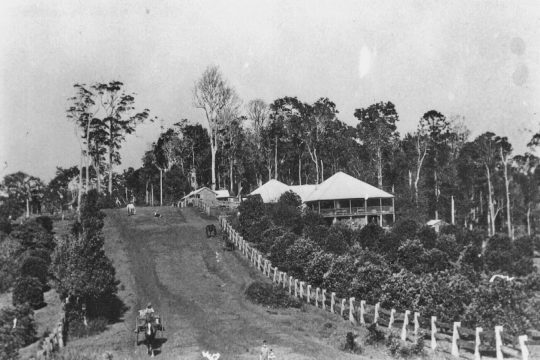 ‘Belbury’ once known as ‘Eastnor’, is again on the market (2018). Part of Montville’s early history, this beautiful historic home (with its 2.5 acres – once part of a large citrus orchard) was built in 1895 by Henry Smith, an early Montvillian pioneer.

The original 1895 home was named ‘Eastnor’ by Jane, Henry’s wife, after Eastnor Castle in Herefordshire, England, where she had been employed before making the long sea voyage to Australia. She described the very first house Henry built for the young family in 1893 as “a 12 x 15 foot slab hut with a shingle roof, earth floor and slabs smoothed for tables and chairs.” (1) That is about 4 x 5 metres which these days would make a nice bedroom…..

The house held Montville’s first post office which opened as a Receiving Office in 1897, before becoming a Post Office in 1910. It also was a shop and a bank too!

It was in this house that Henry installed the first telephone line in 1912 so that his house and Palmwoods shop could be connected. “The arduous task of stringing the single line from tree to tree (Montville to Palmwoods) was undertaken by his sons, Alf and Tom, along with Bill Phillips.” (2)

The old packing shed, once used to house and pack the citrus fruits grown on the property by the Smiths, remains in place. And another highlight is the authentic railway cottage moved from Palmwoods Railway Station and integrated into the property.

The house was renamed ‘Belbury’ in 1979 by the Russell family who also sold part of their land to the Sunshine Coast Regional Council as it is now called to ensure parkland was held in trust for the community.

Some years ago, the community hoped the Council would buy the property and turn it into a museum and art space for the local area. This did not happen and it was sold to the current owners.

Since 1895, only five families have lived at Belbury. This wonderful home is imbued with 123 years of lives lived courageously in an ever evolving world, and a sense of history always in the making.

For more information about the history of the house and about Montville and its pioneering families, copies of Cate Patterson’s very informative and well researched book, ‘The Smith Family – from Birtsmorton to the Blackall Range’ (1) (2), can be found at Mapleton Community Library and Nambour Library.