Who doesn’t adore the camellia? This beautiful, sometimes blowsy, always bountiful blossom is the kind of flower that wins hearts and artistic kudos all the times.

Once upon a time, Montville had its very own Camellia Festival. As we all know, camellias grow wonderfully well here on the Range – we are blessed with the kind of soil that many trees, shrubs and flowers thrive in and the camellia is just one of many. But, and it’s an important but, the camellia is no ordinary flower – she is big, or small, bright, pale, single or double, white, pink, magenta and all their radiating colours.

And so it was that in 1982 a group of women, led by Jean Capper, decided that it would be lovely to hold a local festival around the camellia. Jean and her husband Ned who were originally from western Queensland lived in an old house in Balmoral Road. Their garden contained many camellia trees so it was obvious that this was going to be a useful place to start thinking about the festival.

Jean was a staunch member of St Mary’s Anglican Church and its Guild (which is now known as the St Mary’s Auxiliary). And one of her early recruits was Dawne Barnett who, along with her then young daughters, Gay and Margaret, helped support the Festival in those early years. Dawne (whose father was George Edward Brown and uncle was Francis Cecil Brown) went on to became very involved in the event. She was a past president of the Montville CWA and the St Mary’s Guild. She played an important role in many aspects of the community.

The flower contributors to the event were myriad. Enid Rogers owned a farm off the Palmwoods-Woombye Road. She was very knowledgeable about camellias and could tell anyone what their particular species of flowers were. She had between 50-80 camellia trees and adults and children alike would spend the morning before the event helping her pick the blooms.

Another well-known Camellia garden was in Western Avenue. Naida and John Watkins had many camellia trees and a troupe of ladies would congregate there and pick the flowers off the trees.

On the corner of Flaxton Mill Road is a beautiful old house, one of the original Queenslanders on the Range. It was once known as Chermside, though before that it was part of the dairy farm situated there. Now it is known as Tanderra and the garden here still has some beautiful and rare examples of camellia trees to be seen. These blossoms also made up wonderful plates of camellias.

Along with Dawne and her daughters, there were other early helpers including Helen Baker, Gwen Walker and Estelle Rann. There were many other volunteers over the years: Jean Shannon, Margaret Young, Sue Delaney.

The first events of that one-day festival were all held in the Village Hall. Tables of flowers and food and a stall were all set up in the hall, filling it with scent and sound.

Advertising took place via the Church grapevines and over the years the Montville Camellia Festival became one of the important flower festivals to put into one’s calendar.

In the beginning there would be tables and chairs set up for lunch which was served by volunteers of the then St Mary’s Guild. Lunch was included in the price of visiting the Festival which was $5.00. A raffle would also take place, invariably this was a beautiful locally made quilt. Other quilts were put on display for viewing pleasure. Glenn Strahan and Margaret Young were just two of the contributing artists.

Time came when the Church was commandeered into the Festival and camellias filled its interior along with a display of quilts.

Eventually there were so many blooms being brought in for judging that more room was needed and in about 1988 a marquee was hired from the Montville Village Association. Parishioners from the church moved the blooms into the marquee and food continued to be served in the Hall, along with a produce stall.

A fashion parade and talk were also added to the Festival, with clothing being supplied by local fashion houses.

Judges were drawn from the number of knowledgeable Hinterland camellia growers and also from the Queensland Camellia Society Inc. based in Brisbane.

Busloads of people came up from Brisbane and the festival was assured of revenue. It was a very popular event and one of the many interesting speakers was Peter Cundall from Gardening Australia.

In its final incarnation, the event included an art show and eventually the Camellia Festival was a two day show incorporating the Camellia Competition Show and the quilt show being held in St Mary’s Church and the Blackall Range Visual Artists holding a display of their work in St Mary’s Hall, which also included a wonderful Devonshire Tea. Who wouldn’t have wanted to spend an afternoon or two looking at flowers, quilts and other works of art!? 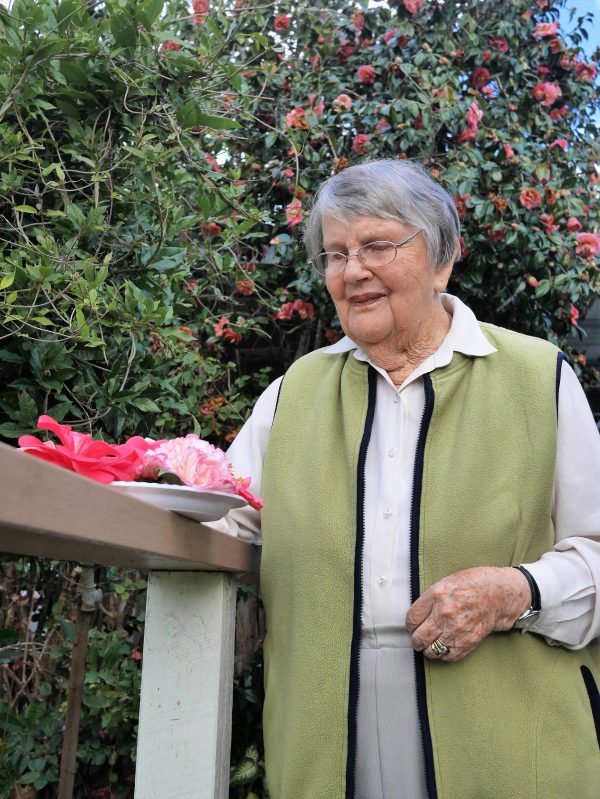 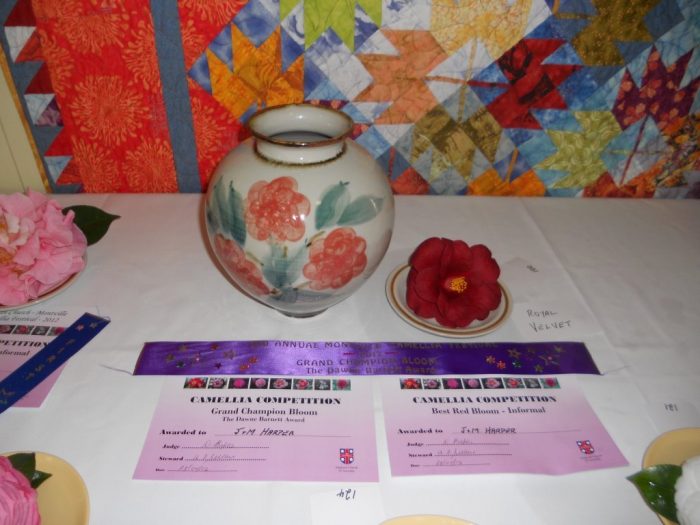 (With thanks to Gay and Margaret, daughters of Dawne Barnett who I coerced into having a photo or two taken surrounded by her lovely camellias.)