Her father George Brown was a Yorkshireman, who came to Australia with his parents and siblings and settled on an 80 acre property in Montville in 1906 with his family. It was here that the family home was built – it was called Craglands. The family farmed citrus, as so many other people did in Montville.

George became a licensed lay reader and he served at Montville and Maleny Anglican churches and, when required, he would ride his horse to Kenilworth church and lead the service there. He provided the principal donation of £100 (about $10,600 today) towards the building of St Mary’s Anglican Church in Montville, which was designed by the architectural firm of Francis Hall and Robin Dods in 1913. This was money George had saved up to return to Yorkshire, but he did not go back.

The church was built in 1914 and George was given the honour of naming the church.

In 1915 he married Ruth Seccombe. They had four children, and Dawne was the youngest.

Dawne attended Montville Primary School and St Margaret’s school at Ascot in Brisbane, where she completed her schooling at the age of 16 in 1940, just after WW2 began. St Margaret’s motto is ‘Born to Fly Upwards’ and so Dawne did, flying back upwards to Montville. She returned home to help her parents and Pat on the family farm as her two other brothers went to war.

She joined the Australian Women’s Land Army which was set up to help with the shortage of agricultural labour as men went to fight overseas.

Dawne had her share of sadness and of fears. In 1942 her brother, Hilary, a Lance-Corporal in the Australian Army, was killed in action at the age of 21 on the Kokoda Trail, and her brother Pat who had diabetes as a child went blind as a young adult. Twice her eldest brother, John, was wounded in action; fortunately, he survived.

Craglands had its own tennis court and a tennis club grew out of this.[i] Dawne became a great tennis player, winning a number of singles and doubles titles. She developed a curious habit, in later years, of throwing her racquet at the ball in the surety that contact would happen but it rarely did. This did however have the effect of making people laugh, somewhat mitigating the fact that tennis is a highly competitive game!

And it was during a tennis match in 1947 in Palmwoods that Dawne met Tony Barnett, whom she went on to marry in 1950 in St Mary’s Church.

Rural courting in those days was hard work. Tony would walk from Palmwoods to Montville and home again, so that he and Dawne could go dancing or have tea. While that is only about a 10km distance, made easy by a car on today’s bitumen roads, in the late 1940s the road was not only steep it was also unsealed. This is truly a great demonstration of Tony’s love for Dawne. How many of us would do that now?

After their marriage, Tony and Dawne lived with Tony’s parents in Palmwoods, where they helped work their pineapple farm. However, due to Tony’s father’s ill health, they sold the farm and they all moved to Montville, where Tony’s parents then retired.

Tony and Dawne moved into Craglands, so that they could help with the two farms owned by George and Ruth. Dawne helped her mother run the household, and she and Tony both worked with Dawne’s father and her brother Pat to run the farm.

Tony and Dawne had three children – Gay, Margaret and Richard.

In the late 1960s, Tony began to build a new home for his family on the farm. By late 1974 the house was finished, with Dawne painting the interior. Margaret recalls her mum saying many times, even in the days leading up to her passing, “Your father did a wonderful job building our little house, didn’t he?”

In 1985 the original Craglands, by now infested with borer and slowly declining, was dismantled.

Dawne became very involved in the community of Montville. She played the organ and taught Sunday School. She was a co-founder of the Camellia Festival and a Past President of the St Mary’s Guild, for the church was a huge part of her life. She attended church every Sunday, and for many years she supplied and arranged the flowers in the church. She loved flowers and even in her last few weeks she was still arranging flowers in her home. Dawne was also Past President of the Montville CWA. Perhaps being born on the Range made her utterly dedicated to the community here; whatever it was, her selflessness shone through for decades.

Ben and Matt, Dawne’s grandsons, remember the games and the first class food. Easter and Christmas holidays on the farm were cherished by them. The farm with its rolling hills and pineapple fields, trees laden with mandarins, macadamias and berries, the creeks and waterfalls, working with their grandfather Tony in his shed, and what they referred to as ‘almost a religion in itself … five square meals a day, including morning and afternoon tea.’

Easter-egg hunts, homemade porridge, hauling a small pine tree from the bottom of the farm up to the house and decorating it for Christmas, long, lazy games of cricket and lawn bowls, Scrabble and Pictionary contests, the yearly ritual of picking the Camellias for the Festival.

In 1985, Dawne and Tony took their first overseas trip (to the UK and Europe), accompanied by their daughter Gay. Then in 1990, Gay and Margaret travelled with Dawne and Tony to Canada to attend Richard’s wedding to Karen. There were several more trips overseas, which Gay says were all meticulously planned by Dawne.

Tony and Dawne also travelled around Australia. But as Gay remembers, they always loved coming home to Craglands and Montville. Dawne saw many changes to Montville and the Blackall Range through her incredibly long and well lived life.

And as a matter of interest, did you know that Ruth and George began to monitor and officially record the rainfall in Montville in 1910? The data was collected by the family until 2010, when they were given a 100 Year Family Excellence Award. (The weather station is now closed.)[ii]

For more information about Dawne’s parents and siblings read the G.E. Brown Family story on our website.

Thanks to Gay, Margaret, Richard and Ben and Matt for letting me use their lovely eulogies to their Mum and Nanna.

Dawne and Tony on their Wedding Day 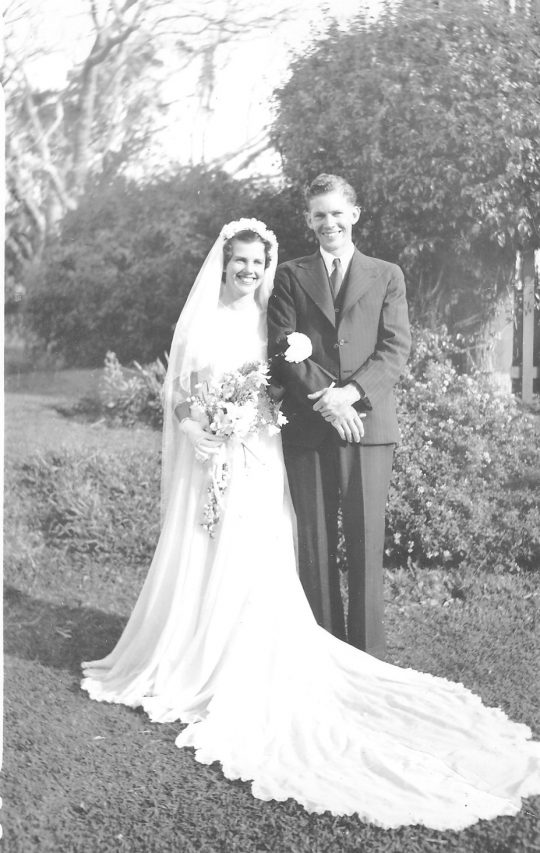 Tony and Dawne married in 1950 at St Mary’s Church, Montville