The old Flaxton Provisional school was situated where Blackall Range Care Group now stands at 362 Flaxton drive. Entry to the school yard was a few metres south of the driveway to ‘The Limit’. The slope leading to ‘The Limit’ homestead was planted in pineapples and there was an old packing shed almost opposite the school. Just beyond ‘The Limit’ homestead was a cottage and most of the Flaxton teachers lived here. It was a short walk to school. From memory, my teachers, 1944 to 1949 were: Miss Callow; Mary Sunberg; Anne Sunberg; Gloria Nonmus and Herb Bell… . In 1922 when it was built, the government of the day said they had no money to build it but the community could raise the funds and do it themselves, and that is exactly what they did. It therefore belonged to the community and when school wasn’t in, it served as the venue for dances, concerts, meetings, church services, send-offs and welcome homes, red cross and CWA gatherings and much more.

Later next year I hope to complete research at State Archives and write down the history of Flaxton Provisional school. 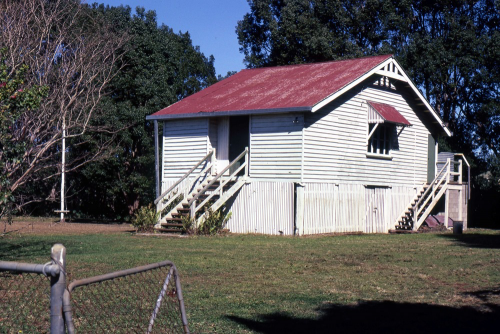 Flaxton School with verandah closed in

This photo of the school which shows both sides of the front verandah walled. Originally only the southern end was walled; this is where we hung our bags, rain coats etc. The other half was open and railed with doweling balusters but I have not been able to find a photo old enough to show this…to the left were two tennis courts. To the right, a cleared play area with a flag-pole close to the school steps. A fence on the Mapleton side separated the school grounds from Mr. Moore’s pineapple plantation which became later, Flaxton model village. Behind the school, boys and girls outdoor dunnies with the back boundary defined by a tall hedge with a stile in the middle to get through. At the back of the play area stood a black-bean tree and just beyond that, slit trenches dug during WW2 when the fear of Japanese invasion ran high. Further back there used to be several tall trees including some silky-oaks. These were planted by the students on arbour days which was then a big event observed by most schools. If you turned your back on the school and looked east, there was a packing shed across the road and beyond that, Lay’s pineapple plantation leading up to their house, ‘The Limit’. A cottage which most of the Flaxton school teachers used to rent, sat just beyond ‘The Limit’, over the edge of the range.